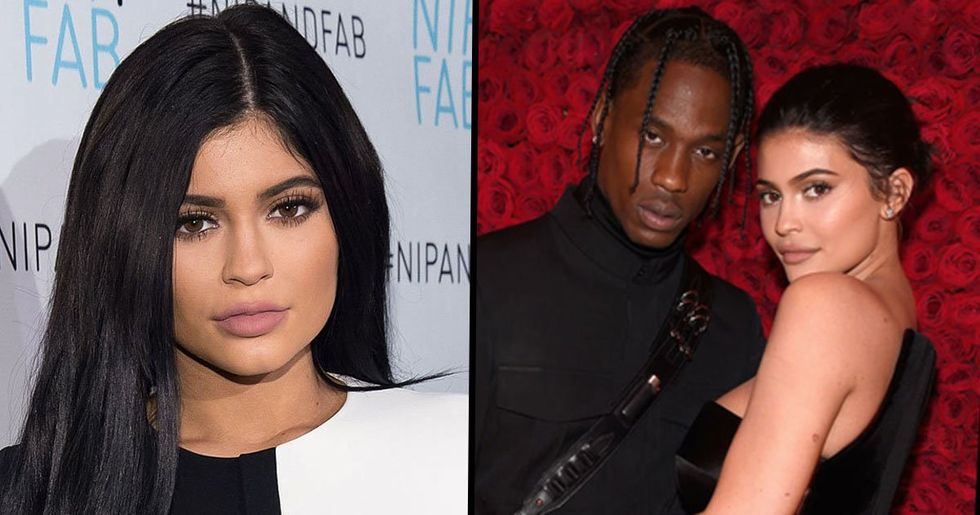 When it comes to celebs, we all love to speculate about their private lives - especially when it comes to their relationships. Fans want to know everything - if it's on or off, if a baby's on the way or if marriage is on the cards. Basically, we love to take a peek behind the curtains of our favorites celeb's lives.

And, of course, Kylie Jenner, the youngest of the Kardashian/Jenner clan, is no exception.

Her relationship with rapper, Travis Scott, has been put under the magnifying glasses of the tabloid press and fans alike, and it seems the latest snaps of the star have sent rumors swirling around the internet.

As the star jetted off to celebrate her 22nd birthday, fans noticed a wedding dress in the shot. And, let's be honest, if she can hide her pregnancy from the public for months, she could easily hide her wedding plans, too.

So, is it wedding bells for Scott and Jenner? Keep scrolling to see the pictures in question.

Kylie Jenner really does seem to have it all.

Growing up in one of the world's most famous families, she was bound to live a blessed life. After all, from birth, she was already destined to be richer than most of us will ever be.

Although it has to be said, no member of the Kardashian/Jenner clan goes without.

Since their reality TV show, Keeping Up With the Kardashians, catapulted the family to stardom, they've all enjoyed the finer things in life.

Although Kylie is definitely one of the most famous of the sisters.

Her cosmetics line, Kylie Cosmetics, earnt her the title of Forbes' youngest self-made billionaire ever earlier this year. Although we all know self-made is probably a bit of a stretch.

Anyway, it's clear that Jenner enjoys her cosmetics-induced wealth.

Her Instagram is an ode to her lavish lifestyle. She can be found regularly posting snaps of flash cars, luxurious getaways, yachts, and, of course, high-fashion ensembles.

And it also seems that Jenner has found love.

The star met her boyfriend, rapper, Travis Scott, in 2017. People first spotted the pair holding hands at the Coachella music festival, which, of course, sparked romance rumors. Over a year later, in an interview with GQ, Jenner revealed that after the rapper's Coachella performance, she decided to go on tour with him and enjoy the new relationship with a bit of privacy.

They were spotted during various outings together, but, most prominently, things got serious when Jenner was seen traveling to Houston to meet Travis' family, followed by watching a Rockets game together before apparently attending an after-party that evening.

A month after going official, the pair took the plunge and got matching tattoos.

They both got tiny butterflies on their ankle - a reference to Scott's song "Butterfly Effect." The fluttery insects have since become an ongoing symbol in their relationship.

Since going Instagram-official, Jenner regularly posts snaps of her man.

When it goes on social media, you know it's serious. The pair seem completely smitten with each other.

They even have a child together.

Despite being in the limelight, the pregnancy was, for the most part, kept a complete secret.

The pair kept the pregnancy under wraps from the prying eyes of the public before eventually releasing a YouTube video titled "To Our Daughter," detailing the pregnancy, along with an Instagram post revealing Stormi's birth that basically broke the internet.

Although some detective fans did suspect that the star was pregnant.

She was papped at a party, with fans noticing a baby bump. But, considering she's literally one of the most famous people of this generation, she did a pretty good job at hiding the whole thing.

But, the relationship has had its rocky patches.

Looks like Scott only has eyes for Kylie. Whether you're a fan of the pair or not, it seems like a pretty cruel jibe to mess with someone's relationship like that.

And, of course, the rest of the Kardashian clan spoke out for their little sister.

After the cheating scandal turned out to be caused by a load of pranksters who created the snaps as a joke for a YouTube video, Kim Kardashian took to Twitter to slam the jibe - branding it "disgusting."

Despite the odd fake scandal, the pair always come out on the other side stronger.

There's no denying how loved up they are, with Jenner proudly showing off her family on Instagram. Did we mention how adorable Stormi is?

The couple are also known for spoiling each other.

From renting out entire theme parks to $60,000 necklaces, the pair certainly express their love for each other in the more extravagant of ways.

Even Stormi's caught onto to their luxurious ways.

Jenner shared this snap of her daughter sporting the cutest designer handbag.

Although, recently, the couple landed themselves in bother after Scott's "romantic" gesture.

Ahead of Kylie's birthday, the rapper filled her house with roses, like literally thousands of roses.

But the extravagant gesture drew in a lot of criticism.

Many people thought it was a gross flaunt of wealth, not to mention all the waste the gesture would generate. Although, you have to admit, flashy or not, it's obvious that Scott likes to spoil Jenner, especially in the lead up to her 22nd birthday.

So now we've established how smitten the pair are, it wouldn't be far fetched to expect marriage to be on the cards soon, right?

Well, it seems fans already had a feeling that the couple will get hitched soon - with speculation ramping up ahead of Jenner's birthday. Romantic birthday wedding maybe?

Well, perhaps that's exactly what's going to happen, as pictures have surfaced of Jenner boarding a jet with a suspicious white garment in tow.

As they jet off to celebrate Kylie's birthday, snaps appear to show a wedding dress peaking out of the pair's luggage.

Take a look at the picture in question for yourself...

It certainly looks wedding dress-y, right? And, let's be honest, she could easily keep a wedding under wraps given she kept her pregnancy a complete secret. Plus, TMZ reported that a suit was also spotted in the luggage.

Although it does seem pretty careless to have the garment so obviously on show.

It's probably best to hold off on the confetti and party poppers, as this is where the first doubts creep in. Why would she leave her wedding dress so exposed when she knows the paparazzi are watching her every move? Plus, Kylie is notorious for loving a good joke.

Also, Kim and Khloe are reportedly not joining the family for the celebrations.

Which would be strange if she was actually getting married. Surely they would want to be there to watch their little sister walk down the aisle. Also, sources close to the family have reportedly said that the pair are not getting hitched.

So, is it just another publicity move? Or a genuine slip-up? We guess we'll have to wait to find out.

Could the garment be just a puffy white party dress? Or maybe it really is wedding bells for the couple. Either way, we're sure we'll find out when the inevitable birthday snaps pop up on Kylie's Instagram.

But Kylie hasn't just been hitting the headlines for her relationship with Travis Scott.

People are obsessed with the way the star looks. From her infamous lips to her figure and ever-changing locks, people can't stop talking about her. After the star posted a fully nude snap to her Instagram, people could only notice one thing - and this time it wasn't to do with her physique or her lips... it was about her feet. Yes, people couldn't stop trolling the star's feet, pointing out how weird they looked. Keep scrolling to see what all the fuss is about...