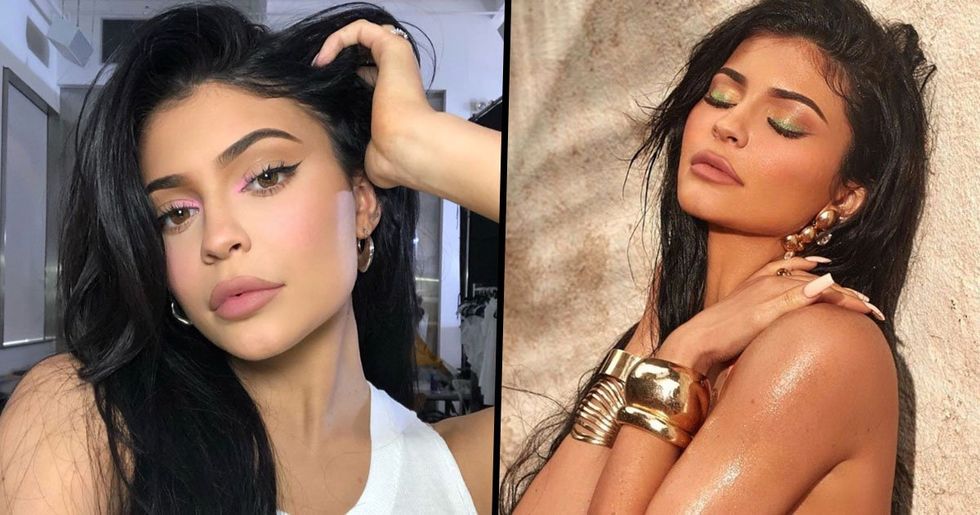 Kylie Jenner has taken the internet by storm once again with yet another nude photo. I mean, we should all be used to the Kardashians and their risque photos by now, but, somehow, they always manage to stir up a little chaos.

This time, the social media star has managed to gain attention for a slightly more bizarre reason... her feet. Fans can't seem to understand why they look so weird in this one particular photo and neither can we, to be honest!

Kylie Jenner and her friends embarked on a lavish trip.

The girls took a private jet to Turks and Caicos for a good ol' beach getaway.

I have to admit, Kylie doesn't take a rest, does she? If it's not a new lip kit, it's a new brush set, and if it's not a brush set, she's releasing a new line of body lotions! Goddamn!

The range includes everything that you could ever want in the hotter months, from body scrubs to sunscreen oils.

But, you guessed it, it's all a little overpriced.

Why wouldn't it be? It's Kylie. Prices range from twenty-four dollars to eighty dollars in this new range of skincare products.

Regardless, fans seem to be extremely excited about the news!

Some have been waiting for the products to become available since Kylie made the initial announcement. It's all about being a loyal follower to the beauty guru.

Her new line will be available from July 22nd on her official "Kylie Skin" website.

Everyone seems to be counting down the days now... And with the release of each new photo, the excitement just gets more and more intense.

Her previous "summer '19" collection looked amazing, so it's no wonder that everyone's pretty hyped!

Whether you love Kylie as a person or not, you have to admit, she knows how to run a business. The teaser pictures for her previous summer collection looked absolutely stunning; it's really no wonder that they sold out immediately.

And her new teaser photos didn't disappoint either.

A lot of the videos are now unavailable on Twitter as they go against the guidelines of the platform, but they are still available to watch on Kylie Jenner's personal Instagram. People have described them as extremely "raunchy." Keep scrolling to see the video that gained the most attention for its risque nature...

It doesn't stop there! Being the great friend that she is, she organized the whole trip!

Of course, her besties were there to celebrate with her. Sofia Richie, Scott Disick's current girlfriend, was also in attendance and the gang posted a whole array of photos that grabbed the attention of fans.

From photographs at the villa...

Here we have Kylie and her bestie, Anastasia Karanikolaou, looking fierce as ever. Has baby blue ever looked so good?

This picture shows two of Kylie's friends with her daughter, Stormi, who also joined them on the lavish trip.

However, there was one particular shot that turned heads instantly...

A bare-all photograph of the social media star. The only thing that she was wearing was an extremely oversized, beige fedora hat. Nothing else.

You would think that there would be global outrage about the fact that she was nude...

Well, I mean, there was. People were shaming her for "promoting" such a shallow lifestyle to her younger audience, but, to be honest, Kylie Jenner is entitled to do whatever she wants to do. It's her Instagram account. Are you really surprised that she posted a nude photo?

But something else entirely stole the show... her feet.

Kylie's known for her outstanding body. Yes, most of it is probably plastic, but the surgeon did a pretty good job, if I do say so myself. However, people couldn't help but notice how long and curly Jenner's toes looked in the photo...

Fans quickly jumped on the star because of her weird-looking feet.

"Have they been photoshopped?"

People couldn't help but speculate if Kylie had work done on her toes or if they looked weird because they are the only part of her body that haven't been cosmetically enhanced.

Others jumped to the star's defence.

This Instagram user commented: "you do know, things come in different sizes on different people." It's true, I mean, they're just toes, right?

Even Kylie noticed that people were talking about her feet...

I bet she's used to people talking about other parts of her body. Kylie seems pretty confident with her body on social media, so she did what she does best...

She clapped back at the haters.

She replied to the original comment saying "leave my toes alone." And, get this, her response got over 8 thousand likes in 24 hours! So, next time you try to come for Kylie, expect some backlash from her fans as well as the beauty guru herself!

Here's a look at Kylie's "raunchy" launch video for her new skin products!

The collection is available to purchase from the official website on July 22nd. Happy shopping!