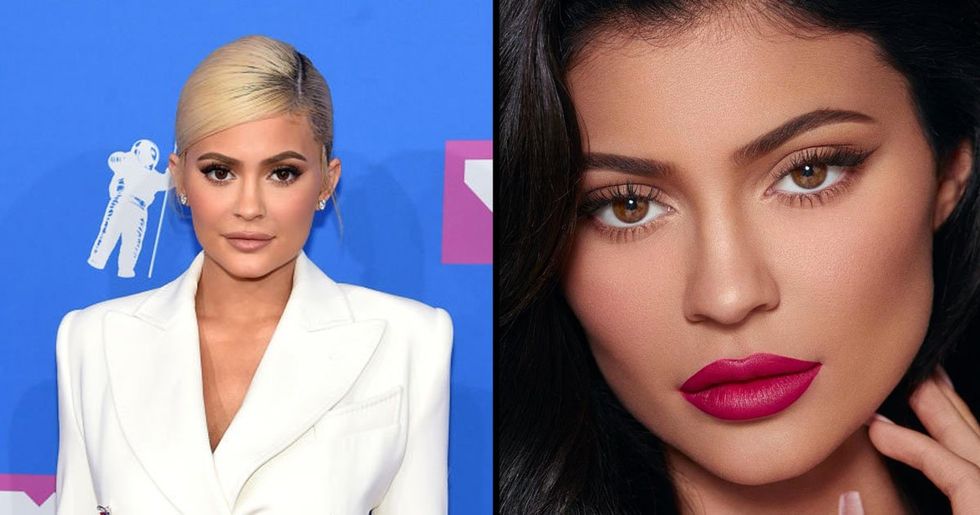 It's so refreshing to see celebrities without a hundred layers of make-up. When the #NoMakeup and #NoFilter hashtags appeared a few years ago, celebrities joined in to inspire others to go make-up free.

This year, we've also been finding A-list singers, actors, and models among the #NoMakeup crowd. And Kylie Jenner may have just been crowned queen of the no make-up selfie.

A few days ago, Kylie talked to Interview about her job as a "role model," and how social media makes it all so much more difficult. It sounds like if she could put down the phone and live in the moment, she would. But social media is the driving force behind the speedy growth of her business, and it's just not something that she can abandon.

Make-up has always been Kylie's safety net. So seeing her, bare-faced, going out for lunch is a rare sight. But when Kylie later shared a no make-up photo herself on Instagram, it really did prove that she is serious about being a role model.

More and more, celebrities are choosing to post make-up free photos for their fans to see.

Every one of them has their own reasons for it, but usually, it’s to inspire other women (and men!) to feel confident in their own skin.

Here are the breathtaking, no make-up snaps that celebrities have taken so far in 2019.

Lady Gaga showed off her natural glow and the one-hundred and forty-one year old Tiffany diamond, last worn by Audrey Hepburn, in preparation for the Oscars.

In the caption, she wrote, "#nofilterFriday #nomakeupday #lovemeasIam ???" We, too, love you as you are.

The strong and gorgeous Kesha posted this beautiful picture.

And her caption was just as beautiful: "This year my resolution is to love myself... just as I am, all fucked up and imperfect and whatever else. And to let my freckles liiiiiiiive ????????????" Ladies and gentlemen, take notes.

Jessica took the photo while getting ready for a crazy weekend, it seems: "Love you Boo @shanidarden thank you for hooking up mah face! Feeling Hydrated and ready for the freakin weekend ??‍♀️??‍♀️"

She wrote, "This is how I start most of my mornings off— in grounding and gratitude and asking for clarity. Envisioning the day and putting light around it."

Kourtney Kardashian shared a pic of her during her goofy "Me Time."

Kourtney was having a beauty night with her sister Kim who, she wrote on Instagram, "convinced [her] to use this face mask" and it made her "feel stunning."

"Vacation is for not combing your eyebrows," she wrote unapologetically. We totally agree!

Lana Del Rey is clearly not yet feeling any "summertime sadness."

Taking a break from her signature cat eye black eyeliner, she wrote, "DIY forever ???? or...."

You'd think a famous model like Tyra would know she's stunning wherever, whenever. But under the gorgeous picture, she wrote, "Lookin' like my son ??"

"This is me, right after my first Tabata class. The joke was on me. I thought my friend said meet for ciabatta. This pic is #nomakeup #nofilter and probably the last time I will be upright for the rest of the week. (If anyone needs me, I will be soaking my body in epson salts) The sweat is real people, so is the pain."

She posted a tribute to her husband, saying, "Be mine @bradfalchuk ❤️"

Kris was having an "early morning (and I mean early) haircut with @mrchrismcmillan" and she looked great!

It seems she's been getting a lot of fresh air, because she wrote "Thank you sun," grateful for that stunning mid-March glow.

Lili isn't a stranger to midnight snacks. She wrote, "When I wanted eggs and toast at 1am." You look gorgeous, Lili!

And, of course, Julianne Hough, who never has a bad hair day is just as beautiful without make-up as she is with it!

"Morning cuddles with my love❤️" Guess she does "wake up like that."

Earlier this week, Kylie Jenner joined the 2019 no make-up list, too.

Just a few days ago, Kylie talked to Interview about being a role model and the influence social media has on it. When asked if she considers herself to be a role model, Kylie admitted, "I feel like I felt a lot more pressure to become a role model when I had my daughter because I know she’s going to look up to me and I want to be the best example I can be."

But social media is, frankly, exhausting.

"I can’t remember the day when I didn’t have millions of people telling me their opinion on everything that I do, so I have no idea what it would be like for that not to happen."

"It does get to me sometimes but I feel like God put me in this position because he knew that I could handle it."

However, you can't deny that social media is the reason behind Kylie's billionaire status.

What would Kylie do if social media wasn't such a big part of her life?

"Honestly, I would love to just put my phone away and live in the moment," she admitted.

Since Kylie has been on Keeping Up With The Kardashians for twelve years now, Interview wondered if she would ever let her daughter be on reality TV too.

Kylie's response was top-notch: "I am going to wait until she is old enough to make that decision for herself."

As for how she hopes to be remembered, she said: "I hope people will remember that I pushed boundaries, inspired them, worked incredibly hard, set trends, and made history with my business – all at a young age."

"I hope to inspire other young women to know that there are no limits and to work hard for what you believe in."

On Monday, Kylie was spotted with a friend on their way to lunch.

ELLE says she was make-up free - a particularly rare sight when it comes to the make-up industry mogul.

The orange track suit she wore that day complemented her "can't be bothered" look and she pulled it off like no other...

It is quite a different outfit choice for Kylie. No make-up, no tight dress, and hair up... but she did look great!

At Sugarfish, where they had lunch, some fans were lucky to get a selfie with Kylie.

Perhaps to show that she’s serious about her job as a role model, she later posted a no make-up photo to inspire other women to love themselves for who they are.

"Skin," she wrote in the caption, adding a sparkle emoji.

Some fans were celebrating Kylie for her bold move, complimenting her flawless complexion and the empowering act of posting the photo for each of her one-hundred and thirty million Instagram followers to see. Others, however, were not so complimentary, claiming that Kylie is not inspirational for posing bare-faced because of the cosmetic surgery that she has had done in the past. What do you think? Brave or deceiving?

She later posted an Instagram Story video of her make-up artist Ariel Tejada doing "just her hair with no products."

Posting a make-up free photo was also a bold move for Kylie. She's been quite vocal about how inseparable make-up is from her confidence, Vogue writes.

Kylie told Vogue, "When I was insecure about my lips, I turned to make-up to help me feel more confident."

"I used to, like, steal all [my mom's] make-up. She had these two little Chanel loose eye powders...like this baby blue and baby pink, and I’d just put them all over my face."

"They were bomb. My mom always let me be creatively wild and go to my sixth grade class with purple eyeshadow and a cut crease."

Considering how much better make-up makes her feel, you can't help but admire her for finding the courage to post a make-up free pic. We're feeling inspired!