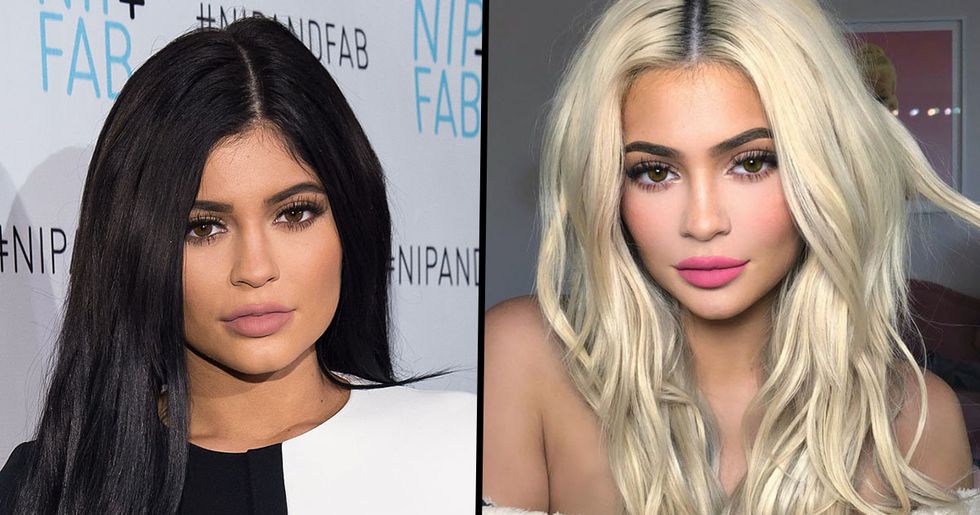 It's no secret that the whole of the internet is aware of Kylie Jenner and her extremely loving relationship with cosmetic surgery. With pictures of her face constantly popping up on every social media platform, it's hard to remember what she looked like before she had work done.

Have you ever thought back to the time before all the surgery? I know, I know, it feels like a lifetime ago, but, recently, the social media star posted a throwback album to Instagram and it contains some shocking photos from the past. Keep scrolling to check them out.

I know what you're thinking: "I thought the slot for Kylie's best friend was open." Since all of the controversies between Kylie and her former best friend, Jordyn Woods, aired, many believed that it would take a while for the position to be filled.

But that doesn't appear to be true.

According to everyone on the internet, Stassie has filled the position and the pictures that Kylie posted recently provide evidence in favor of the claim.

For all of you that don't know, this is Stassie Karanikolaou.

Her full name is Anastasia Karanikolaou and she is best known for her social media presence. And for being one of Kylie's longest standing friends, duh.

Apparently, the two have been friends since childhood.

And, growing up together, they have shared many good times together which they have also shared with us on social media.

A very casual, yet cute shot of the two in the back of a car.

The caption reads: "I can’t even begin to describe how proud and happy I am for you. I love you both so much and I’m excited for this new chapter in life. I can’t wait to spoil her and watch her grow." This is actual best friend goals.

This one was posted to celebrate the best friends' 8 year anniversary.

You're probably wondering why both girls look different here. As you can see, this was taken before the bulk of both the girls' cosmetic surgeries.

And if that shocked you a little, wait until you see the pictures that Kylie posted recently.

They were taken waaaaaaay before surgery was a trendy social concept.

Both girls talk openly on social media about the work that they've had done.

From lip fillers to butt enhancements, you name it, they've probably had it done.

Stassie, in particular, is incredibly open about her treatments.

Over the past few years, she's had many things done, including two breast surgeries, which were both done by celebrity plastic surgeon, Dr. Ashkan Ghavami. She posted this picture to her Instagram saying that she was "excited" about a treatment that she had "been discussing for a while."

And her fans thanked her for it.

@_.nailah._ on Instagram commented on the post, expressing her happiness that the social media star was so open about such personal decisions.

Kylie was more reluctant to admit her enhancements at the start...

The world-famous lip fillers. You know the ones I'm talking about. The ones that ended up taking over the world. Kylie started that trend. Now girls all over the planet are walking around with fluid and other substances injected into their lips to give them that plump look.

Recently, Jenner set the record straight about her lips.

This is what she said to PAPER Magazine for a digital cover story: “People think I fully went under the knife and completely reconstructed my face, which is completely false."

But it is hard to believe with all the rumors surrounding it.

Kylie herself denied getting any kind of work done to her lips at the very start of her cosmetic journey, but, at this point, you would be extremely gullible to believe that it's true considering all the other parts of her body that have gone under the knife.

And, for some of them, it didn't work out as well as it did for Kylie.

And we can't possibly forget about the #KylieJennerLipChallenge.

In 2015, this trend took over the internet. People tried to achieve the "Kylie look" with very unfortunate consequences.

Take a look at some of the worst fails.

I wouldn't advise you try this at home... unless you want to spend a couple of hours in A&E.

Anyway, now that we've established that Stassie and Kylie have been through a lot of surgeries during their friendship...

Let's move onto how Kylie celebrated her best friend's birthday. We all want someone to fuss over us when our special day comes round, and that's exactly what Kylie did for Stassie.

But it didn't work out quite as she had hoped.

People on Twitter were going absolutely ballistic over her Handmaid’s Tale-themed birthday party.

And for those of you that aren't up-to-date, this is why...

The underlying theme of The Handmaid’s Tale is female enslavement and abuse. You can see in the picture above that Kylie is sporting a red dress and white bonnet. This outfit is featured in the show and is worn by people who campaign for Women's Rights all around the world in order to prove a point. It's not just a "sexy" costume for a glitzy party.

In a society wherein women are still having to fight for equality, we have people like Kylie who glamorize serious issues and reduce them down to a one-night event and it's not okay.

After seeing details of the party, which was attended by the likes of Sofia Richie, this is what Twitter had to say.

@spacenefertiti was absolutely appalled at Jenner's choice of theme, exclaiming "WTF #KylieJenner??" That was similar to our reaction, too.

This user decided to put a more light-hearted spin on calling Kylie out.

Sarah (@sarahs89reads) threw her opinion out there saying: "Erm, I’d say that female enslavement is a no, personally." Hm, personally, I agree.

This person on Twitter summed the whole mess up pretty well.

These pictures that she posted for Stassie's birthday were also pretty shocking.

Even though we've already established that Kylie and her best friend have had lots of work done to their faces as well as their bodies, these old pics reveal just how much of a difference they've actually made.

This pre-surgery shot is cute, but if you compare it to a more recent pic, you'll notice that the difference is pretty drastic!

Personally, I think that they look like completely different people now.

Here are some recent shots of the two.

Can you recognize them from the old pics? Because I'm having a pretty hard time.

The two best friends in matching outfits having a good ol' game of golf.

I mean, on one hand, you can commend them for being so open about their cosmetic history, but, on the other, there's the issue of the unattainable beauty standards set by society... well, in this case, set by the Kardashian-Jenner family. We're not all billionaires, you know...