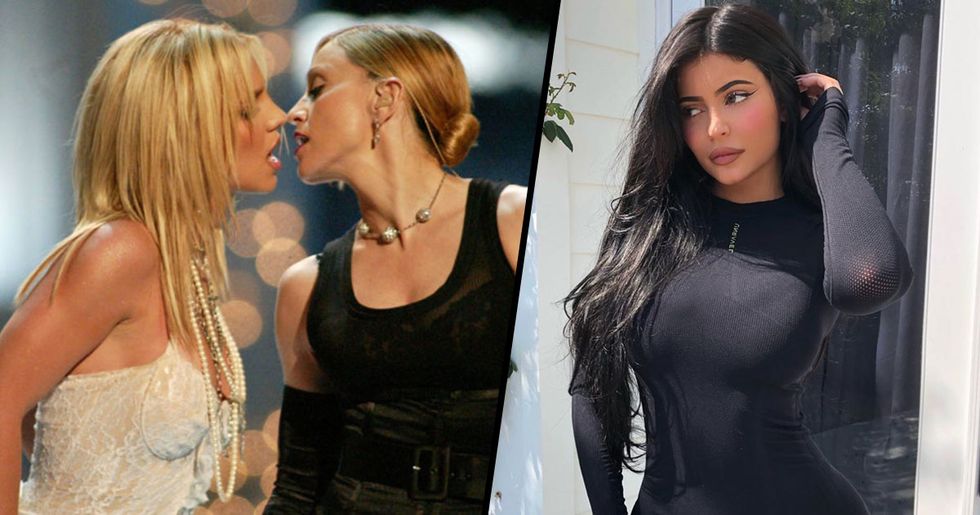 Over the weekend, a whole host of A-listers took to social media to showcase their Halloween ensembles, and it's safe to say many of our favorite stars have been well and truly going for it this year. There really has been a spectacular range of costumes so far. Demi Lovato dressed us as Marie Antoinette, Nina Dobrev portrayed teen megastar, Billie Eilish, and Elizabeth Hurley showcased a fabulous rendition of Uma Thurman in Kill Bill.

But the cream of the crop came from Miss Kylie Jenner. The star is renowned for really going all-out for the spooky festivities and this year was certainly no exception.

For what we anticipate as her first look of many, the star, along with her best friend, recreated the iconic Britney Spears and Madonna's kiss at the 2003 VMAs and it has truly stolen the show.

Keep scrolling to take a look at the clip for yourself (yes, they do kiss).

Earlier this year, the star was crowned by Forbes as the youngest “self-made" (debatable) billionaire. Her staggering net-worth has also made her the wealthiest of the entire Kardashian-Jenner clan.

But there's another area where her talents seem to lie.

... the fine art of Halloween costumes.

The star well and truly steals the show each year.

Last year, the beauty mogul dressed up as Barbie and the internet went crazy for it. We honestly had to double-take to check if that wasn't an actual Kylie Barbie doll.

In fact, Kylie comes from a long line of siblings who continuously smash Halloween out of the park.

Or what about this family look?

The cuteness is too much.

But if this year is anything to go by, it's clear that Kylie reigns supreme.

The star is only warming up with what we can only assume is her first ensemble of many, and she's already wowing fans.

Kylie debuted her first costume over the weekend.

Kylie, along with her best pal, Stassie Karanikolaou, dressed as Madonna and Britney Spears at the 2003 VMAs.

But, if you can't remember, let us refresh your memory...

It was the year the Queen of Pop famously kissed both Britney and, Christina Aguilera...

As you can imagine, the iconic performance garnered significant attention.

And it has definitely gone down in history...

It looks like Jenner wanted to re-create the jaw-dropping on-stage moment with her BFF.

We aren't entirely surprised she opted to pay homage to '00s pop culture.

After all, it appears to be the stars favorite vibe for her Halloween. Take her 2016 Christina Aguilera look, for example.

Jenner went all out for the costume.

The star took to Instagram over the weekend to show off the look, and she truly knocked it out of the park, we have to admit.

She documented the entire process of the look on her Instagram story.

Jenner dressed as Madonna, completing her look with a mic, top hat, and blonde wig.

And her BFF dressed as Britney.

The pair then filmed a tribute video dancing around to Madonna's iconic song "Like A Virgin."

But of course, everyone was wondering if the pair would go as far as to re-create the kiss.

And it seems in true Jenner fashion, the star didn't disappoint. The pals shared a kiss to complete the video.

As you'd imagine, Jenner has got the internet talking with her head-turning Halloween ensemble (okay, mainly the kissing part).

The clip, originally posted to Jenner's Instagram story, has already been screengrabbed and reposted everywhere...

Others praised Jenner for her costume, noting how much she looked like the Queen of Pop.

We can't wait to see what other Halloween looks the star has up her sleeve.