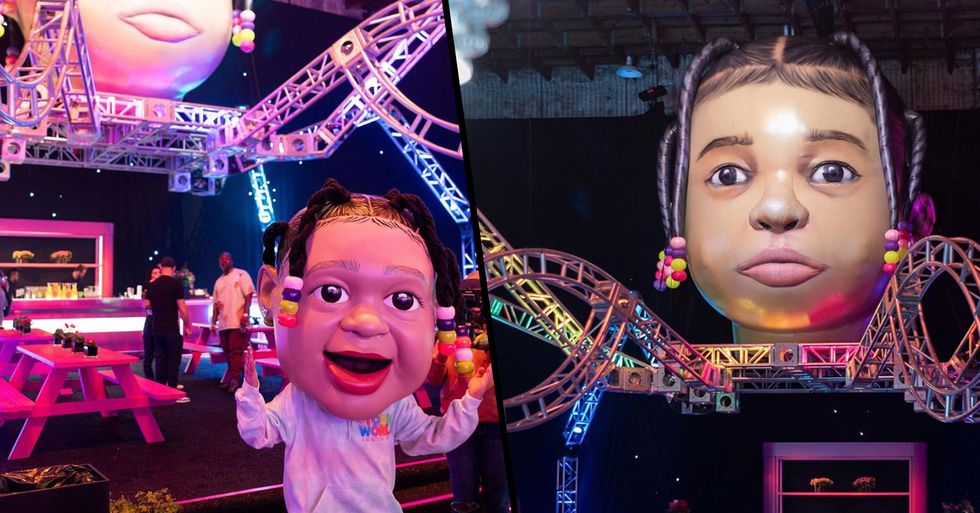 Kylie Jenner is one of the youngest billionaires on the planet right now, and she sure likes to show this off.

Whether that's flaunting her million-dollar cars or her lavish wardrobe, Kylie takes a lot of pride in her extravagant lifestyle.

But she has been slammed over the weekend for the OTT party she threw for her daughter's 2nd birthday.

Kylie Jenner is probably one of the most famous twenty-two-year-olds in the world...

Last year, the star was crowned by Forbes as the youngest "self-made" (debatable) billionaire. Her staggering net-worth has also made her the wealthiest of the entire Kardashian-Jenner clan.

So when rapper, Travis Scott, came into the picture, their romance was no exception...

Kylie had recently separated from (other) rapper Tyger, so their romance was certainly a whirlwind.

According to TMZ, after a month, the pair became exclusive.

They were spotted during various outings together, but, most prominently, things got serious when Kylie was seen traveling to Houston to meet Travis’s family, followed by watching a Rockets game together before apparently attending an after-party that evening.

And nearly 2 years into their relationship...

In February of 2018, Kylie gave birth to the couple’s first child, a daughter named Stormi Webster.

The pair called it quits for good in October 2019.

The news came after Scott was notably absent when Kylie attended Justin and Hailey Bieber's wedding with Stormi, but without her beau.

Apparently their split was a simple case of wanting different things...

"There were several issues that made them decide to take a break," a source close to Kylie told People at the time. "Kylie is all about family life and really wants a second baby. She still has trust issues with Travis. He hasn't been giving her the commitment that she needs. Travis isn't ready to give her all that she wants."

But the famous pair continue to co-parent their daughter together...

Stormi remains, and always will be, their number one priority.

And speaking of Stormi...

The already famous toddler celebrated her 2nd birthday over the weekend.

And in typical Kardashian/Jenner fashion...

Well, it was more like a festival rather than a party...

In similarity to her first birthday party last year, the theme was Stormi World, but this time the tagline was "2 is better than 1."

There were different areas of the party...

Including an enchanted forest, a Trolls world, and a Frozen world... all of which were navigated by theme park-style maps handed out at the entrance (that's how big the whole thing was).

The party was kitted out with a lavish birthday cake, rollercoasters, an enormous ball pool, and actors dressed up as Stormi's favorite Disney characters.

But things started to get a little bit weird...

The 2-year-old had her own merchandise line especially for the party.

It all started to seem extremely excessive for a 2-year-old who will more than likely not remember the party.

And since when did toddlers listen to rap music?!

Rap music can be heard blasting out from the Instagram stories, and the whole thing has started to feel like self-promotion of Stormi's famous parents.

We understand the need to spoil our children on special occasions...

But many have found Kylie's party "nightmarish" and way too OTT.

People have been sharing their opinions online...

Kylie Jenner decided to gift her daughter with the most nightmarish second birthday party I’ve ever seen. https://t.co/KRwX6jsrDn
— mitch (@mitch)1580644020.0

And many seem to be thinking the exact same thing about the whole commotion.

People seem to forget that Kylie is a billionaire...

But that isn't an excuse to build an entire theme park for your toddler's birthday.

One can only imagine how spoilt this child will grow up to be...

This Twitter user described the party as "gruesomely excessive consumption and waste, unnecessary environmental damage, and a total disregard for messages sent to the future generation."

Many brought up the fact that Kylie was peer pressured into eventually donating to the Australian bushfire crisis...

lmfao imagine if Kylie Jenner had a low key party for stormi and instead gave that money to Australia
— Morgan Katz (@Morgan Katz)1580607966.0

And it's more than likely that Stormi's party cost more than what Kylie donated.

At the end of the day, it seems that Stormi had a wonderful time...

But let's be real for a minute - this will be a long-forgotten memory in a few years time and who knows how Stormi will grow up when she has been so spoilt already in her short life.