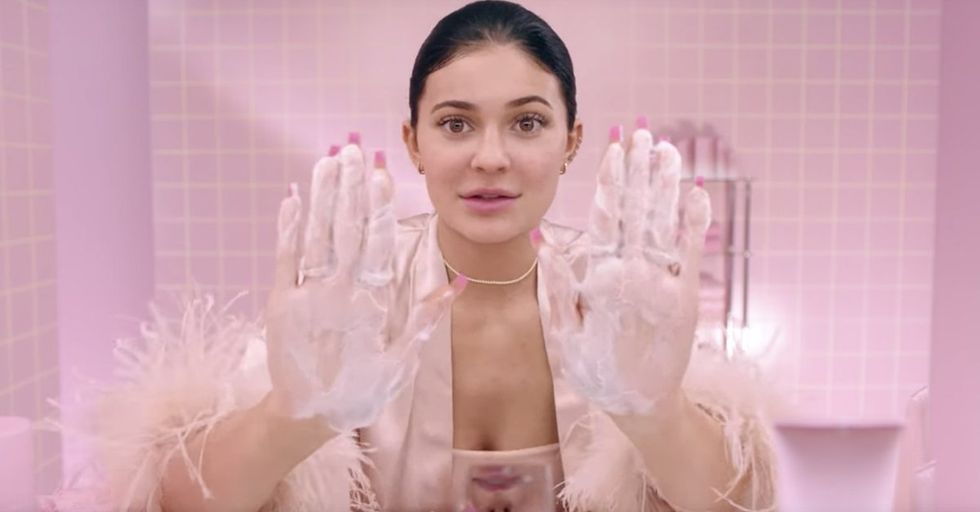 Kylie Jenner, the youngest of the Kardashian-Jenner sisters, has set a launch date for her new skincare line Kylie Skin. To accompany the announcement, Kylie released a YouTube video and a series of product-specific promotions, each showcasing her "no makeup, no filter" skin. Although, that surely doesn't include "no photoshop."

The product descriptions were met immediately with criticisms, from everything to the packaging (too similar to Glossier) to the false claims (Jenner still denies her plastic surgery and fillers) to, most importantly, the ingredients themselves.

Keep reading to Keep Up with the most recent Jenner developments!

Kylie Jenner, little sister of Kim Kardashian, is a titan.

She's one of the youngest billionaires of all time, she's one of the most followed people on Instagram, and her success shows no signs of slowing down.

She's also famous for the most insane glow up of a generation.

I mean, maybe money can't buy you class but it can absolutely buy you a brand-new face, and body to match.

In 2015, she started a company with her mom called KYLIE COSMETICS.

At the time, Kylie was famous for her lips. So, the first products she came out with were lip kits which included a lip liner and a matte lipstick. They sold out instantaneously, even though their exact dupes were a sixth of the price.

She expanded into other products: eyeshadow pallets, brow kits, and Kollabs with her sisters. Kim jokes on their show that she used to be Kris' favorite but now Kylie is. Tough family.

Her products even play a role in family drama.

After Khloe found out that maybe Jordyn Woods (Kylie's longtime BFF) and Tristan Thompson (Khloe's erstwhile husband) had hooked up, Kylie discontinued her Jordyn line. The shade of it all. But, in simpler times, Kylie and Jordyn did wonderful Britney and Justin cosplay. For those taking notes, these would have been amazing outfits for the camp Met Gala.

So, when Kylie announced she was getting into skin, there was a lot of excitement.

With the success of Kylie Cosmetics, her constant social media updates, and high profile relationship, Kylie has a passionate fan base. Skincare is the new makeup, so her entree into the scene is a big deal and exciting for her devotees.

Before the products were officially out, Jenner's fans planned on buy all of it.

Maybe slow your roll before you blow all of your money on an untested skincare line. Some aspects of the Kylie Jenner fandom feels more like Pokemon "gotta catch 'em all" than a genuine interest in the products.

Some people were excited for different reasons.

Kendall Jenner's Proactiv video is really something but nothing compares to P Diddy promoting the same product. It moisturized his situation.

Kylie showed off all of her products on her YouTube channel.

The video has 1.8 million views and it's essentially an infomercial. that's the power of Kardashian branding. Then, each product got its own post on the Kylie Skin Instagram, which already has 1.2 million followers. Bonus, the video has a few moments of accidental ASMR.

As with most things Kardashian, there was a lot of criticism.

The product that brought the most criticism is the walnut scrub. Everyone from skincare obsessives to aestheticians chimed in.

People are not here for the walnut scrub.

TLC's song is timeless, for so many reasons. Under the walnut scrub announcement, the internet flooded the comments with jokes, digs, and warnings.

Even in Kylie's own promotional video, she mentions her dry skin.

Yes, if you manually scrub your skin that much a week, it's going to dry the eff out. No one wants to look like zombie Taylor Swift. No one.

Walnut scrubs have been accused of creating "microtears" at the worst, but even at their best, they're very drying. The gentler version of physical scrubs, microbeads, pollute the oceans. So, scrubs are a lose-lose.

The biggest scam of all is that there's no way Kylie Jenner uses a walnut face scrub.

The Kardashians have access to the best dermatologists and estheticians in the world. On call. To their houses. At any time of the day. That's why they glow in HD. Not because they're using the thing my mom used on her elbows in the 90s.

The OG walnut scrub, St. Ives, has been the subject of internet memes for years.

It's cheap and everywhere. Until the internet opened up the world of collective knowledge at everyone's fingerprints, all the normies had was the beauty aisle at Rite Aid. But then we all learned the truth: no face needs this kind of extreme exfoliation ever.

There are subreddits dedicated to bashing St. Ives.

This skincare subreddit works hard to educate people about their skin and dispel common myths. A common myth: aggressive exfoliation will scrub away everything you hate about your skin. It won't. There's a debate over the microtear assertion but bottom line, "pain is gain" is not the truth for your skin. Also, WEAR SUNSCREEN.

So, Kylie's announcement of a St. Ives-style scrub seems particularly out of touch.

It's a moment of "your privilege is showing." Kylie Jenner doesn't have to research her own skincare or shop at Target. Maybe if she'd spent one second looking up "exfoliation" she would learn that it's all about those AHAs and BHAs, baby.

@kylieskin do NOT pay this billionaire your hard earned money so you can tear up your precious faces with tiny bits of walnut. DO NOT
— Beth McColl (@Beth McColl)1557856004.0

Because the Kardashian tribe have announced themselves as queens of all things beauty (even though Khloe's self-tanner is always uneven, you can't unsee it), their followers would trust them with something like a skincare line. Why would you think they would make absurdly bad products?

Even the marketing betrays the lack of thought behind the products.

People can google things now. You can look up studies on parabens and sulfates. You can see a list of ingredients allowed in Europe and Asia vs the ones allowed here. The product line assumes the customers will blindly follow Jenner into the land of aggressively drying products without questions.

There are just so many issues with these products.

Not only are make-up wipes polluting, but it's also not good to wipe your face often with a cloth. Again, Kylie, stop scrubbing your skin off. That's why it's dry. Jeez.

The most obvious offense is the theft of the Glossier aesthetic.

Glossier is a skincare and makeup brand started by Into The Gloss founder Emily Weiss. The packaging, all millennial pink and sans-serif font, is shockingly similar. However, where Glossier prides itself on being skincare for smart people, Kylie's products are steeped in 90s ridiculousness.

In the past few years, there's been a movement towards a more natural look.

Makeup Artist Katie Jane Hughes has become famous because of how she edits, or doesn't edit, her photos.

Unlike any Kardashian Instagram, Katie shows her skin. She has pores, she has fine lines, she has peach fuzz. And that's a good thing! Coincidentally, she uses many Glossier products.

Kylie knows that to stay relevant, she needs to lower the wattage on her makeup and pivot to skin.

Kim once said that her mom told her never to promote something until it was perfect. Kylie should have done a little more research, waited a little longer before making this jump to skin. Skincare junkies don't mess around.

There's a theory that Kylie jumped to market to take out Rihanna.

Kylie’s my girl but I think she lowkey rushed to get this skin care line out before Rihanna dropped her Fenty Skin… https://t.co/L721bvQzCn
— indy is listening (@indy is listening)1557524232.0

Whether or not that was the reasoning, it most likely will not be effective. When Rihanna does something, she does it the best of anyone.

As Shakespeare once said, it's a fool's errand to compete with Rihanna.

She's a top-selling recording artist, a fashion designer, and a cosmetics giant in her own right. She walked away from both Drake and Leo (allegedly) and into the arms of a billionaire. We stan a legend.

Not even Norman Bates could take her down.

Rihanna played Marion Crane in Bates Motel. Except in Rihanna's version, Marion lived. If you can survive the most notorious serial killer of all time, even Kris Jenner is child's play.

There are rumors that Kylie wants to start a hair care line.

Considering she mostly wears wigs and hair extensions, it seems like a weird direction for her. Why not lean into who you are and come out with a line of hairpieces and press on nails?

I wonder if she knows all of the stuff you're not supposed to do to your hair.

Maybe she should have her assistant do a quick read on Reddit and Instagram just to have an idea or else she's going to come out with a hair set full of SLS and silicone.

Kylie's skincare line comes out in a few days.

Maybe Kylie Jenner will surprise us. Perhaps she's come out with something that magically arches your eyebrows, plumps your lips, and shaves down your jaw! I, for one, will not hold my breath. Or scrub my face.