Ladies, If He Doesn't Laugh at This Meme, He's Not Your Man | 22 Words 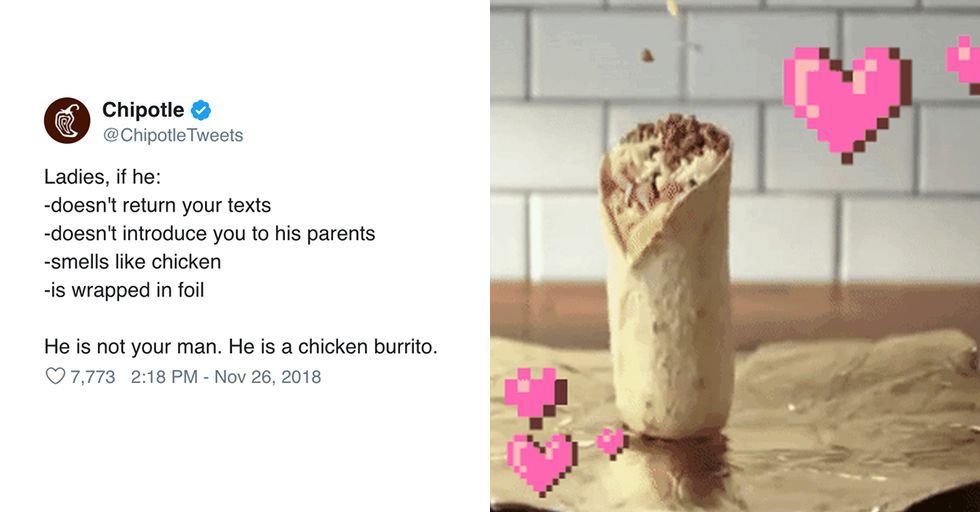 Ladies, If He Doesn't Laugh at This Meme, He's Not Your Man

I hope you've seen this hilarious meme that's taken the Twitter world by storm. It's called the "ladies if he" meme, and it is everywhere right now. The joke is so popular, your parents have probably tweeted their own version– or made a Facebook status about it. Your grandparents have probably even gotten in on it too, including one in the next group email they send to your family.

But if you live under a rock, know that the "ladies if he" meme has been circulating the internet like crazy. The set up of the meme came from serious tweets about how men should treat their partners. But of course, like everything on the internet, people on Twitter got ahold of it and went crazy.

It goes like this: it starts with "Ladies if your man" and then lists a series of things "your man" might do. Then the punchline explains who the person in question is. Don't understand? Well, try reading some of the funniest versions of the meme we could find.

Let's get the ball rolling.

Are you getting the hang of the joke, yet?

Just to be sure your man isn't actually Gaston– maybe watch the movie a few times.

Any man could be Gaston in disguise, so you can never be too careful.

Brands were getting in on it, too.

And okay, maybe that could have ruined it, but some of them were pretty funny.

And mostly we wanted you to look at this gif of delicious pizza.

This one is my personal favorite.

You'll love it if you are a Parks and Rec fan.

If you don't know who Ben Wyatt is, please go watch it.

And then eat a calzone for me.

If he's a single mom who works too hard...

She did dress up as a man for KFC. Which is suspicious. Did anyone else watch Reba's sitcom when they were growing up?

Could Reba be your man?

We can't be too sure.

There were music ones, too.

This one works really well. Shoutout to all the Mr. Brightside fans!

Really any song that contains a list is perfect for it.

The meme is still going strong.

You know someone got GGBO in there.

I think it might even get a Hollywood handshake.

The Thesaurus even had a go.

Of course, there were lots of Office references.

Ladies, if he -asks you specifically not to cheat on him -loves Burlington coat factory -used the dating profile u… https://t.co/lFOUYI1Byw
— Michael Gary Scott (@Michael Gary Scott)1543179069.0

This one was the best, though.

Who else would create a fun run to cure rabies?

Literally nobody else, only Michael Scott.

Be careful, your man might be this famous ogre.

Yup, it's Shrek from the movie, Shrek.

Beneath his layers, he is not your man.

Unless you are Princess Fiona.

This one needs a photo.

We demand to see the pug.

Gritty made many appearances in this meme.

But appearing out of nowhere seems to be Gritty's style.

That and breaking things.

We love you, Gritty.

The Monterey Bay Aquarium used the meme to teach us something!

Sneaky and educational. We should introduce them to Thesaurus.com.

As is this great GIF.

Chipotle had to chime in.

Ladies, if he: -doesn't return your texts -doesn't introduce you to his parents -smells like chicken -is wrapped in… https://t.co/WuqiOgpvGn
— Chipotle (@Chipotle)1543270690.0

I'd rather have a burrito than a man.

If only Lin Manuel Miranda was my man.

Obviously, many people agree with that sentiment.

We also love you, Lin.

People used the meme to roast their local public transportation.

Harsh but it's true.

This one takes a little bit of thought.

And honestly, some light Googling. But once you get there, it's perfect.

Excellent use of lyrics.

The one person who may disguise himself to be your man.

He has a lot of different looks.