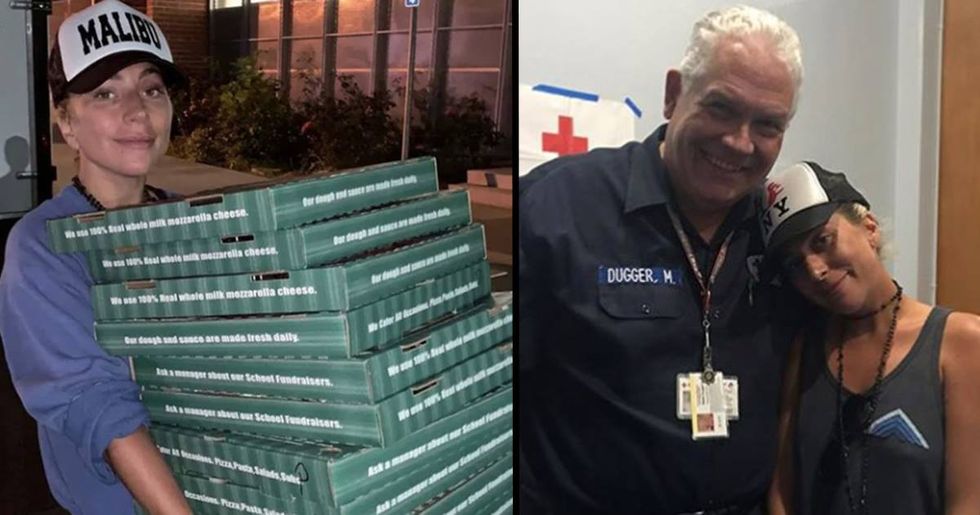 The singer, and recently turned actress, surprised those affected by the California wildfires with pizza and coffee - and even took to the stage to sing to a 98-year-old woman who had been forced from her home at the Red Cross Evacuation Centre.

Yes, this woman really does have a diamond heart.

Gaga herself was evacuated from her Malibu home on Friday 9th November due to the Woosley Fire, which has currently destroyed more than 96,000 acres of land and forced more than 265,000 people to evacuate their homes.

Gaga tweeted: "Thank you to the firefighters, police, first and emergency responders for doing above and beyond everything you can do to help us. You are true heroes."

Delivering pizza on World Kindness Day? Yaas. Gaga encouraged her fans on Instagram to do one act of kindness - "even if it's for yourself," she said.

Volunteers and evacuees at Red Cross Shelter at Pacific Palisades High School in Los Angeles: teaching the world how to be a little more compassionate.

The singer reportedly spent around 90 minutes at the shelter, and during that time, gave a small performance to a 98-year-old woman who had been evacuated from her house.

Seriously, when is she going to run for President?

We'd love to see her in the Whitehouse, right? Speaking of, she called out Trump for his absence during the fire, tweeting: "Mr. President show some compassion for the people of California and set an example of kindness for this country."