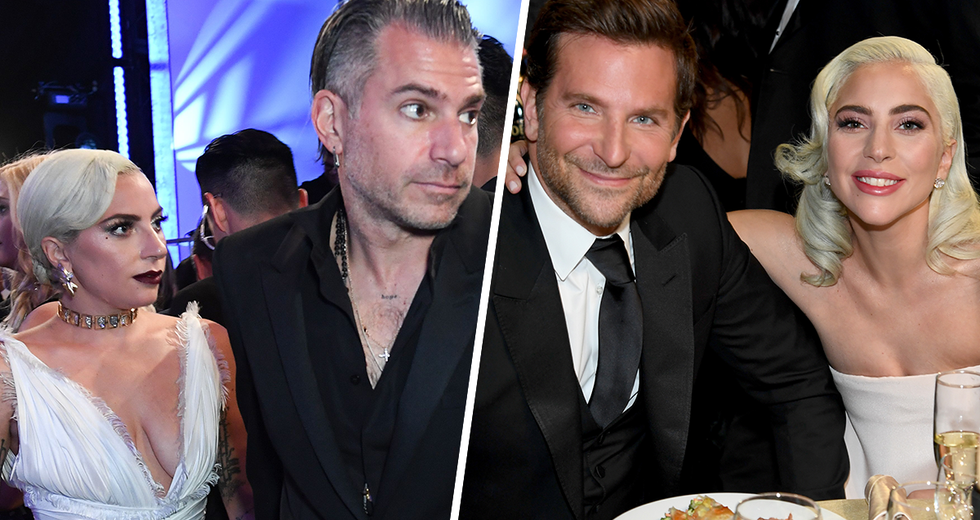 Lady Gaga and her fiancé Christian Carino have officially split, just a week after Gaga sparked rumors of a break up during the Grammys by not wearing her engagement ring. Stars often swap out personal jewelry for designer bling on the red carpet, but this was just another tally in a collection of things pointing towards Splitsville for Gaga and Carino.

Not only did she not wear her ring, but she also failed to thank Carino in her Grammy acceptance speech. Fans knew this meant there was trouble in paradise because Gaga is an absolute mush over the men in her life when she's in love. She's all about showing her feelings so the absence of her ring and lack of a mention in her speech meant something was amiss. And it turns out the fans were right.

Now, the question on everybody's lips is... what does this mean for Gaga and her co-star, Bradley Cooper?

Gaga officially announced her engagement to Carino in October of 2018 during her speech at Elle's 25th Annual Women in Hollywood event.

During the speech, she name-checked Carino, calling him “my fiancé Christian." Carino, 49, is a talent agent at CAA. He is part of the team that represents Gaga, which is how they met. According to E! News, "The ring is a gorgeous round pink diamond surrounded by smaller jewels." E! also reported that Andrew Brown, President of WP Diamonds, claimed the ring was insanely expensive. He told the outlet, "Lady Gaga's spectacular ring appears to be a 6-7 carat pink sapphire with a diamond halo totaling 3-4 carats. This is likely a high quality, no heat (treatment), pink sapphire... It looks like it may be a Padparadscha sapphire, in which case this ring would easily retail between $300,000 and $400,000." Well, damn. Get it, girl.

But if you look at the signs, there has been trouble brewing in Gaga's relationship for quite some time.

Instead of posting a photo of her fiancé on Valentine's Day, Gaga posted a photo of her new tattoo, inspired by A Star Is Born. The massive piece goes all the way down her spine. The tattoo is of a rose. Many have speculated that the design is a reference to the moment in which Ally, Lady Gaga's character in A Star is Born sings "La Vie en Rose," a song by French songbird, Edith Piaf, to Bradly Cooper's character Jack. If that is indeed what the tattoo is for, it's pretty darn romantic. Don't you think?

It was a whirlwind romance.

According to People Magazine, a source said that after ending her engagement to actor Taylor Kinney, “she wasn’t expecting to find love with Christian so quickly but things just became serious very fast. Christian is a good, grounding force and understands her career." Unfortunately, the relationship couldn't withstand the whirlwind of fame, press, and paparazzi that seem to follow Gaga wherever she goes.

It's often tough to find a man who is willing to play second fiddle to a powerful, famous woman.

In order to be a good partner to a woman as well-known and revered as Lady Gaga, you'd have to be fine with standing back and letting her shine. We have no idea what actually happened behind closed doors, but it can't be easy for anyone to have to take a backseat to their partner, especially a man like Carino who is used to being a powerful wheeler and dealer in Hollywood.

So what does this mean for Lady Gaga and Bradley Cooper?

After watching their insane chemistry onscreen in A Star is Born followed by the parade of red carpets they walked hand-in-hand, everyone and their mother had the same question... Could these two be the real deal?

Gaga even seems to be playing into it with her Instagram posts.

She clearly feels strongly about Cooper, her co-star, and the film's director, but is it love? Or is it just intense friendship that bonded them for life?

Cooper, 44, is married to Irina Shayk, a 33-year-old Russian supermodel who has modeled for Victoria's Secret and Sport's Illustrated. They have a baby daughter named Lea. So it's not like he's on the market, exactly...

But it doesn't stop fans from speculating and hoping.

And the timing of the break up is pretty specific, too, considering the news is coming just days before Cooper and Gaga are predicted to take home a veritable armful of Academy Awards for A Star is Born. Will we catch them canoodling on the Oscars red carpet? Or will Cooper walk with his wife? Tune into our Oscars coverage Sunday to find out.