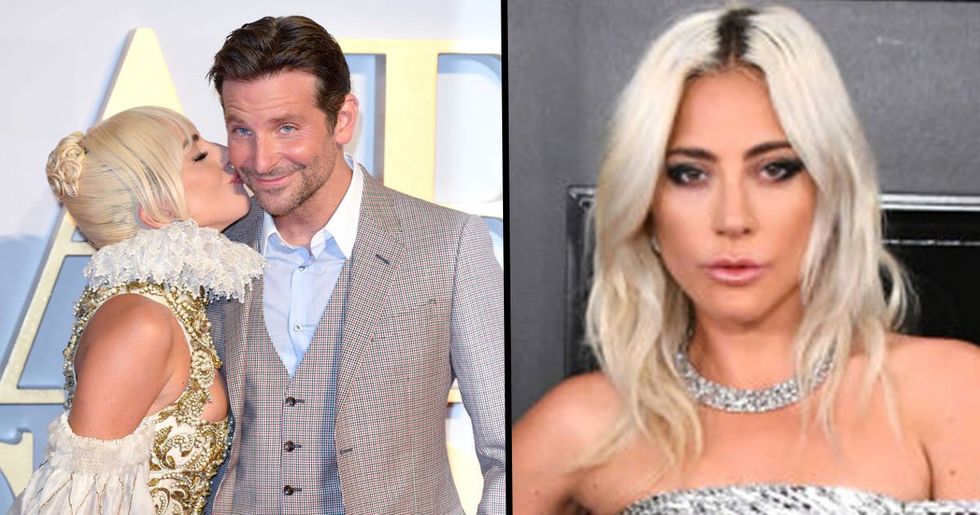 It's been months since the release of A Star Is Born, but people still can't let go of the supposedly "real" Lady Gaga and Bradley Cooper romance.

At the time Gaga said that rumor is completely false, yet, with so much "evidence" out there - performance at the Oscars, broken off engagement - people aren't convinced. Even other celebrities are doubtful.

Cooper's girlfriend is also upset about the "close" relationship between Bradley and Gaga.

Now a new story swept over the tabloids. Lady Gaga is pregnant! She responded to the new rumors and confirmed some huge news.

Over the past 3 years, she has performed a world tour and filmed a movie with Bradley Cooper.

A Star Is Born gave her an Oscar, a new world record, and a rumor that can't seem to go away.

Every time Gaga and Cooper perform "Shallow" on stage, fans and tabloids find new "evidence" that their love is real.

Even other celebrities believed the rumors were true.

Blunt and skeptical Piers Morgan was one of them, says Evening Standard.

Mel B of Spice Girls said she felt uncomfortable for Irina Shayk, Bradley Cooper's girlfriend, after his and Gaga's Oscars performance.

Especially since the couple has a daughter together.

It also didn't help that Gaga broke off her engagement to fiance Christian Carino not long before the Oscars.

A source close to Shayk told The Sun that she's really sick of the rumors.

The source also said they're relationship became "incredibly tense" because of these stories.

"The stories about Irina being sick of Gaga have some truth to them," the source admitted.

"It’s not that she dislikes Gaga or is jealous of her, but she’s sick of the constant stories about her ‘close’ relationship to Bradley."

"She’s no stranger to cheating rumours – she dated Cristiano Ronaldo after all."

"But it’s been a long publicity campaign and she’s ready for it to end," they added.

"She’s actually thrilled at how successful the movie has been and really wanted to go to the Oscars," the source continued.

"It’s undeniable that Gaga and Bradley have chemistry – they have a lot more in common than Irina and Bradley – but that’s why the movie worked."

Gaga has told Jimmy Kimmel Live! that the two were simply acting.

"Yeah... that's what we wanted you to see," she said, referring to their very convincing chemistry, and adding that social media is "the toilet of the internet."

In fact, Gaga said, it was Cooper who directed the Oscars performance.

It was he who wanted every little detail to be perfect and to create the right mood, including the lighting.

"From a performance perspective, it was so important to both of us that we were connected the entire time," Gaga explained.

She then gave the example of her friendship with Tony Benett, which had also previously sparked romance rumors.

"I've had my arms wrapped around Tony Bennett for the three years touring the world."

"When you’re singing love songs, that’s what you want people to feel," she added.

But her debunking the rumors didn't calm the people down. A new story – that Gaga is pregnant – has recently shown up in the news.

Tabloids are all about the speculations.

According to Cosmopolitan, they're claiming that Gaga was overheard at the Oscars party saying she was expecting a baby but "wouldn't reveal the identity of the dad."

"It makes sense that she would’ve only just found out," a source supposedly told the tabloid.

"Gaga was partying throughout most of awards season, but then she stopped. It didn’t go unnoticed that she avoided booze at the Oscars."

"The first thing everyone will want to know is whose baby this is," the tabloid continued.

"If there’s any question at all, the belief is that Gaga and her most recent lovers will demand a DNA test."

Gaga was having none of it.

She went on Twitter and shut down the rumor, saying she was indeed expecting... her sixth album.

After a long 3 year break, a new Gaga album has been conceived and it's just a matter of months until it's introduced to this world.

Her last album, Joanne, came out in October 2016 and received a lot of praise, says Independent.

"The record took a much more minimalist approach to the previously maximalist pop Gaga was known for, with the emphasis placed on her vocal talent," Roisin O'Connor wrote.

There aren't any other details on the upcoming album.

However, rumor has it some really unexpected collaborations might be in production.

Some fans believe Rihanna might be in one of the new songs.

That's because they have noticed that Gaga has recently followed Rihanna and producer BloodPop on social media.

Fans are super excited about the news.

One fan replied to Gaga's tweet, saying, "GIVE BIRTH NOW!"

Another wrote, "I hope your water breaks."

People got really creative with their replies, making memes that referred to the pregnancy rumor.

One even came up with a pretty wild conspiracy theory.

They tweeted, "What if she’s really pregnant and the kid’s name will be the title of #LG6?" That would be the best plot twist in history.

? was happy to hear about the possible collab: "RIHANNA ON LG6? IN CONCLUSION, WE'VE STANNED EVEN HARDER."

Daniel Newmaη: "Baby I told you were NOT going to call her #LG6! We talked about this 7 times. My family won't allow that. Her name's either Biff or Carol. Your call sweetie."

Gaga Daily: "Can I babysit?"

Marc: "How many months pregnant? We talking third trimester or what?"

We STAN me loving Music wrote, "GET UR WIG GLUE SISTERS," then added, "Get ur Enigmatic Liquid while u can."

Lady Gaga 96: "Is the baby already kicking?" GagaAries: "We need to have a baby shower. Like now."

Ante ??: "If you have a miscarriage, I'm having a miscarriage with my life as well okay, you crossed the line, okay Stefani?? YOU BETTER PUSH."