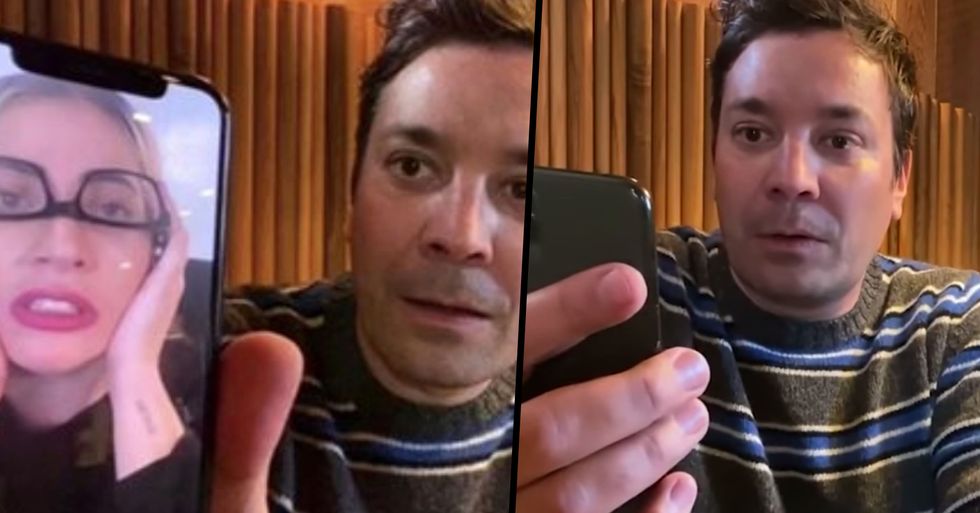 Jimmy Fallon had to deal with some awkward news when he video called Lady Gaga,

The star is clearly struggling to balance her work commitments while in quarantine, which left both Jimmy and Gaga red-faced.

Usually, the star is ready for anything life throws at her, but that didn't seem to be the case when Jimmy caught her off guard.

Live TV has felt the biggest impact when it comes to the quarantine measures currently in place.

And you can't have a live studio audience when people are in self-isolation.

That's where the Tonight Show: Home Edition comes in...

Jimmy Fallon has been recording the show live in the comfort of his home.

The show definitely has a more personal feel now.

And even though it's still on TV, it feels like you're there with him, which gives a nice vibe to the twenty-minute episodes.

Jimmy has been doing the best he can in a bad situation.

Including roping celebrities into his show and hoping for the best.

This is a dangerous game.

And it can get awkward real quick if things don't go to plan.

Unfortunately, it's inevitable, and just a part of show business.

One such incident took place when Jimmy video called Lady Gaga, who was supposed to drop some big news.

Things got awkward when the singer refused to make the announcement.

Instead, she said she "couldn't talk right now," and asked if they could reschedule for the following week.

Naturally, this threw in a curveball.

It was clear that she had completely forgotten she was supposed to be on the show.

Jimmy called Gaga with the intention of asking about her "big announcement."

He then turned his phone around so the audience could see her, letting her know she was on TV.

Things got a little embarrassing for Jimmy.

When he asked her about her big news, Gaga replied: "I can't tell you everything right now because I'm still ironing out the details and I have a lot of phone calls to make." After which she asked: "Can we do it Friday? I promise we can move it Friday." Evidently the singer is struggling to keep on top of work commitments while in quarantine. Take a look at what's happening to these celebrities while they're stuck in quarantine...