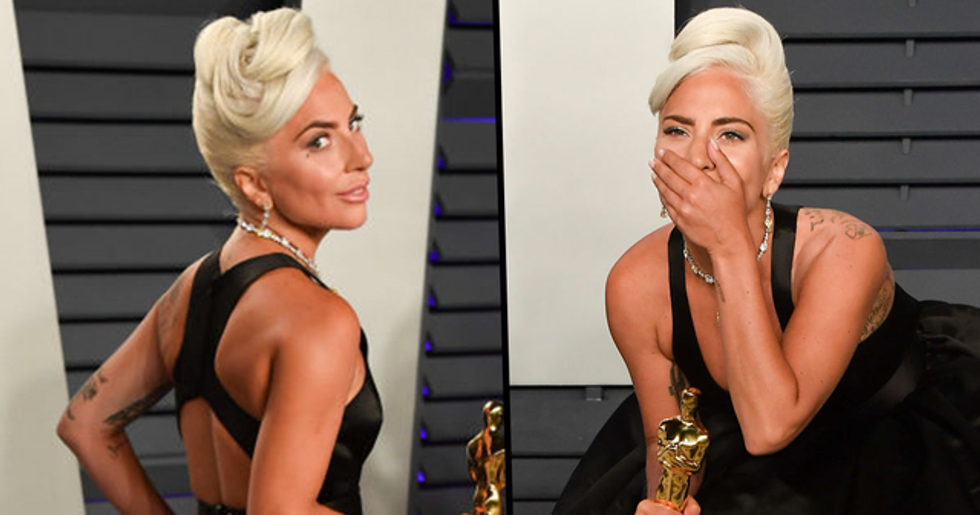 Lady Gaga Wore a $30 Million Tiffany Necklace to The Oscars

If there's one thing you can always count on, it's Lady Gaga turning a look. In the past, her red carpet outfits tended to be designed with shock in mind - for example, her meat ensemble at the 2010 MTV Video Music Awards, or her appearance at the 2011 Grammy Awards inside a giant perspex egg. And although the star has calmed down a little, she's still down to take some fashion risks.

Since starring in huge hit movie A Star Is Born, Gaga has tended more towards a traditional, glamorous vibe, although she'll usually put a fun, Gaga twist on her look. Her appearance at the Academy Awards this week was no exception.

The star opted for a stunning Alexander McQueen gown with fashion-forward hip padding. But on top of this high-fashion ensemble was Gaga's crowning glory. Her necklace, which was worth an eye-watering $30 million, is a Hollywood pedigree, and the internet is absolutely obsessed.

Lady Gaga is known for her extravagant style.

Whether it's a music video, a concert or a public appearance, you can always be sure Gaga will be wearing something that will get everybody talking.

When Gaga first rose to fame, her looks were pretty out-there.

She wore outfits that seemed designed almost solely to shock. Looking nice seemed to be a secondary concern for the star.

Alongside clothing, hair, and makeup, Gaga has another way to spice up her looks.

She often goes for larger, more eye-catching and outlandish jewellery items to customise her looks and take them to the next level.

In the movie, Gaga plays a girl with a less conventionally attractive appearance. For the role, Gaga was required to go makeup-free, and her pared down look surprised many viewers.

Fans have noticed a shift in her aesthetic since the movie.

Although Gaga is certainly more glammed-up than she appeared on screen, it seems her truly outlandish fashions are behind her. In promotional appearance for A Star Is Born, Gaga has looked every inch the Hollywood star.

Though her love for jewelry is still apparent.

In Gaga's most recent appearances, she's opted for a range of stunning statement necklaces. At the Los Angeles premiere of A Star Is Born, she was dripping in sparkling jewels.

This week, Gaga appeared at the Academy Awards.

A Star Is Born has had an amazing awards season, which culminated last night in a win for Gaga in the Best Original Song category.

Gaga performed the song at the ceremony.

The performance has been hugely acclaimed and viewed as one of the highlights of the night. It ended up getting not one, but two standing ovations.

Many thought the electricity of the performance was a sign of romantic feelings between the two - but either way, both Cooper and Gaga sang their hearts out.

The pair were visibly emotional at the response.

All in all, it was a great night for Lady Gaga - in spite of the fact the movie ended up losing out in the majority of award categories it was nominated for.

The look was quite understated for the usually over-the-top star, and consisted of a fairly simple black gown and long gloves.

Although the look did have a hint of Gaga flair.

The dress was an Alexander McQueen design, which are often known for adding a twist to a classic. In this case, the dress had some structural hip-padding which took the whole look up a notch.

As with any Oscar star, Gaga had an outfit change.

At the Vanity Fair after party, she changed out of her sleeker gown and into something bigger and more party-appropriate.

Gaga also removed her gloves as she posed with her Oscar.

But she kept her hair up in a chic and sleek chignon, and stuck to a black, satin aesthetic that will never go out of style.

There was another key element to Gaga's look.

It was a truly amazing statement necklace, made up with tons of sparkling diamonds and an unusual large yellow-tinged stone.

The necklace got a lot of attention.

Not least because of the stone's Hollywood pedigree. The large yellow diamond was last seen on true Hollywood legend, Audrey Hepburn.

There's another jaw-dropping aspect to the jewel.

Lady Gaga runs the #Oscars⁠ ⁠red carpet in a black gown. She's wearing a Tiffany yellow diamond necklace, one of th… https://t.co/imsU6eaiDb
— The Harbinger (@The Harbinger)1551055573.0

And that's its price tag. While there have been some conflicting figures reported online, it appears the stone with worth somewhere in the vicinity of $30 million. Holy moly.

The stone is the kind of diamond which has its own name.

It's called the Tiffany Yellow Diamond, and is a 128.54 carat stone. Tiffany's has reportedly owned the diamond for 141 years, but it hasn't been seen by the public since 1961.

The look has changed a little.

While Hepburn wore the stone in a more classical necklace style (somewhat resembling a tiara), Gaga's necklace had a more modern appearance.

Hepburn wore the stone in promotional shoots for her most famous role.

The necklace appeared in a variety of promotional materials for Breakfast At Tiffany's - which makes sense, given the diamond's name.

So the diamond is connected to one of the most iconic films of all time.

Although it wasn't actually a part of Breakfast At Tiffany's, the diamond is intrinsically linked to both Hepburn and to the film.

Gaga has an established connection to Tiffany's.

In 2017, she was announced as a brand ambassador, and released a collaborative collection of jewelry with the legendary store.

The diamond was modeled into Gaga's necklace in 2012.

The new design for the stone was a celebration of the 175th anniversary of Tiffany's. The Tiffany Yellow Diamond is one of the largest yellow diamonds ever discovered.

The stone has had a few iterations.

Here it exists as a part of a brooch in 2006. The diamond is cut with eighty two facets, which is twenty four more than traditional diamond cuts. This is to give it the maximum in terms of shine.

The internet was obsessed.

Wearing a jewel with so much history and legacy was a fantastic move by Gaga. It absolutely elevated her classic look, and showed her to be one of the biggest stars of the moment.

Some were openly jealous.

It isn't just the rarity or value of the diamond that makes it so enviable, though. It's the fact that the stone is such a part of history - and Gaga has cleverly linked her own story to the stone's.

There were also some great jokes on the topic.

Many drew comparison's between Gaga's necklace and the 2018 movie Ocean's 8, in which a group of women go undercover to steal some rare jewels.

Others noticed this similarity.

It's true, Gaga's necklace does bear a striking resemblance to the piece from How to Lose a Guy in 10 Days - which we doubt was intentional.

The diamond is now part of a super-sparkly necklace.

While the Tiffany Yellow Diamond is undoubtedly the centerpiece, it's worth noting that the stone is surrounded by other, smaller diamonds - each of which could be the star of the show in any other necklace.