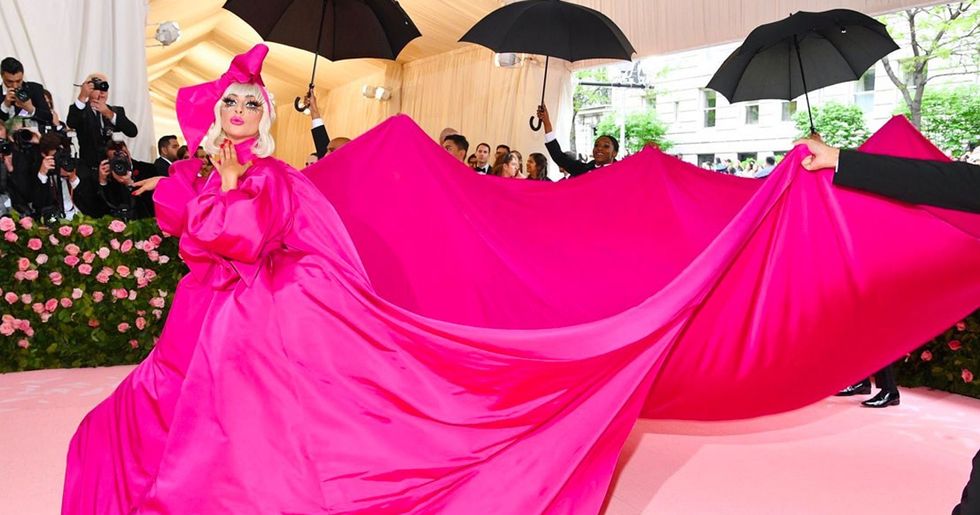 For fashion lovers everywhere, it's the most wonderful night of the year: the annual Met Gala. It's a night of complete glamour: celebrities walking the red carpet in fabulous outfits at an exclusive event, posing for the flashing cameras.

The Met Gala is a celebration of fashion. It's a fundraising gala for the Metropolitan Museum of Art's Costume Institute in New York City. Each year there is a different theme, and designers come together with celebrities to create stunning ensembles for the famed red carpet.

This year's theme is "Camp: Notes on Fashion" and it's shaping up to be one of the most memorable Met Galas in recent memory. This year, Lady Gaga is one of the co-hosts of the event, alongside Vogue editor-in-chief Anna Wintour, Gucci's Creative Director Alessandro Michele, Serena Williams, and Harry Styles.

The over-the-top and extravagant night kicked off with a truly magnificent entrance by Lady Gaga. Keep reading to see her unbelievable outfit!

The Met Gala is an iconic night for fashion and art.

Zendaya strutting her stuff in this Dolce & Gabbana number is proof. Celebrities go all out.

Is Zendaya the queen of the Met Ball?

She certainly looked like royalty at last year's Met Gala. Her "Joan of Arc" inspired look was undoubtedly one of the best of the night.

Her futuristic look from last year was quite memorable. The model knows how to work high fashion.

It must run in the family...

Because her sister, Gigi, always knocks it out of the park as well. The colors in this dress!

Of course, Rihanna knows exactly what she's doing when it comes to the Met Gala.

Her outfits are always some of the best of the knight. Rihanna is an expert when it comes to beauty and fashion.

Over the years, Beyoncé's had many different Met Gala looks. But this Barbie-esque number from a few years ago is breathtaking.

Beyoncé knows how to rock a tight dress.

She is effortless when it comes to her fashion. But let's be real: Beyoncé could wear a burlap sack and still look amazing.

Last year, Rihanna was a co-chair of the Met Gala.

She co-hosted alongside Amal Clooney and Donatella Versace. Her look shut it down.

Or how about that year she had 'Beauty and the Beast' vibes?

Nobody will ever be able to forget this look. This is why Rihanna is the baddest in the game!

Funny and fashionable? Mindy is a total dream.

Kim Kardashian is, of course, a frequent attendee.

Her look last year was flawless. But did you expect anything less from the social media titan and future lawyer?

The model looked like a total princess. Her date may have been Shawn Mendes, but we all know who her real Prince Charming turned out to be...

When it comes to fashion, Blake Lively can do no wrong.

Her Met Gala looks are always unbelievable. How can one woman glow so much? It's not fair to the rest of us!

The Mother of Red Carpets...

Emilia Clarke slays both onscreen and off. Too bad she didn't ride in on a dragon...that would've been the ultimate extra entrance.

Rosie Huntington-Whiteley may have worn this five years ago...

But it's still iconic and fabulous. Sometimes fashion just stands the test of time...

It's always fun visiting Met Galas from the past, but there's nothing quite as exciting as the present moment!

The Met Gala kicked off Monday evening, and within the first few minutes there were already several dramatic entrances...

Not to mention, he was carried into the Met Gala like true royalty. He is the ultimate goals.

His outfit also has wings.

Are you serious?! There is nothing more gorgeous than this outfit, I'm sure of it.

The Met Gala co-host took everyone's breath away when she stepped onto the carpet in this dress.

How about Laverne Cox, though?

That hair! Those lips! The sheer drama of it all! This is why the Met Gala is the best night ever.

But nobody does drama quite the way Lady Gaga does...

.@LadyGaga pulled off the ultimate over the top moment by walking from 84th and Madison to the steps of the… https://t.co/kiSdB3UTer
— Vogue Magazine (@Vogue Magazine)1557178873.0

We all knew Lady Gaga was going to go all-out for the Met Gala this year, but she truly surpassed expectations.

The singer and actress had a whopping four outfit changes in a matter of minutes.

Not to mention she essentially put on a small performance - she entered the Gala with a whole entourage.

Do you have whiplash from just thinking about that? She wore Brandon Maxwell, and it would seem that just the large, pink gown would be dramatic enough...

But of course not. This is Lady Gaga we're talking about.

She also had props to go along with her four different outfits. A star is born indeed.

That eye makeup, though!

Lady Gaga is the definition of a performer. Who else has quick-changes on the red carpet?

She even got down to her skivvies!

There is nobody quite like Lady Gaga. She never falls to go all-out for everything that she does.

She's the Mary Poppins' bag of the Met Gala. How many outfits is she hiding under there?

Who knew she had all those looks hiding under this giant, pink tent?

If you don't go big at the Met Gala, what's the point? It's a night of over-the-top extravagance.

The only thing better than Gaga's entrance is Margaret Cho's commentary on it.

Gaga re-emerges triumphantly and as she should after 18 months of publicly pretending to tolerate Bradley Cooper. S… https://t.co/KQmdraAK7c
— Margaret Cho (@Margaret Cho)1557178847.0

This tweet is hilarious and totally spot-on. Can Margaret Cho do live commentary on every major event, please?

Is this how they made Gaga's look?

Probably not, but it's still a great tweet. Here's to a night of glamour, drama, and pure camp-goodness.