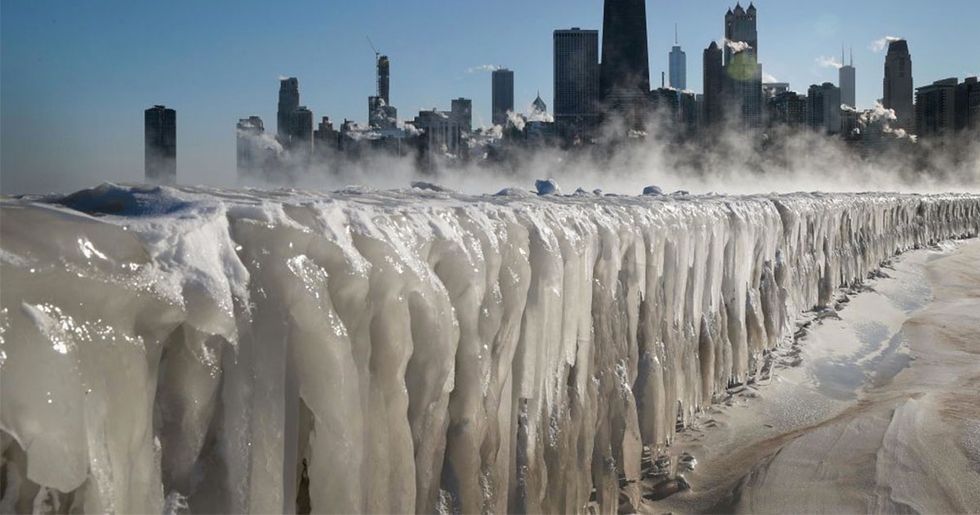 As the Polar Vortex rages on, some parts of the USA are experiencing record-breaking low temperatures. In fact, over the past few days, some states have been colder than Antarctica. It's safe to say things are getting pretty chilly.

One city which is experiencing particular lows is Chicago, where the temperature has dropped as low as -17 degrees Celsius. This week, the windy city experienced its coldest day in 150 years, for those looking for some perspective on the situation. Clearly, temperatures like these are no joke, and we don't envy those having to deal with them.

However, there has been a plus side to these incredibly harsh conditions. The rare combination of weather-factors have led to a stunning (and highly uncommon) wonder in the natural world. Lake Michigan, the second largest of the great lakes, has completely frozen over. People are sharing images of this phenomenon online - and they're a sight to behold.

This is Lake Michigan.

It's located, as you may have guessed, between Michigan and Illinois, in the part of the USA known as the Midwest.

It's the second largest of the Great Lakes.

Lake Michigan is also the only Great Lake located entirely in the USA - the others are shared between the US and Canada.

Calling it a lake does it somewhat of a disservice.

Lake Michigan looks more like the seaside, thanks to its enormous size. To put it into perspective, the surface area of Lake Michigan is only slightly smaller than the entire state of West Virginia.

When standing beside Lake Michigan, you've no hope of seeing across to the other side. For numbers fans, that's a surface area of 22,404 square miles.

Lake Michigan is so big that it has several ports around its edge.

And one of the most famous is the city of Chicago. The Chicago city waterfront is one of the city's most popular attractions.

Tourists can enjoy boat tours along the waterfront.

Chicago also boasts 24 miles of parks, beaches, harbours and marinas next to Lake Michigan. The magnitude of the Lake cannot be overstated.

In the past few days, winter has really picked up.

This is a result of what's called a Polar Vortex. It's a complicated meteorological process, but all we really need to know is, things are cold.

The polar vortex has affected many areas of the US.

New York City is feeling the chill, with temperatures dropping to the minus twenties (in degrees Celsius).

It's so cold, parts of Niagara Falls have frozen over.

People have shared pics on social media of the Niagara Falls area looking like a snow-scape from Disney's Frozen.

The cold has been having all sorts of negative effects.

People are particularly concerned about the homeless during these periods, as it can be highly dangerous to be exposed in such temperatures for an extended period of time.

Here a woman in Iowa's hair freezes immediately after going outside in these sub-zero temperatures.

The polar vortex has made international news.

Thanks to the internet, there's a great way to share images which viscerally depict just how extreme these temperatures are - for example, these sets of frozen jeans in Minnesota.

This image of what looks like a spiral of ice was created by throwing boiling water into the minus-temperature air. It freezes instantly and creates a magical-looking effect.

People have also been sharing jokes on the topic.

Hey I bought a reversible blanket scarf today so don’t believe it when they tell you I can’t handle a polar vortex
— Karen Kilgariff (@Karen Kilgariff)1548980382.0

Even those who live in cities largely unaffected by the polar vortex, like Karen Kilgariff (host of the My Favorite Murder podcast) who's based in sunny LA.

The Midwest is one of the areas most affected by the adverse weather conditions.

This time-lapse video shows the city of Chicago enveloped in icy steam.

The state of Michigan is facing similar temperatures.

The oddly-named  town of Hell, located in Michigan, has seen temperatures far below zero, leading Twitter users to point out that Hell has quite literally frozen over.

This has had shocking effects on the state's lake.

Lake Michigan has developed huge areas of ice, thanks to temperatures dropping lower than they have in decades.

People have been sharing breathtaking images on social media.

There's something that's just incredibly majestic about these pics. The crazy formations of ice are truly a sight to behold.

It's also oddly humbling for us to admit that we're essentially powerless at the hands of the weather.

Images such as this really hammer that point home.

When you see the majesty and power of the ice in contrast with the entirely human-built city-scape, it can really take your breath away.

Social media has been an excellent source of polar vortex content.

How cold is it in the Midwest? Bubbles are freezing. Remember to take your pets inside. #PolarVortex2019 https://t.co/ZfkbZdy2Si
— Daniel Schneider (@Daniel Schneider)1548869633.0

Images and videos from people affected all across the United States have quickly dissipated online. This video of a man blowing bubble which instantly freeze is a personal favourite.

Images like these help us non-residents imagine how cold it really is.

It's one thing hearing minus numbers in temperatures, but that can be hard to imagine feeling. Images like this frozen pasta and fork can help us really get into the zone.

It seems we're not the only ones struggling to imagine these conditions.

As this weather map shows. There's no colour cold enough to represent the weather being faced by states in the Midwest.

This also helps us get a perspective on the temperature.

When the USA is not just a bit colder than the south pole, but significantly colder, you know things are extreme.

Alongside the shocking and slightly funny Tweets, the polar vortex has also treated us to shots like the above, a majestic view over a frozen Lake Michigan.

The current images being shared of Lake Michigan look disturbingly familiar to shots from the disaster movie, The Day After Tomorrow.

There are tons of breathtaking images of the frozen lake.

This one, of a man walking across ice that looks a couple of feet thick, is particularly stunning.

Another really hammers home how dangerous these conditions can be.

This picture of a man whose eyebrows and eyelashes have become frozen solid is pretty frightening. There have been frostbite warnings across many parts of the Midwest.

Beautiful those these pictures are, the reality can be quite different.

Tens of millions of lives have been disrupted by the polar vortex, as schools and businesses shut down and flights remain grounded.

Wrap up warm and stay safe, Midwesterners! We have to say, in spite of how incredible Lake Michigan is looking, we're not too envious of your weather right now.