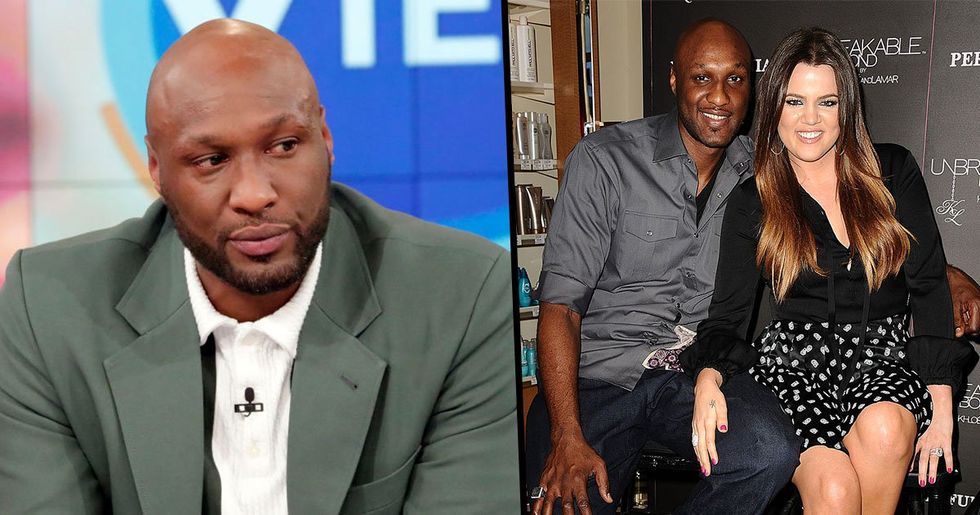 Lamar Odom is an American basketball player who recently released a tell-all memoir named Darkness to Light in which he touches upon the ups and downs of his life. From tough times during his early years to his career as a professional athlete, Odom describes how the events that he has experienced throughout his life has made him who he is today.

He talks about the impact that certain people have made on him, which, of course, means that many well-known celebrities make an appearance throughout the book, from past lovers, including his ex-wife of four years, Khloe Kardashian, to fellow athletes like Kobe Bryant.

These revelations are actually very sensitive as they expose details about difficult times in which his demons got the best of him. It's extremely brave of Odom to put himself in such a vulnerable position, but it seems as though he wanted the world to know his story.

Keep scrolling to read about the 9 shocking things that Lamar Odom revealed about his life.

Who is Lamar Odom?

Odom was born in New York in 1979 and was brought up in a rough family situation. His father was a heroin addict and his mother died early on in his life due to colon cancer. That's pretty difficult for a twelve-year-old to handle. He admitted in an interview with Sports Illustrated that the last words that his mom uttered to him were: "Be nice to everybody". Heartbreaking.

It didn't get any easier...

With minimal family support, he was left to fend for himself, but constantly seemed to find himself in trouble at school and that continued all the way through into his professional career.

He didn't make it easy for himself either.

Odom did eventually become a professional athlete, but the path to his career was filled with problems. The main one that seemed to continue throughout his entire life was cheating. Odom talks about this in detail in his memoir and reveals some very interesting experiences wherein he apparently couldn't help himself. Keep scrolling to read all about them.

Despite winning multiple awards for his talents, including the "NBA Sixth Man of the Year" award in 2011, his road to fame has been questionable. During his college career, he was involved in multiple cheating scandals which brought his progression to a halt. While attending the University of Nevada, which he was ultimately kicked out of, it was discovered that he may have cheated in his ACT exams after he was awarded an unusually high score. Come on, Lamar, you know better than to cheat in your exams! That summer, he found himself under investigation for soliciting prostitution. To say that his early years were a difficult time would be an understatement.

Eventually, after a few more hiccups, his career took off and he found himself thrust into the limelight.

He played for many basketball teams, including Miami Heat and the LA Lakers, cementing his career as a professional basketball player.

His personal life was also a whirlwind.

After divorcing his first wife, he married Khloe Kardashian in 2009, after only a month of dating. Boy, they moved fast! Because the couple was constantly in the media's attention, we all heard about the problems that they faced throughout their seven-year marriage. And in 2013, they decided to call it quits, filing for a divorce. It must have been a terrible strain on their relationship, trying to keep things private, as we will discover in the revelations that Odom mafe about his time with Khloe.

But not all was bad!

If they lasted for four years, they must have had some good times too, right? Let's take a look at some of the highlights. Halfway through their marriage, they released a perfume together named "Unbreakable Bond by Khloe and Lamar," which was supposed to be a representation of their relationship. Yikes. But at the time, it was cute as hell.

They also shared plenty of lovey-dovey moments throughout the filming of Keeping Up with the Kardashians.

"Khlomar," as some fans refer to the couple, were so interesting that they were given their own spin-off show called Khloe and Lamar. Not a very inventive name, but the show was a hit. Odom even admitted that he really enjoyed the fame that came with doing both shows. This all happened around the peak of their relationship. They shared every aspect of their lives, even the most sensitive parts like Khloe's fertility problems. However, after their divorce, the episodes only served as a reminder of the ups and downs of their relationship.

One problem that remained constant, and that Lamar talks about in more detail in his memoir, is his addiction problem. Drugs, drink and sex. It was tough dealing with all three issues, but he (just about) managed to survive it.

He was linked to many other women, too. The list is extensive and Odom mentioned that the number of women he had sex with had probably reached the thousands! Keep scrolling to read what was so important about the women he actually dated. Here's a list of the 10 most shocking revelations made in Odom's memoir.

Shock horror (or not!), but one of the main aspects of Odom's memoir is his extreme compulsion to cheat, whether it be in exams, as we found out earlier, or in relationships. He was so desperate to pass his classes that he paid thousands of dollars to ensure that he did. And it worked... until he got caught. Whoops!

When Lamar joined Miami Heat, he lived in a six-bedroom home with some of his teammates, and what better way to break in a new home than with a massive party? He and his friends made sure to invite every "stripper, groupie, and side piece" that they knew. There were orgasms left, right and center. In the pool, on the floor, against walls. It was complete mayhem, but I'm sure none of them were complaining!

Just when you thought there could be no more cheating scandals, I've got one more for you. I hope this is the last one, but I can't make any promises. During the ructions process for the 2004 US team at the Olympics, all members are required to take a drug test. Of course, it's a standard procedure. But Odom knew for sure that he was not going to pass because he had been "smoking weed everyday that summer," so you'll never believe his solution. "We ordered a giant rubber black c**k to arrive the next day". Yes, you read that right.

Odom's trainer at the time proceeded to urinate into the fake penis just before the test and here's the real shocker, it worked! He passed the test!

This chapter started with a bold statement: "I've had sex with more than two thousand women". Odom claims that he doesn't remember most of the names of these women and that's mainly because they were "one night stands," so they didn't really mean much to him. He had unprotected sex multiple times and paid for so many abortions that he'd lost count. He did say that he wasn't proud of it, but I guess that's what happens when you're addicted to sex.

5. His Relationship with Taraji P. Henson

Actress and singer, Taraji P. Henson, known for her role in American drama series, Empire, is one of the hot topics of all the revelations. Their relationship has been described as a "secret affair".

It was all going well for a little while...

After meeting at a Hollywood party in 2008, the pair immediately hit it off. Odom describes her as a "wise women" who refused to be just another name on the list of girls associated with the athlete. He seemed to genuinely enjoy her company.

But the break-up was almost inevitable.

They did become quite serious, going out to dinners with other famous faces but, you guessed it, there had to be cheating involved. Odom just couldn't resist his sexual urges and reverted back to his old ways.

As I mentioned before, Lamar's relationship with Khloe was one hell of a roller coaster ride. But this was probably the lowest point. As he got closer to Khloe and the rest of the Kardashians, his dependence on drugs was getting worse.

Nothing good can ever come from a drug addiction.

One day, when Odom was completely high on cocaine and ecstasy, he started punching holes into the wall fearing that there were microphones hidden in there. This frightened Khloe, so she called one of his friends to come over in the hope that he would calm him down.

However, Odom wasn't having any of it.

He screamed in her face: "You trying to embarrass me in front of my friends? I'll f**king kill you! You don't know what I'm capable of!" Anyone would freak out if someone said this to them! Poor Khloe!

Um, I know I said that all the cheating scandals were over, but it seems as if Odom's got a few more tricks up his sleeve.

You wouldn't believe this story!

One night, when the basketball player had gone AWOL, Khloe tracked his whereabouts using his Black Card, and discovered that he was drugged up in a hotel with a bunch of strippers. When she saw the scene, she jumped on the first girl she saw and started beating her up. Kris and the security team that was with them at the time pulled her off and they all left out of the back door.

We feel for you, Khloe!

It seems as if she really put up with a lot of s**t from this man!

According to Lamar, his relationship with Khloe was completely damaged by this point, but he still had a little bit of hope left. That was until Kris Jenner got involved.

What she did wasn't nice at all.

Odom claimed that Kris actually called him to say that Khloe really needed to speak to him. So, of course, he went over to see her and when he got there, Khloe was very confused. Apparently, she had never said such a thing. "Kris knew this was my last chance," he says, "but she didn't want a drug addict in the family. It wasn't good for business. Any chance I had left with Khloe exploded on the spot."

We kind of saw this coming.

Even though the two of them were a good couple, their bad times seem to override their good. At this point, there was bad blood between their families, so it would quite frankly be disastrous to keep the relationship going.

9. His Near Death Experience

After the horrible arguments with the Kardashians, Lamar found himself in another brothel, surrounded by everything that he knows best. Drink, drugs and women. But after four hardcore nights, he suffered from twelve seizures and a further six strokes.

When Khloe found out about what had happened, she, Kris and Kim all flew out to be with the basketball star. He praised Khloe and Kim for not leaving his side but, as for Kris, he claims that she still "cared too much for the brand".

So there we have it!

Odom went through a lot in his lifetime and his book, Darkness to Light, tells the story of each of the most defining moments, from his battle with addiction all the way down to the breakdown of his relationships. Some good has come out of all this, though; all of these events have made him the man that he is today. Darkness to Light is available to purchase right now.