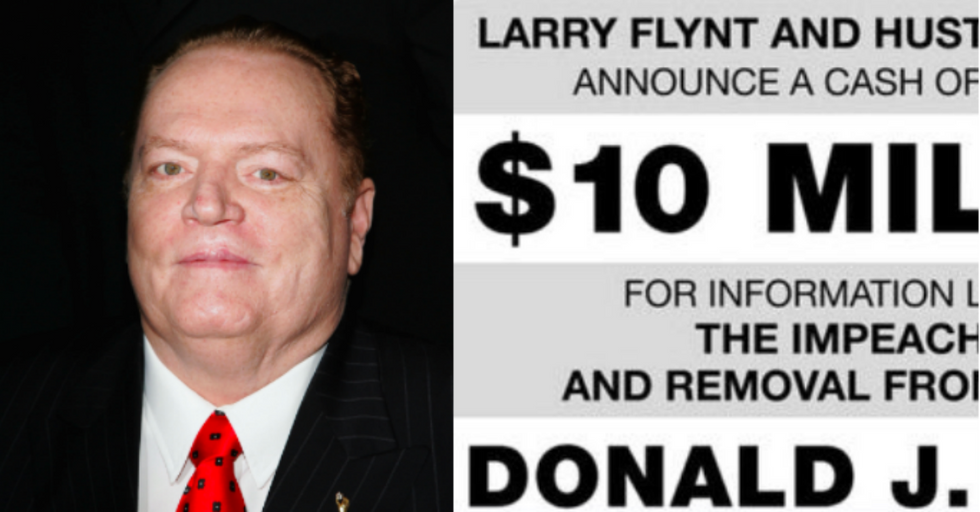 Larry Flynt is the publisher of Hustler magazine, the subject of the 1996 film, The People vs. Larry Flynt, and a key player in the 1988 Supreme Court First Amendment case, Hustler Magazine v. Falwell.

Flynt is all about making big splashes, and his latest stunt is sure to cause some ripples.

Larry Flynt is best known as the publisher of Hustler magazine.

Now, he's getting into the impeachment business. On the morning of October 15, Flynt tweeted out a tempting offer:

Flynt is ready and willing to pay $10 million for information that leads to "the impeachment and removal from office of Donald J. Trump," who, as you're probably aware, is the President of the United States.

The full-page ad with giant black-and-white text was published in the Sunday issue of The Washington Post.

The text-heavy ad lays out all the reasons Trump's presidency is illegitimate and harmful, and the specific charges against him in the case for impeachment: 1. Colluding with a hostile foreign power to rig our election, and obstruction of justice in the firing of FBI Director James Comey. 2. Inciting violent civil strife with his racial dog-whistling and unconscionable defense of the KKK and neo-nazis after the Charlottesville riots. 3. Compromising domestic and foreign policy with his massive conflicts-of-interest global business empire. 4. Telling hundreds of bald-faced lies, and complete ignorance of world affairs. 5. Gross nepotism and appointment of unqualified persons to high office. 6. Sabotaging the 195-nation Paris accords to save the planet from future climate cataclysm. If that is not at least a misdemeanor, the term is meaningless.

"Impeachment would be a messy, contentious affair," Flynt's ad warns, "but the alternative — three more years of destabilizing dysfunction — is worse."

Flynt believes that there is a "smoking gun" buried somewhere, maybe in Trump's tax returns or "in other records from his far-flung investments," and he's ready to reward the person who finds it with $10 million. Flynt concludes the ad with this: "I feel it is my patriotic duty, and the duty of all Americans, to dump Trump before it's too late." He then provides a hotline number (1-800-251-2714) and an email address: hustlertipline@lfp.com. Well, you heard the man. Get on out there!