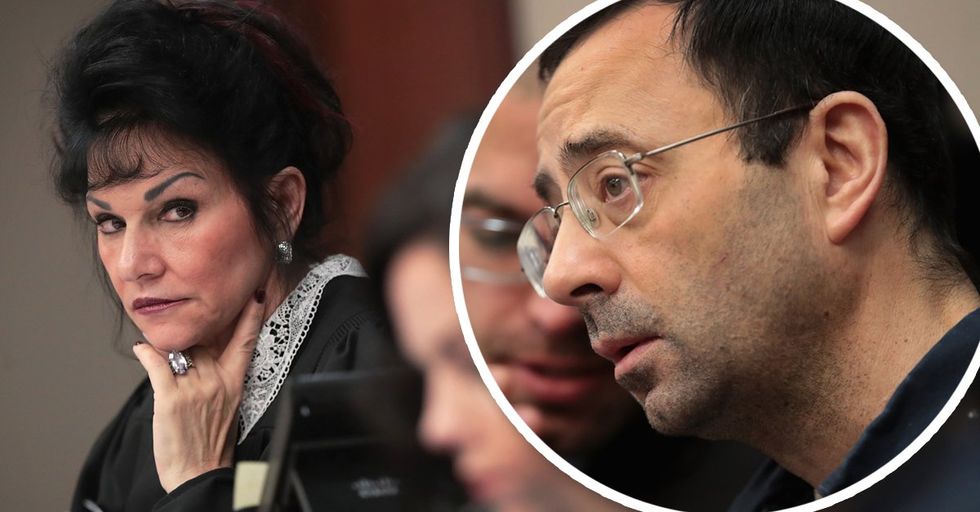 Today, former "Olympic doctor" Larry Nassar was sentenced to 40 to 175 years in prison for molesting over a 160 girls and women, many of them current or former top tier athletes. This is in addition to the 60 years he's currently serving for child pornography. Presiding judge Rosemarie Aquilina declared, "I just signed your death warrant," as the sentence was read.

Nassar's sentence comes after an unprecedented week-long hearing, during which 89 of his victims explained, many in graphic detail, the effects that Nassar's molestation had on their lives.

These are the testimonies of more than 100 women who were sexually abused by a doctor. Their powerful statements ha… https://t.co/ej8TTamBEH
— Channel 4 News (@Channel 4 News)1516819041.0

Woman after woman detailed the trauma Nassar's actions inflicted personally, as well as their struggle to get others to believe them. In fact, the father of one woman, Kyle Stephens, tragically ended his life after he discovered she'd been telling the truth for years, and he hadn't believed her.

#LarryNassar - Photos will be shown on the big screen of the victims at the ages they were assaulted. This was the… https://t.co/IIYXaV46rA
— Cathy Russon (@Cathy Russon)1516113794.0

“Had he not had to bear the shame and self-loathing that stemmed from his defense of Larry Nassar, he would have had a fighting chance," Stephens said.
But how was Nassar able to continue his predations for so long? And why was it so difficult to believe his victims even when they came out, one after another, year after year? The answer lies in Nassar himself.

Nassar, was, by all accounts, a seemingly pleasant and affable man, who "used his charm and his position as national team doctor to make everyone his gossip buddy, his special friend, his best pal." This is according to Lauren Hopkins, editor in chief of The Gymternet, and a longtime confidante of Nasser's.
Nassar molested his victims by pretending to do treatments on them, specifically, "intravaginal adjustments," procedures done by "accessing, assessing and rebalancing the pelvic floor (part of the pelvic 'bowl') through the vagina."

Intravaginal adjustments are a legitimate medical procedure which can do a lot of good, but in Nassar's hands, they became a tool for evil. Several of his victims noted that he did the procedure ungloved, often closed his eyes to "rest them", and, even worse, was visibly aroused as he completed it.

This photo is worth more than 1,000 words. Olympians Aly Raisman and Jordyn Wieber at Larry Nassar's sentencing. https://t.co/OrqwQd7nRp
— stephanieangel (@stephanieangel)1516378962.0

When they complained, they were told it was a medical procedure. In fact, when one MSU student, Amanda Thomashow, complained, Nassar’s colleagues told the Title IX investigator looking into the case that "Thomashow wasn’t familiar with osteopathic medicine and wouldn’t know the “nuanced difference" between a legitimate procedure and a sexual assault."

As Lauren Hopkins notes, "Thomashow was a medical student at the time." Nassar then went on to molest Thomashow's 9-year-old sister, Jessica.

Nassar used his charm and his elevated position to protect himself from would-be accusers. He had an army of people, including Olympic officials, MSU staff, and parents, who he made feel were his special friends, and they would speak up whenever another person accused him.

Even worse, he operated in that grey area where many of his victims doubted, even to themselves, that they were being victimized, as is the case of one of his former supporters,  Trinea Gonczar, a 37-year-old woman who Nassar "treated" over 800 times from when she was 6 until she was an adult. Hopkins explains that "Gonczar believed her “treatments" were legitimate, and that those who considered them abuse ― including some of her closest friends ― were 'just confused.'"
Nassar was so esteemed, "parents and coaches were honored to send their kids to him because it meant their kids were special, and they trusted whatever he said or did without question." He made them, and everyone around him complicit in his actions. He was a predator of the worst sort – one that manipulated his victims and the people that were supposed to protect them from harm.

When most people hear about the Nassar case, they inevitably ask, “Why didn’t anyone speak up sooner?" As former Twistars gymnast Bailey Lorencen recalled in her statement on Monday, Nassar’s enablers shut down reports of abuse, and publicly called the first victims to come forward liars. “It took 37,000 pornographic images of children on his computer for people to believe that Nassar could do something like this," Lorencen told the hearing. “And you wonder why nobody wanted to speak up?"

As Judge Aquilina sentenced Nassar, she stated that his ''decision to assault was precise, calculated, manipulative, devious, despicable.''

''It is my honor and privilege to sentence you. You do not deserve to walk outside a prison ever again. You have done nothing to control those urges and anywhere you walk, destruction will occur to those most vulnerable."

Nassar made a brief statement, saying that his victim's testimonies  had ''shaken [him] to his core," and that he had ''no words'' to describe how sorry he is for his actions.

''I will carry your words with me for the rest of my days'' he stated, while many of his accusers wept.