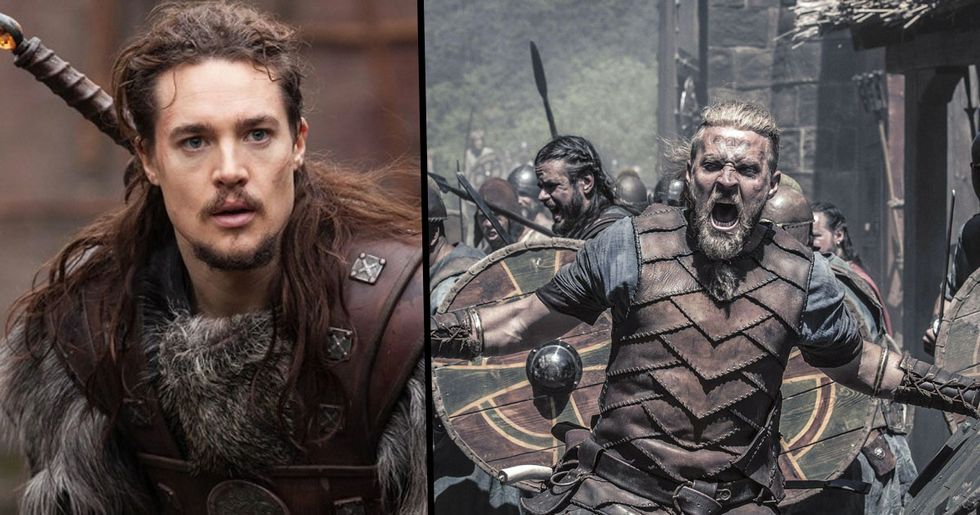 Now that the final episode of Game of Thrones has aired, there seems to be no excitement left on Sunday evenings. There's only so much cleaning that you can do before you want to sit down and binge-watch something new on Netflix.

I know it might be hard to dedicate your life to a new series, but it's time to accept that your relationship with Game of Thrones has come to an end. It's time to move on.

And what's better than moving on to another historical fiction series? And, yes, you can binge watch this one, too.

The Last Kingdom is a television series based on books written by Bernard Cornwell. So get ready for more drama, more fighting and more bloodshed, because you're in for a wild ride.

Picture this scene. England in the ninth century during the Anglo-Saxon period. The country is divided into separate kingdoms, with warriors constantly fighting over land. Gradually, the lands owned by the Anglo-Saxons are attacked and eventually taken over by the Viking Danes, all except for The Kingdom of Wessex, which serves as the last powerful stronghold against the Danes. Sounds good already, huh? It gets better. I should also mention that the actual series is shot in rural Hungary, so the mountains, lakes and forests all play an important role in setting an accurate scene. I must admit, the visuals of the set are outstanding. Anyway, let's go through some of the main characters.

This is the protagonist of the series. I know what you're thinking. He looks familiar, doesn't he? But I can assure you, this isn't Jon Snow. This is Uhtred of Bebbanbuug. He was born as a Saxon but raised as a Dane, so he possesses qualities from both sides. He's a natural born leader, fearless and charming, which makes him fatally irresistible to women. However, he only has one thing on his mind: reclaiming his homeland of Bebbanburg. Growing up in a strict household, Uhtred spent most of his early years training to be a priest, rather than a warrior. That was until he was captured by the Danish army. He really went through a lot pretty early on, but, rather than complaining, he does whatever he has to do in order to reclaim his homeland. We stan Uhtred.

This is Brida (with Bernard Cornwell!).

Brida was also captured by the Danish army. She's outgoing and loud, which helps her fit in perfectly with the Danes. She and Uhtred have a complicated relationship, filled with love and hate. Brida is the perfect representation of an outspoken and fearless woman during the Anglo-Viking era.

Now we get to Alfred the King.

A noble leader who hopes to unite all the kingdoms. Unlike Uhtred, he thrives best as a thinker, rather than an impulsive warrior. Although he is burdened with leadership, he remains unfazed, even when the odds are stacked against him. Those who did not appreciate Alfred and everything he had to offer later recognized him as the great king that he was.

Ubba is a little unhinged, to say the least. Though he relies a bit too heavily on his sorcerer, Storri, he is considered one of the most fearless warriors across all the kingdoms. Everyone fears him and his power.

And, finally, this is Ubba's right-hand man, Guthrum.

Guthrum's a cold-hearted killer. He's tough and he's blunt. However, beneath the rigid exterior, lives a troubled man with many internal issues. His growing fascination with Christianity conflicts against his violent nature but, overall, I have to say, he's one of the most complex characters in the series. Those are just some of the characters in The Last Kingdom, but there are plenty more if you couldn't find your favorite in this bunch. The really good thing about the show is the way that it introduces the characters. Not too quickly. Not too slowly. Just right. Let me take you to where it all starts. I promise there won't be any massive spoilers!

Episode one will help you to decide if this is the right show for you.

What would you expect from an episode in a historical series? Blood, swords and warriors at the very least, right? And I'll tell you now, the first episode does not disappoint in that respect. We go straight into the action. The land is being attacked by the Danes who arrive on ships and cause mayhem amongst the people. Uhtred is captured and taken by the "enemies". There's death and destruction right from the word go. What more could we ask for?

Keep scrolling if you want to see the full trailer for episode one!

The best part of the episode is the use of iconic quotes that only prove significant later on. My favorite has to be: "All this way and no reception party?" It's almost laughable, the way that the leader of the Danes, Ragnar, comes in and utters these words after destroying the entire village. It's hard to hate him though because he does have a more warm and nurturing side which is revealed as the story develops.

But I'll let you decide for yourselves.

Here's the trailer for episode one, so you can have a taste of the action!

Did I manage to convince you?

If that trailer didn't peak your interest, maybe you're just better off re-watching Game of Thrones. You're not ready to move on just yet. When you are, though, The Last Kingdom will be on Netflix waiting. But if you're positive that this really isn't your kind of thing, here's a list of other shows that may be better suited to you. We've even ranked them for you!