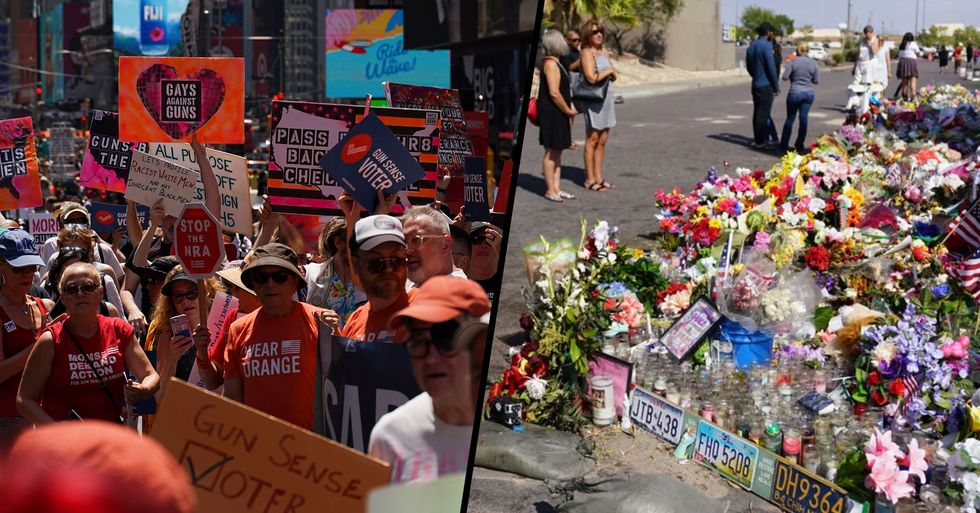 For the first March in nearly 2 decades, there were no school shootings across the United States last month.

Keep scrolling to see why people don't see this as a thing to celebrate at all...

It can be gathered quite loosely with the definition of a "mass killing" because that's exactly what it is, isn't it?

A fashion brand was recently noticed recently for all the wrong reasons...

Bstroy, a "neo-native, post-apocalypse streetwear brand" from the U.S, depend strongly on their Instagram account to advertise their quirky and, let's face it, overpriced fashion.

They began showcasing the menswear collection on Instagram and it was what everyone would expect from Bstroy - edgy, quirky, and just a little weird.

But there were certain garments that ruffled the politically correct feathers of our nation...

Bstroy featured 3 different hoodies in the collection, and all the hoodies are designed to look like they have survived a school shooting. If you think that sounds problematic, then just wait until you see them...

Columbine High School of Colorado watched a mass shooting unfold back in April of 1999. Twelfth-grade students Eric Harris and Dylan Klebold murdered twelve students and one teacher before each of them committed suicide.

The next hoodie featured was one displaying the Sandy Hook school logo.

On December 14th, 2012, twenty-year-old Adam Lanza went into Sandy Hook Elementary school in Connecticut and shot and killed twenty-six people - including children aged between 6-7 years old. He had shot and killed his mother before driving to the school and committing these horrific murders.

It is also the fourth-deadliest mass shooting by a single person in U.S. history.

The final hoodie on display took on the logo of Stoneman Douglas.

The Stoneman Douglas high school shooting took place in February of 2018 in Florida, killing eighteen people and injuring seventeen more. Nikolas Cruz was a nineteen-year-old expelled student who opened fire on the school with a semi-automatic rifle.

Why wasn't anything done in the past about Nikolas Cruz?

In both 2016 and 2017, the sheriff's office received a number of tips about Cruz's threats to carry out a school shooting. He had previously posted on Youtube and on social media talking about his plans to conduct a mass shooting, but the authorities dismissed these tips which eventually lead to Cruz killing all of these innocent people.

Bstroy made sure each hoddie featured tiny details, such as holes cut into them to mimic that of bullet holes. On Instagram, comments began flooding in, such as: "My dead classmates should not be a f****** fashion statement."

"I lived through this," another person wrote. "To make money off of something pathetic like this is disgusting. You don't even know how it is to live every day with reminders everywhere you go."

But, amid the current global pandemic...

Some news has come to light surroudning school shootings.

Last month reportedly marked the first March without a school shooting in the United States... since 2002.

Robert Klemko tweeted that the last time there was a March with no shootings was nearly 2 decades ago, and even that was a close call. His tweet started to gain attention very quickly, with some questioning the stats behind it, as well as debating which kind of gun violence-related incidents could be defined as being a "school shooting."

In fact, according to reports, gun sales increased significantly during the last month.

The debates around gun control continue to rage on...