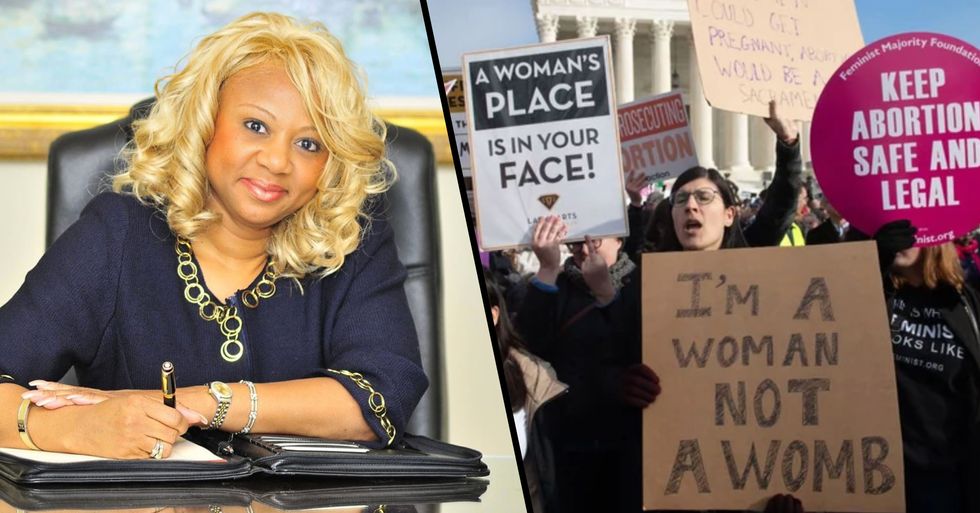 The topic of abortion is a sensitive and extremely divisive one. It's an issue that sparks protests from both pro-life and pro-choice activists and remains a hugely relevant and debated issue.

But last year, the world was left more divided than ever following the introduction of a controversial anti-abortion law, dubbed the "heartbeat bill" across several states.

Tensions are rising once again. Keep scrolling for the full story...

On May 7th 2019, Brian Kemp, the Governor of Georgia, signed the anti-abortion "heartbeat bill".

According to Huffpost, Kemp’s signature overrode the old state law that allows abortion up until twenty weeks and, as a consequence of the bill, Georgia is now one of the most restrictive states in America when it comes to abortion.

The law made it illegal to have an abortion when doctors can detect a fetal heartbeat.

Kemp believed that the bill is doing important work.

"Wait, what? Easy? It's never an easy decision," Twitter-user, Shannon Reno ‏says. "No woman wakes up and thinks, 'Today is a great day for an abortion!' However, she CAN (and should always be able to...)"

Celebrities like Reese Witherspoon spoke out against the bill.

Many women thanked her for using her platform to speak out in the comments.

And women aren't the only ones who spoke out against the bill.

Former One Direction-er and current British pop sensation Liam Payne explained his stance, stating: "I have so much respect for women. Watching someone go through pregnancy and how tough it can be at times, and us as men never have to go through that, so how can we even comment or decide what women should or shouldn’t go through?"

Payne speaks from experience, having watched his girlfriend Cheryl Cole go through pregnancy and childbirth.

We love seeing men add their voices to this cause!

Even our favorite Friend, Courteney Cox, spoke up...

Cox is an Alabama native. She voiced her horror at the bill being passed in her home state.

Some other big names weighed in on the issue.

The Good Place actress, model, presenter and activist, Jameela Jamil spoke about her personal experience and why she thinks that the bills being passed are wrong.

Jamil said that the new laws are "blatantly demonstrative of a hatred of women."

Shortly after the passage of the bill, HuffPost reported that the Center for Reproductive Rights pledged to sue the state of Alabama.

Back in March last year, Kemp claimed that "there will no doubt be a legal battle" if the bill passed.

And the problem isn't just in Georgia.

"Bills marking a fetal heartbeat as a deadline for abortion have also been introduced this year in Tennessee and Mississippi," HuffPost noted.

Let's look at some of the viewpoints that are being put out there...

Some people are very much in favor of the bill.

Some seem to believe that the heartbeat bill is the "lesser of two evils."

Is denying women the choice to go forth with, or to terminate, their pregnancy "better" than late-term abortion?

Is there a better solution?

Maybe abortion isn't ideal, but right now, it's the only choice that women have if they don't want to move forward in their pregnancy - or the choice that they haven't got in this case.

Really, it isn't about whether you're pro-life or not.

The bills that are being passed are an attempt to prevent anyone from being anything but pro-life. It's about choice and about women having control of their own bodies, not about whether or not abortion is good or bad.

That's what's got so many people riled up.

Imagine you miscarry but people don’t believe you or you have enemies who contact authorities to say you terminated… https://t.co/c2dPdUh65v
— Pieke (@Pieke)1557591551.0

The control that these bills have over women is, quite frankly, terrifying.

Women are being affected by this and they had virtually no say whether or not the bill was passed.

The Washington Post has revealed that "for every woman voting for new abortion bans in Missouri, Georgia and Alabama, seven men did".

What if a woman is forced to give birth and can't sustain a good life for that child?

What if the child is forced to live with a low quality of life or has to live unwanted and unloved?

Rape is an issue that many are bringing up.

As a victim of #sexualabuse, the fact that #Georgia would allow rape victims to carry a pregnancy is disgusting. Al… https://t.co/UccJEvN4PI
— Tess (@Tess)1557464067.0

The BBC notes that under the bill that was passed in Alabama, "doctors face 10 years in prison for attempting to terminate a pregnancy and 99 years for carrying out the procedure."

Some are saying that the bills protect rapists over women.

One man was given just twelve years in prison for continually raping and abusing his daughter. Compare this to the ninety-nine years that a doctor may receive for consensually terminating a pregnancy, and it's not hard to see that there's a pretty big problem here.

Some people have pointed out this similarity.

For fuck's sake, The Handmaid's Tale was supposed to be a warning, not an instruction manual.
— Denizcan James (@Denizcan James)1558039615.0

The Handmaid's Tale is a dystopian novel - and TV series - about a society in which women are forced into sexual servitude. They are the property of the state and the government decides what happens when it comes to reproduction. Sound familiar?

On her talk show, actress, Busy Phillips, shared her experience as a teenager.

Her story is heart-wrenching, but sadly it's similar to so many others.

The bill was meant to go into effect back in November.

But, U.S. District Judge Myron Thompson temporarily blocked the legislation, so it's important to note that the legislation isn't currently in effect.

But it seems the controversial bill is back in the headlines once again this week.

Although this time, it's one lawmaker's reaction to the anti-abortion bill that's got everyone talking.

The legislation would require all men to get a vasectomy at the age of fifty in a bid to reduce unwanted pregnancies.

That's not all she's proposing...

As per HuffPost, under the law, men would be required to get vasectomies within a month of turning fifty, or after their third child is born, whichever comes about first.

Men would also be required to pay for the vasectomy themselves.

But there's a deeper meaning behind the bill.

It has been created as a direct response to the anti-abortion bill introduced last year.

The Democratic state legislator said men "should not be legislating what women do with their bodies," and so, she has proposed this new bill to show how ridiculous it is to have laws controlling what people do with their own bodies.

Rep. Hollis has been clear that the bill is "symbolic."

And that she is proposing it to allow men to put themselves into women’s shoes and understand what it feels like to have others governing your body.

Hollis herself believes it's outrageous to have any law governing people's bodies - no matter their gender.

But her aim is to "neutralize last year’s abortion ban bill, and sends the message that men should not be legislating what women do with their bodies."

As you'd expect, reactions have been strong.

Many women praised Hollis' symbolic gesture, however, she has also drawn in her fair share of criticism for the controversial move.

Many were quick to support Hollis.

Like this user, who called out those misunderstanding the point.

Others hailed the move as "genius."

@RepHollis @MichaelLHoffman This is Genius! Men are so used to restricting women's rights that it comes as a second… https://t.co/vUfPxJMcmG
— Zaharia Adrian (@Zaharia Adrian)1581669512.0

Reactions were very mixed, although there's no denying she has had numerous supporters.

Some began calling her a "communist."

She was even branded as "crazy" by one user.

Some people clearly didn't understand the point she was trying to make. Of course, forcing men to get vasectomies is ridiculous, but so is introducing an anti-abortion law governing women's bodies too.

Many were taking her announcement very seriously.

And were quick to remind her that she had "no chance" of the bill ever getting passed.

Others called her out for being a fame chaser.

Many believed she's out here for a quick 5 mins in the spotlight. Whatever your view is, there's no doubt that abortion is still such a hugely divisive topic. But there's one thing we can all agree on - it's nothing to joke about. Keep scrolling to read about a girl who made a controversial abortion joke on TikTok.