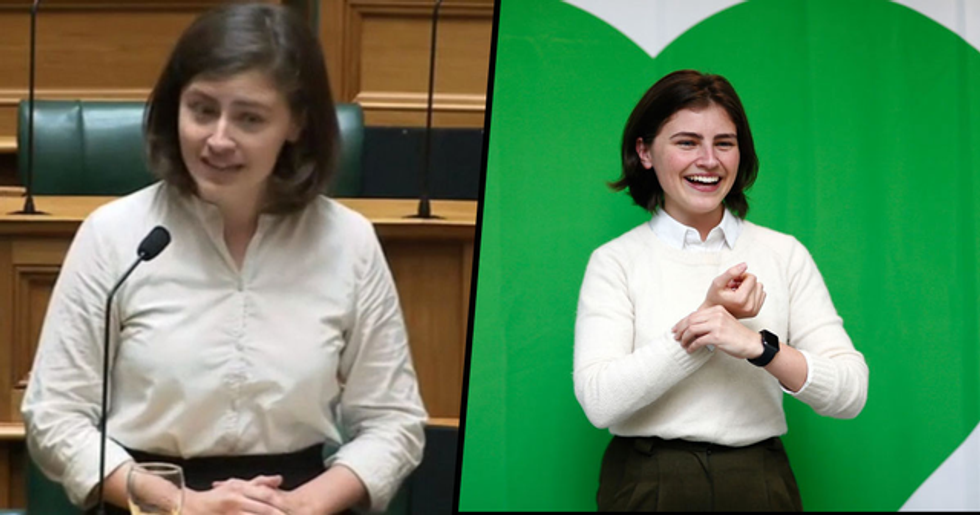 Memes are taking over the world, and it seems that they have now wormed their way into major political debates.

New Zealand MP, Chloe Swarbrick, was delivering a speech about the importance of a stricter climate change policy when she was rudely interrupted by a heckler who clearly disagreed with her politics.

And, rather remarkably, without so much as missing a beat, the twenty-five-year-old swiftly shut down her heckler with "Ok, Boomer."

Obviously, the young politician's response went viral, and (most) people were quick to praise her for such a swift and sassy shutdown... Though, of course, the real-life Boomers out there weren't too impressed with her remark.

Let's start with the basics.

What exactly does the saying - or meme, as some would class it - "Ok, Boomer" actually mean?

The phrase "Ok, Boomer" has sprung to popularity in the last few months.

According to the reliable sources over at knowyourmeme.com, "OK Boomer" is a dismissive retort often used to disregard or mock "Baby Boomers" and those who are perceived as old-fashioned and being out-of-touch.

It has become a rallying cry for fed-up Millenials.

Those who are part of the "younger generation" have been resorting to the saying, as a response to the older, more traditional people from the "older generation" whom they clash with.

And, as these things always do...

The whole thing has become somewhat of a meme.

And, boy, did it deliver.

And the teenager who designed the merch gave her insight into what the phrase means. Speaking to the New York Times, Shannon O'Connor, nineteen, explained: "The older generations grew up with a certain mindset, and we have a different perspective." "A lot of them don’t believe in climate change or don’t believe people can get jobs with dyed hair, and a lot of them are stubborn in that view. Teenagers just respond 'Ok, boomer.'"

The real-life baby boomers aren't too happy with the new saying - This guy even went as far as to compare it to a racial slur. Really, Bob?

But most people find the whole thing rather funny...

These boomers just don't help themselves, do they?

And now, something groundbreaking has happened...

Because, for the first time ever, "Ok, Boomer" has made its way into the walls of parliament.

Chloe Swarbrick is a Green Party MP based in Auckland, New Zealand.

And the twenty-five-year-old politician has become the first to use the "OK, Boomer" phrase while debating in parliament.

And was stressing that "if we don’t get this right, nothing else matters."

She then moved on to emphasize that the burden of dealing with climate change will fall upon her generation's shoulders...

“In the year 2050, I will be fifty-six years old; yet, right now, the average age of this 52nd Parliament is 49 years old." She explained defiantly to the chamber.

As she made her point, however...

The MP seated beside her pulled a rather bemused look, and a heckler jeered at her age and shouted out something indistinguishable at the young politician.

And, without missing a beat...

Swarbrick causally responded with, "Ok, Boomer," before continuing with her speech.

Though the reaction of the other politicians couldn't be heard in the video...

Her comment obviously ruffled a few feathers, because she took to Facebook to address the incident, writing: "Today I have learned that responding succinctly and in perfect jest to somebody heckling you about *your age* as you speak about the impact of climate change on *your generation* with the literal title of their generation makes some people very mad."

Because of course some Boomers were offended.

But many people loved it...

Including Boomers! Who'd have thought it? One social media user wrote, "As a 'Boomer' (the good kind!) I salute you. I'm pretty depressed about the way my generation has handled things so, good for you. I wish you much success!" while another commented, "I’m a 'boomer' and I love what you’re doing. Stick with it, you have lots of support and admiration."

And many have thanked the politician for her work towards positive change...

And others have dubbed her as "brilliant" and a "legend."

Even New Zealand's parliament seems to be on board with Swarbrick's comment...

We apologise for the error, and have updated the captions accordingly. Clearly we need to start doing all-office me… https://t.co/6GJBf8k1UF
— NZ Parliament (@NZ Parliament)1572987458.0

After a typo their subtitles, which picked up the phrase as "Ok, Berma", they apologized and joked about having office meme briefings.

And, always standing by what she believes in...

Chloe reminded people that, "Memes are cool, but have you tried political action?"