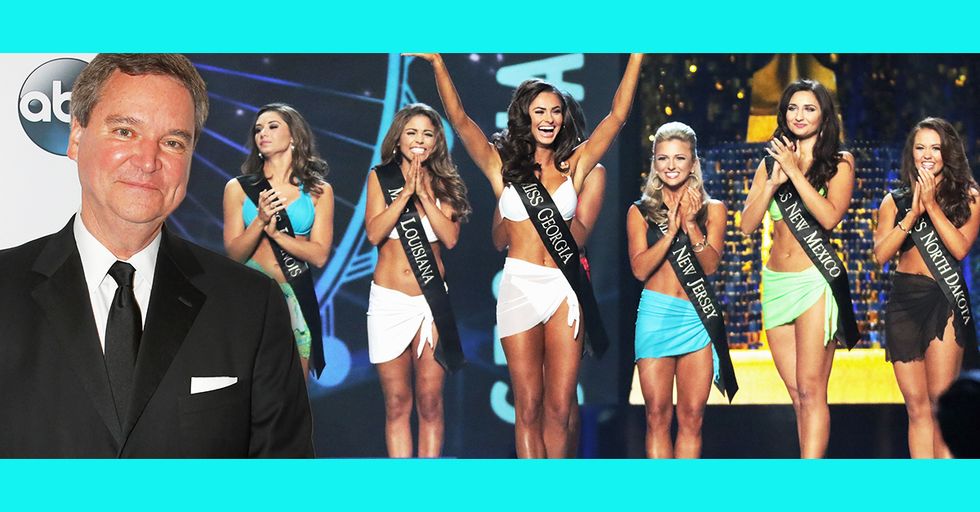 When will 2017 end? No, seriously – when will this misbegotten trash-heap of a dumpster-fire year finally call it quits? If it's not the fact that the world is becoming dangerously warm while we have a climate-change-denying white supremacist for a president, then turn your gaze to North Korea, where all sorts of nuclear shenanigans are happening.

And then of course, there's men.

2017 has been a very tough year for men, who have had to come to terms with the deeply ingrained misogyny that currently plagues America. Many have risen to the task and proven themselves valuable allies. Others have tried to listen and understand. Yet more still have begun the difficult task of evaluating their responsibilities in a culture that systematically allows for the abuse and degradation of women.

Then, of course, there's the guys at the Miss America Organization.

But first, a primer: In October of 2017, Hollywood mega-producer Harvey Weinstein was outed as a serial rapist, abuser, and all around avowed misogynist. He wasn't the only one, however. Within days, a flood of accusations rose against other prominent men like Kevin Spacey, James Toback, Matt Lauer, Brett Ratner, etc.

A documentary about the Harvey Weinstein scandal is in the works https://t.co/DOAC2yKdKp https://t.co/slzoU8BXUc
— HuffPost (@HuffPost)1513636568.0

As per usual, naysayers flooded out the woodwork. "It's a conspiracy," some howled. "Why didn't they come out with this sooner?" It'd didn't take long, however, for people to begin to realize that it wasn't in fact, a conspiracy. For decades these men had preyed on women – and indeed, other men – using their power and influence to keep their accusers from speaking.

For the first time, many in America were confronted by the specter of structural misogyny, which, like its close cousin, structural racism, exists as a series of mechanisms that allow, and at times even encourage abuse, harassment, or outright sexual assault against women.

Just seeing this after I awoke, I burst out crying. There it is, confirmation that Harvey Weinstein derailed my car… https://t.co/D4AkmZuFqC
— Mira Sorvino (@Mira Sorvino)1513351253.0

A perfect example of this was the newly-crowned godfather of misogynists, Harvey Weinstein. Weinstein wielded his money and power with an iron fist and used both to escape censure for decades. He bullied and gaslighted both his assistants and subordinates (both male and female), to the point that many could not see the sexual predation happening under their own nose, and if they did, he tied their hands with a non-disclosure agreement and the threat of lawsuits or career assassination. He made his employees – particularly his assistants – complicit in his actions, even when they did not know what was happening.

His manipulations of his victims were even more horrifying. Weinstein routinely destroyed women's careers through whisper campaigns. If that, for some reason, did not work, he employed the services of actual former Israeli agents and other black ops spies to collect information he could use to destroy his victims. Even worse, he had a network of other misogynistic men – including a former editor at the National Enquirer – who would direct or write hit-pieces that targeted the subjects of Weinstein's ire. As we have learned over these past few months, Weinstein was not alone in his sordid machinations, and now, another organization has unexpectedly been revealed as also being misogynistic to its core – The Miss America Organization.
Yes, you heard that right – "She's beauty and she's grace, she's Miss United States" – that organization which purports to support and elevate women has been revealed being a sexist bog of Weinstein-like proportions – the depths of that bog being CEO Sam Haskall and his frequent collaborator, head writer Lewis Friedman.

Haskell, who has served as the head of the organization for nine years, and originally came Hollywood talent agency William Morris Endeavor (where he served as the worldwide head of television) is widely credited with turning the fortunes of the pageant, which had languished on basic cable before he assumed the mantle of  leadership.
Haskell was seminal in brokering a deal with Hollywood production company Dick Clark Productions (DCP), which assumed the responsibility of funding the pageant in addition for paying for the rights to produce the spectacle. In return, the company received two seats on the organizations board.
Early this year, however, DCP was alerted to a series of emails between Haskell and others that was, in a word, horrifying. The emails dated back for years, and shows, as writer Yashar Ali describes in an article for the Huffington Post, that:

Haskell’s behavior behind closed doors [displays that] he regularly maligned, fat-shamed and slut-shamed the former Miss Americas, calling them shocking names and in one case laughing at the suggestion that one of the women should die.

Many of the emails and texts are between Haskell and former head Miss America writer, Friedman, and the contents are beyond appalling.
In one, Haskell writes, "I have decided that when referring to a woman who was once Miss America, we are no longer going to call them Forever Miss Americas....please change all script copy to reflect that they are Former Miss Americas!" To this, Friedman replies, "I’d already changed “Forevers" to “C*nts." Does that work for you?" Haskell’s reply was short and rage-inducing. "Perfect...bahahaha," he wrote.
Importantly, Haskell did not show this side of himself to everyone. For instance, Haskell despised Miss America 2013, Mallory Hagan, to the point where he fat-shamed her, sullied her reputation, and eventually destroyed (two) of her careers.

But when he and his daughter exchanged emails about her, he was at his utmost professional. As Ali describes:

His daughter, Mary Lane, said, “Here’s hoping you get another good one!"

Haskell replied to Mary Lane, “It’s going to be hard to replace Mallory, but I’m hopeful!"

Head writer, Friedman, was not the only member of the Miss America organization that joined Haskall in his gross misogyny. Another favored sounding board was Tammy Haddad, a "media consultant and D.C. power connector" who served on the Miss America board.
Of the Miss America contestants, Haddad had this to say – they were a "pile of malcontents and has beens who blame the program for not getting them where they think they can go." Haddad further added, "80% of the winners do not have the class, smarts and model for success," and finished by saying, "YOU have to let them go. You don’t need them. They need you. We also have to punish them when they don’t appreciate what we do for them."

Again, without the women who once competed in, and upheld the values of Miss America, there is literally no Miss America organization. Haskall did not seem to understand this, because he had special ire for those Forever Miss Americas he felt did not show enough loyalty, or were not attractive enough to warrant his approval. He wasn't the only one, of course.
In the case of Mallory Hagan, the aforementioned Miss America 2013, head writer Friedman once asked, "Ps. Are we four the only ones not to have fucked Mallory?" This, of course, was when he and the others weren't fatshaming her. Haskell – in reaction to a picture of her: “OMG she is huge...and gross...why does he [Hagan's boyfriend] want that?????"

The most egregious abuses came from Haskell, who convinced Hagan's agent at William Morris Endeavor to drop her, thus ending a burgeoning career and forcing Hagan to move to New York, where she then started a lucrative career as a pageant speech coach.
In response, The Miss America Organization stopped allowing speech coaches, forcing Hagan to move back to Alabama, where she became an evening anchor.

After the pageant organization refused to drop Haskell and his band of misogynistic misfits, Dick Clark Productions resigned from its board and dropped the pageant. As another target of Haskell, Miss America 1989, Gretchen Carlson, states:

Every MAO executive and board member who engaged in such crude behavior and signed off on it like it was no big deal should resign immediately. The Miss America Organization, which is tasked to uphold an almost 100 year old tradition of female empowerment and scholarship, deserves better.

If there's one thing you can take away, it's this. For years, women have been pooh-pooh-ed for having suspicions that they were being pushed out of careers or blackballed. While stories like these are exhausting and disheartening, they're also proof of what women have been saying all along – there are structural biases, and sometimes, they originate from the guys at the very top. You can read the Huffington Post article here.