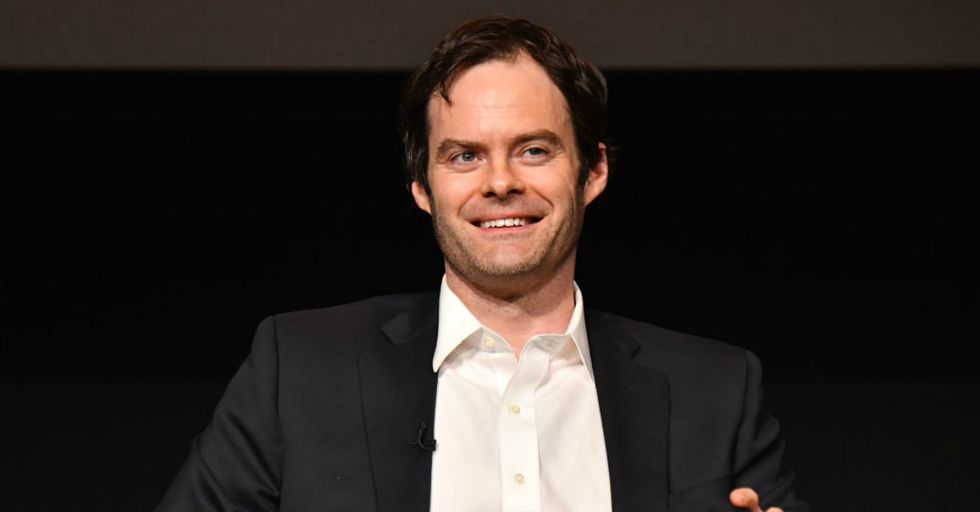 Everybody has a weird celebrity crush. Some of us just aren't willing to admit it.

Honestly, I'm completely obsessed with Rami Malek from Mr. Robot, even if he is delusional and gaunt on TV. I just can't help it. And it looks like someone below agrees with me. Who is your weird celebrity crush that no one else thinks is hot?

But you know what?

There's nothing wrong with finding someone attractive, even if society as a whole doesn't deem that person attractive. What does society know anyway?! A recent AskReddit thread gave people the chance to reveal their conventionally unattractive celebrity crushes. Are there any you can relate to?

Ryan Stiles from 'Whose Line Is It Anyway.' Not unattractive by any means, but also not conventionally attractive. And I think he's sexy as hell. –prettylemontoast

I don’t know if he’s the LEAST attractive person I know of but off the top of my head - Bob Odenkirk. I’ve been in love with him for years. –party_tattoos

Bill Hader. He's incredibly talented, but his corpsing on SNL is probably what made me fall in love with him. In my fantasy, he's dirty-talking to me in his Herb Welch voice. –MyButtNeedsAttention

Alan Rickman. I don't even care, fight me. (When he was alive you bunch of sickos.) –snowbunny724 This next one is a little spooky!

Till Lindemann, frontman of Rammstein. He's older, scarred, and has sad bulldog eyes, but for some reason, he just does it for me. –bbreland

Idk if I was just tired after work but watching Castle Rock I went from getting a little spooked just by seeing Bill Skårsgard to being like “oh OK, I see you, you tall drink of terrifying water." –gnarlyrae_jepsen

I feel like every other time I see Lady Gaga she's shifted from attractive to unattractive and back again. She's a boner enigma. –FuzzyElf47 This next one is...surprising.

Lorde has a spooky, kind of alien-looking face and vibe to her, but the kind of uncanniness just makes her infinitely more attractive somehow. –Tutwater

I can’t believe nobody has said Lip from shameless yet. Jeremy Allen White is a weird-lookin' dude but holy sh*t he does something for me. –notwhatyouthinkat32

I’ve had a crush on Rob Corddry since I was 15 and he was on the Daily Show. I still find him very attractive. –romero0705

Eric Andre. Everyone tells me he’s ugly as hell but I love me an ugly boy. –Bronx13 You might relate to this next one. Then again, you might not.

My 70-year-old metaphysics professor. He was not attractive by any means but boy was I attracted to him. –kamero90

My sister says Matthew Gray Gubler is super weird looking. But I think he’s so dang cute/hot. –_rotting_peach_ This next one is pretty out there.

As a straight guy, I can say with confidence that Willem Dafoe is an extremely attractive dude.

His face looks like it's bound in 60-year-old leather, but the guy just oozes charm and charisma. –HoboRisky

Ron Perlman has a face that looks like it's been lived in by about four previous owners, but good grief I think he's hot. –hadesalmighty

John C. Reilly is the utmost of ugly sexy to me. Can't explain why. –H8erRaider

Tilda Swinton. Her bone structure is both captivating and sort of severe, and her eyes can be either dark and chilling or mesmerizing and almost warm and overall I just find her fascinating to look at, like a dreamy but alarming surrealist painting. –CogDiss88

Chelsea Peretti is up there for sure. Not sure if this fits perfectly but she is VERY attractive even though some people really are not a fan. –UBsamsongs This next one I actually kinda get.

Mads Mikkelsen. Didn’t see how attractive he was until watching Hannibal. –mrsfeathers7

Jack Black... oh man Jack Black. He is just charismatic and funny and I have a HUGE crush. In the Holiday while everyone was drooling over Jude Law I'm over here like.. but he just cheated on his fiance in real life.. and Jack Black is the nice guy next door...who I want to do dirty, dirty things to me, then write a song about it. –its_beatrice_bitches

Benedict Cumberbatch. He looks like a celery but there’s something about him. –Andlenz

Steve Buscemi. Personality counts. –Spo-dee-O-dee Have your own questionable celebrity crush? Let us know in the comments! And don't forget to share this with someone who has a weird celebrity crush.