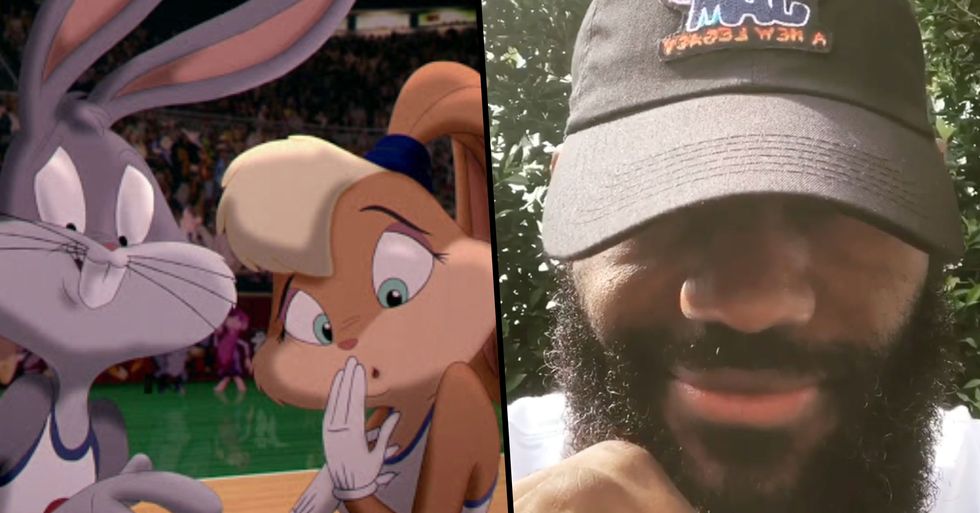 LeBron James Announces 'Space Jam 2' Is Coming out in 2021

After years of rumors, it has finally been revealed that Space Jam 2 will be hitting the big screens sooner than we thought, and with all that's gone on over the last few months, it's the news we all needed to hear...

LeBron James has taken to Instagram to share the news and even leaked the possible logo for the sequel, keep scrolling to find out more...

More than two decades after Space Jam opened at the top of the U.S box office, it's finally getting a sequel!

And it's exactly what we all need right now.

It's bound to have been a while since you delved into the world of Looney Tunes...

So here's a little recap of why we love this quirky sports comedy...

As we all know, the film presents a fictionalized account of what happened between Michael Jordan's initial retirement from the NBA in 1993 and his comeback in 1995.

In which he is enlisted by the Looney Tunes to help them win their freedom in a basketball match against the Monstars.

Working for Mr. Swackhammer, the Monstars are helping the ruthless owner of the intergalactic amusement park Moron Mountain...

To enslave the Looney Tunes as his newest attractions.

It's all pretty serious stuff.

The movie is overflowing with hidden easter eggs that you probably didn't notice, even if you've watched it more than you'd like to admit. Here are some little known facts about the movie...

This commercial is actually what started it all off...

Airing in 1993, this was the inspiration for Space Jam.

The producers of the movie built a gym just for Jordan.

The “Jordan Dome," was created just for him to practice his moves. I mean, it's not like he was a professional basketball player or anything.

The Schlesinger Gym is where the Toon Squad holds tryouts, which is a nice little shoutout to Leon Schlesinger...

He founded the studio that would go on to become Warner Bros. Cartoons and produced some of the very first Looney Tunes cartoons.

The soundtrack for the movie is so ’90s it hurts.

Featuring musicians like; Seal, Coolio, Monica, and R. Kelly with: “I Believe I Can Fly," which won three Grammys! What a time to be alive.

That moment when you grow up and realize Frank from It’s Always Sunny in Philadelphia is Swackhammer.

Danni DeVito can do no wrong. We can only hope he makes another appearance in the sequel.

Despite the audience's reactions, the critics weren't bowled over by the movie.

Space Jam only has a 37% score on Rotten Tomatoes. I'm so embarrassed for the critics and their lack of taste.
— millennihilist (@millennihilist)1502492118.0

The only critic who gave a good review - therefore the only review that matters - was Roger Ebert, who gave the movie 3.5 out of 4 stars and said Space Jam was “a happy marriage of good ideas."

But that didn't halt the success of the movie...

While critics were blind to the pure genius of the movie, audiences were (and still are) lovers of Space Jam, which is still the highest-grossing basketball movie of all time!

Above that, it’s the twelfth highest-grossing sports movie ever...

And when it came to merchandise, they pulled out all the stops...

One of the movies best sellers was a mini bust of Michael Jordan’s head filled with candy... If this isn't for sale when the new movie releases, they've missed a trick.

Where he had to wear his North Carolina college shorts under his kit every game? Well, it was real... and probably pretty uncomfortable.

Wayne Knight gave an unforgettable performance as Stan Podolak, but guess who turned down this once in a lifetime role...

Michael J. Fox, Chevy Chase, and, Jason Alexander. That would have turned Space Jam into a completely different movie!

There isn't a person on the planet who didn't want a pair of the Air Jordan XI Space Jam sneakers, that MJ wears in the movie.

Although they were re-released in 2016 for the 20th anniversary, they're pretty hard to get hold of now.

There have been rumors of a sequel swirling about for years, but it’s finally been officially announced.

LeBron James took to Instagram last night to tease fans with the news that Space Jam 2 is set for release next year!

Film releases have faced some uncertainty due to the recent pandemic.

So the post was definitely what we needed right now, giving us a little bit of excitement, even if it is a year away.

When James posted the brief clip out to his 63.6 million followers, it led to speculation over the title for the sequel.

The hat he is wearing reads: "Space Jam: A New Legacy" and people think he's also given away the logo for the film. Replying to the Instagram post, one fan wrote: "We just have to get through this year and 2021 will be great," while another added: "Dreams do come true." A third asked: "Push up the date a lil bit I'm bored."

Earlier this year, Nike revealed the uniforms that the Tune Squad and Monstars will be wearing for the sequel...

No one knows if the plot will deviate from the original, but with the new uniforms revealed, we can assume that a basketball game will be taking place... spoilers.

And the cast is looking pretty well thought out, with the likes of Anthony Davis, Damian Lillard, Klay Thompson, Chris Paul, and Diana Taurasi.

Don Cheadle is another cast member confirmed for the sequel, but frustratingly the man who played War Machine won't let up on keeping his role a secret, saying: "No, I'm not playing myself. I actually can't tell you what I'm playing."

Filming had already started last summer with reports that the cast and crew would begin shooting in June 2019.

Many speculated a time frame, but we finally have definitive proof that the movie is set to release July 16, 2021. We can't wait to see what the players get up to this time... Keep scrolling for the secret Netflix codes allowing you to unlock hidden movies, that are bound to tide you over till the sequel comes out...