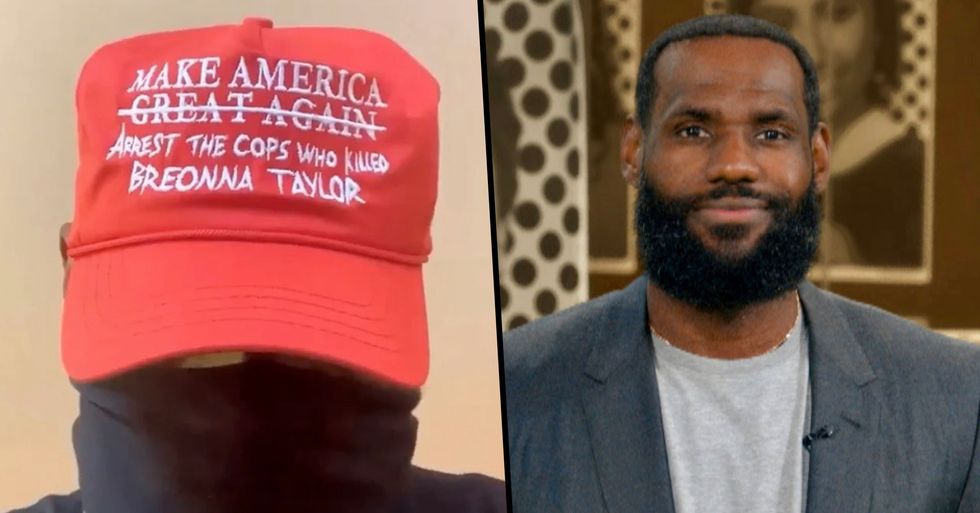 LeBron James made a powerful statement before his playoff game yesterday, and he was far from the only one...

LeBron James took to the basketball court on Tuesday night.

But, his first playoff game of the season was a little different from the rest.

Because the star made a powerful statement with his wardrobe.

Like many other celebrities, the NBA superstar has vowed to call for justice for Breonna Taylor.

And his latest stance has certainly made an impact.

When 3 police officers shot her 8 times in her own home.

A happy and proud woman who worked as an emergency medical professional.

But there's one thing that made her stand out from us.

She was a Black woman.

In the most bittersweet form, she only received the love she deserved after her death.

A woman who put her life on the line every single day to help others in a profession that aids this country massively, could only receive the respect she deserved after she was brutally murdered.

Maybe the police officers would have thought twice about it if they could see her badge.

But all they saw was Black. And that's all it took for them to fire more than twenty rounds, 8 of them tearing through Breonna's flesh.

It all started in the early hours of March 13th.

That was the morning when 3 plain-clothed police officers broke into Breonna's home while she was asleep in her apartment in Louisville, Kentucky. Her boyfriend, Kenneth Walker, was asleep peacefully next to her.

But he was woken up by what he thought was a violent break-in.

The officers had allegedly received a tip-off that they were going to be involved in a drug raid, so executed a "no-knock" search warrant which involved breaking into their home.

Without announcing their arrival, Walker believed a home invasion was taking place.

So with a fully registered gun in his hand, he shot at one of the officer's legs and that led to a barrage of bullets firing at both Walker and Taylor who was immediately killed. They had the wrong house.

However, the charges were dropped after further investigation conveyed negligence on behalf of the police officers.

The officers even claimed that they did announce their arrival.

But Breonna's family and a neighbor rejected those claims stating they were false as no shouts were heard until the door had been broken down and the shots were fired.

Rather than opening an investigation into the fatal incident...

The Louisville Police Department disregarded the case as nothing but a mistake, and none of the officers faced any sort of consequences for their actions.

This careless behavior has been happening for decades.

2 months after her death, Breonna's family filed a lawsuit.

On May 21st, over 2 months after Breonna had died, her family took action. Breonna's name started circulating all across social media in yet another #SayHerName campaign which helped them find the confidence to file a wrongful death lawsuit.

Louisville's city council voted unanimously, 26-0, in favor of banning the controversial law and re-named it in honor of Breonna. Her mother said it would "help save lives" the way her daughter intended to do as she was studying to be a qualified nurse.

Just over 100 days after she was killed, one of the officers, Hankison, was officially fired from his position.

But the other 2 are still on administrative leave.

Several celebrities are now using their platforms to speak up and bring her justice.

The star was spotted wearing a fake MAGA hat before Tuesday's game.

The MAGA slogan is scrawled out with "Make America Arrest The Cops Who Killed Breonna Taylor," written underneath.

And LeBron was far from the only NBA star taking a stand...

The entire Lakers team were demanding justice, from Dwight Howard to Anthony Davis to Alex Caruso wearing the hats prior to yesterday's game.

Talk about making a statement.

If you want to learn more about why the Black Lives Matter movement is so important, scroll on...