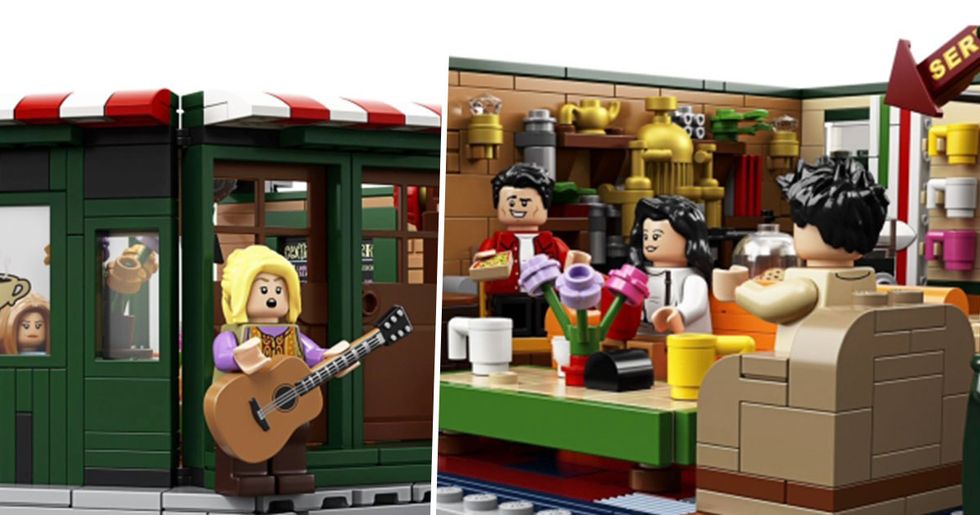 "I'll be there for you," they said, "when the rain starts to pour," they said.

This promise was reiterated to us week in week out by the TV show and, because we're all gullible fools, we believed it. Well, there has been plenty of rain since that fateful evening of May 6th, 2004, when Friends ended and we had no more new episodes to look forward to.

Just like that, cya later - Jenifer Aniston has been off making plenty of movies with Adam Sandler, or is Ben Stiller? They both look the same to me... Courtney Cox did Cougar Town, Matthew Perry played Zak Efron (if you know, you know...). David Schwimmer was an animated giraffe and then Kim K's dad. And Lisa Kurdow's... been around, hasn't she? Matt Le Blanc had that unsuccessful Joey spin-off and most recently took over Top Gear (ugh) but I think he's finished with that now...

But, whatever they've been up to, what they haven't been up to is returning to their orange couch-shaped thrones at Central Perk.

I wish that I could tell you that, to mark the show's 25th Anniversary, the cast have reunited, but that would only be half true. Well, in a way,  the cast have reunited. Only it's in LEGO form. That's right! LEGO has teamed up with whoever owns the Friends franchise and has decided to bring out a Friends set!

Would you look at that...

I think that LEGO have done themselves proud with this latest set. Talking about the collection, Lego has teased: "The one with LEGO bricks. Coming soon." Genius.

I think that we can all appreciate @bread_Walsh's reply: "the true f.r.i.e.n.d.s were the ones we built along the way."

So, who features in the collection?

Matthew Perry sure sounds like he would be interested in getting this LEGO edition... But, before I invest in this product, I want to make sure that it's going to include the whole cast! I mean, not everyone. Obviously, I can do without Janice and that old guy that Monica was with for ages... Richard! That was it. Yeah, there's no need for a LEGO Richard.

When I first glanced at this, I thought, "why is Rachel dressed like a cowboy?" - then I realized that it wasn't a cowboy hat, but a tray with a coffee cup, in her hands. As for the general cowboy-ness of her outfit, that was just the '90s wasn't it? Can you appreciate how difficult it must have been for LEGO to get that famous Jenifer Aniston hair right? Fair play to them, I think that this is a pretty realistic portrayal.

Everyone's favorite paleontologist also features in the LEGO collection. And he looks as though he's come straight from the museum. Tan blazer, striped green tie, and hair with enough gel in it that the LEGO version looks strikingly similar to how it looked in the show.

No Central Perk scene would be completed without Phoebe and her guitar perched in the corner, ready to do a rendition of "Smelly Cat." As the carefree, hippyish one in the group, Phoebe's, LEGO character does do her justice. I wonder if you can swap the heads around... it'd be fun to stick Chandler's head on Phoebe's body...

Looks as though LEGO Chandler has just come from the office, too. What was it he did again? (Get it?) Anyway, looks as though LEGO decided to go with vintage, floppy-haired Chandler rather than the short-back-and-sides Mr. Bing that we saw in later seasons.

Monica dressed as a builder? No, again, just like with Cowboy Rachel, if you look closely, you can see that Monica is not dressed as a builder - '90s fashion remember? Plenty of people pulled off braces back then - people even tried to bring them back in the '00s, but not with the same success - somehow it didn't quite have the same charm. And that blob in her hand? Some kind of souffle, chocolate treat? Monica Geller was a chef remember! You can use your imagination to decide what she's holding. The joy of LEGO, eh!

LEGO Joey has somehow managed to smuggle a slice of pizza into Central Perk - Italian heritage privilege, maybe? Well, I mean, Monica brought in a souffle, so maybe anything goes when Rachel's on shift! Are you getting as excited as me to play LEGO Friends?

Even Gunther made the set!

What would Central Perk be without Gunther? I once spent a long time on a Reddit thread that shared theories about Gunther - some of them were darker than others. One theory was that Gunther always reserved that perfect spot for Rachel and her friends, which would explain why no one else ever sat there! Aw, Gunther, what a guy.

When can I get my hands on the Friends LEGO set?

Well, although Lego has been vague so far and hasn't actually given an exact date of release, going under the assumption that it will be in line with the show's 25th anniversary, we can wager that it will be around September 22nd. Mark it in your diaries, folks! - or, I mean, put a reminder in your phone... we're not in the '90s anymore. If you were ever in any doubt about how LEGO could fit into your adult home, doubt no more. Continue scrolling to discover loads of creative and practical ways to use LEGO around the house.