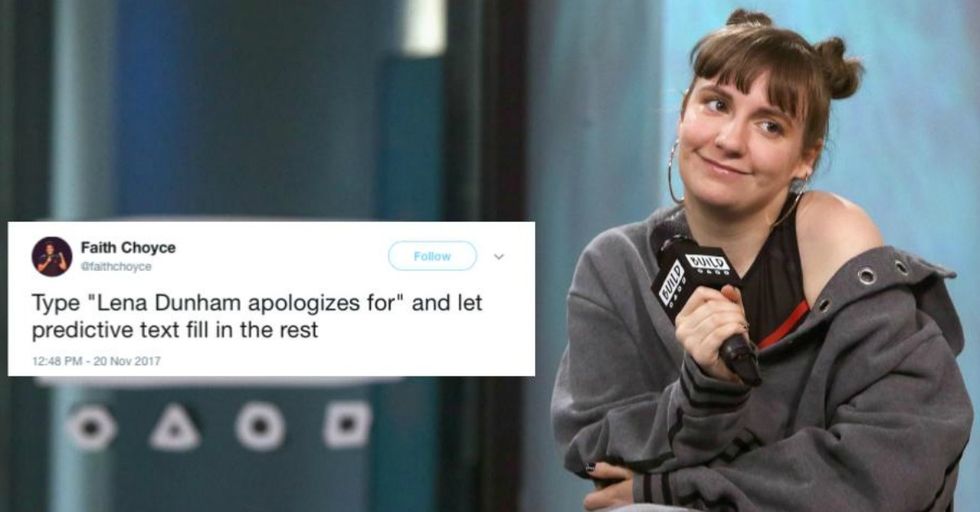 Last week, actress Aurora Perrineau, who has appeared in such movies as Passengers, Jem and the Holograms, and the upcoming Blumhouse horror Truth or Dare, went to the police to accuse Girls writer Murray Miller of rape. The actress, who is now 23, accused Miller of forcibly penetrating her when she was 17.

She made a statement for a polygraph test she passed in September, which was acquired by The Wrap.

In the statement, Perrineau says she met Miller at the Standard Hotel.

She was out with two friends, and had been drinking. “He was flirting with me. I told him repeatedly that I was 17 years old," Perrineau said. Miller was 35 at the time. Miller asked one of Perrineau's friends for a ride home because he was drunk, and the group agreed to take him home.

Once they arrived, everyone went to Miller's home. Perrineau says she did not want to go in, but felt pressured because everyone else was. Then things took a turn for the worse.

Is it just an ugly coincidence that the first woman Lena disbelieves is an actress of color? https://t.co/QwvpcCG0LN
— Mindy Benson (@Mindy Benson)1510967270.0

"At some point, I woke up in Murray’s bed naked. He was on top of me having sexual intercourse with me. At no time did I consent to any sexual contact with Murray," Perrineau said.

Miller denied the claims via his attorney.

In a joint statement with her co-showrunner, Jenni Konner, Dunham implied that Perrineau was a liar:

While our first instinct is to listen to every woman’s story, our insider knowledge of Murray’s situation makes us confident that sadly this accusation is one of the 3% of assault cases that are misreported every year. It is a true shame to add to that number, as outside of Hollywood women still struggle to be believed.

Keep in mind, this was the same Lena Dunham who has called for people to believe women.

Even up until a couple of weeks ago, Dunham was still all for supporting women.

When the Weinstein scandal unfolded, Dunham quickly reached out to Italian actress Asia Argentina, one of Weinstein's primary accusers.

Argentino wasn't the only person incensed by Dunham's 180 turn. People were quick to call her out.

Many noted that Perrineau's race might have something to do with Dunham's change of mind. Perrineau is half-black, the daughter of Lost actor Harold Perrineau. As the Weinstein scandal and its fallout unfolds, it has not slipped people's minds that the in particular, it's been women of color's accusations that have been questioned.

In fact, of all of Weinstein's victims, the only one he made a statement about not assaulting was Lupita Nyong'o.

The difference between Lupita and all the 79 other actresses he is accused of assaulting is that she's black. As historian Deborah Grey White stated, "Historically, African-American women have been perceived as promiscuous... Black women’s bodies, from Day One, have been available to all men." So Dunham was playing into a horrendous stereotype.

Faced with aggressive backlash, Dunham tried to back peddle, but the damage was already done.

As Essence magazine states, "Dunham’s discrediting of Perrineau is an example of how women of color who have made accusations of sexual assault are often contradicted and never believed."

After all, she's apologized so many times before, but never seems to actually learn her lesson. Lenny Letter writer Zinzi Clemmons, who went to school with Dunham, has a theory about that. She went to college with Dunham.

In a blistering statement, Clemmons noted Dunham has had a pattern since college.

Clemmons stated in a Facebook post that Dunham and her (all white) friends at Brown University were known for “their well-known racism... I’d call their strain ‘hipster racism,’ which typically uses sarcasm as a cover, and in the end, it looks a lot like gaslighting—‘It’s just a joke. Why are you overreacting?’" In the end, Clemmons concluded, "It is time for women of color—black women in particular—to divest from Lena Dunham." Indeed.