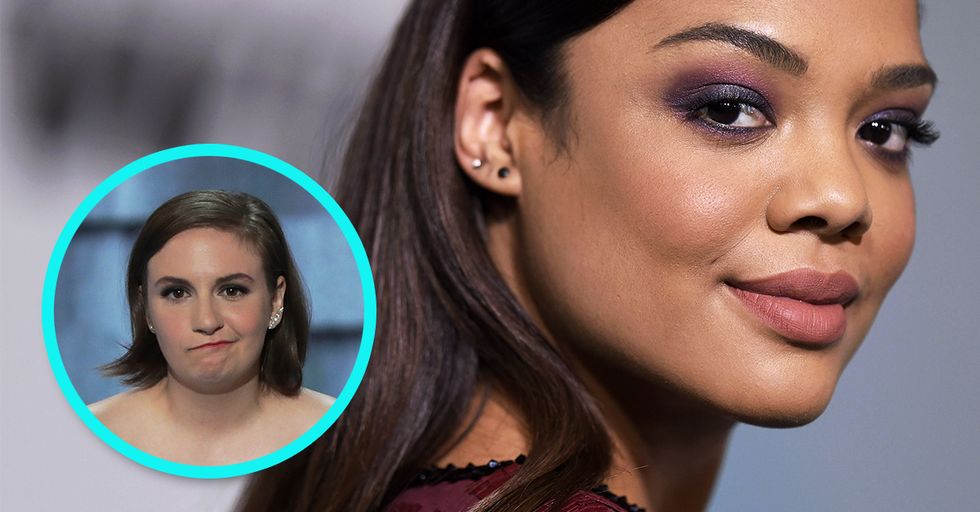 Another year, another Lena Dunham scandal. This time, everyone's favorite self-proclaimed feminist has tried to hitch her wagon to the Time's Up star... without doing any of the work the other activists are doing.

So. Let's get down to it. The issue here is performative feminism.
This means feminism that looks and acts like feminism – it wears pussy hats  and logo-ed t-shirts and fights for women's rights – but actually isn't. After all, feminism is a very basic construct – equal rights for women and men.
Many would accuse feminists of seeking to take rights away from men, but that isn't the case. All feminists seek is a seat at the table. To be afforded equal consideration for both sexes. Part of this also takes into consideration complicating factors like race, sexual orientation, religion, etc. This is called intersectionality.
So when we talk about feminism that isn't intersectional – that doesn't take into consideration these factors and pushes for the equality of only white, abled, heterosexual women – that is what we mean when we say white feminism.

As you will recall, the habitual bad feminist had a bit of a rocky 2017 when she exposed herself in all her white feminist leanings as she defended one of her writers when he was accused of rape by mixed race actress Aurora Perrineau.
This, of course, was mere months after she had exhorted the world to "believe women" via one of her favorite social media mediums – Twitter.

Just like that, Lena Dunham was finally cancelled, with a writer from her Lenny Letter staff calling her a "hipster racist."
That was 2017, and this is 2018, and now Dunham has yet again emerged to cause another social media brouhaha. This time it was tied to the Time's Up movement, which seeks to end sexual harassment and gender inequality in the workplace.

This week, Dunham appeared on a now-deleted Time's Up group picture on Thor: Ragnarok actress Tessa Thompson's Instagram. This was a surprise to many followers of the campaign, who hadn't seen her in the previous months of work.
One user stated:

I support this initiative and the fight for gender justice and am really glad that the movement is growing. I however am perplexed by the inclusion of Lena Dunham, a woman who publicly accused a young sexual assault survivor of color, Aurora Perrineau, of lying about her assault.

True to form, Thompson stepped in with a candid reply:

Lena was not anywhere present in our group during the countless hours of work for the last two months. We hosted an open house for actresses for red carpet messaging and Lena presence was a surprise to us all. This is a time of reckoning. And for many, a re-education. So many women also have real work to do. I’m afraid it’s too nuanced a conversation to have on this platform. But I hear you, and know that your thoughts and words are not lost on me. It’s been discussed.

For reference, this is a woman who, when presented with this tweet–

–about working with Woody Allen, had this to say:

Anyways... “Would I work with him?" is a highly hypothetical question for me. There are no black women in Woody’s worlds.

I was honored to be invited to the meeting by a close friend and to observe the work that these amazing women have been doing the past few months. For highly personal reasons, I’ve been unable to join previous efforts but being asked to be a part of this celebratory moment was truly beautiful. I’ve worked with Tessa and respect her artistry and admire her consistent candor.

And Thompson put out an explanation as well via Twitter, saying,

I sometimes lack finesse in navigating social media. Hard to discuss issues with nuance there. A response I made to comments on an Instagram became fodder for a piece that I believe was designed to create conflict where there isn’t any.

Tessa can't say it so I will: Lena Dunham's so called contributions are worthless. She's a rape apologist who has n… https://t.co/tYFOdCsoKt
— Kayleigh Donaldson (@Kayleigh Donaldson)1515497626.0

All's well that ends well, we guess, but Lena Dunham still needs to take time to brush up on her feminism before she tries something like this again. Just sayin.