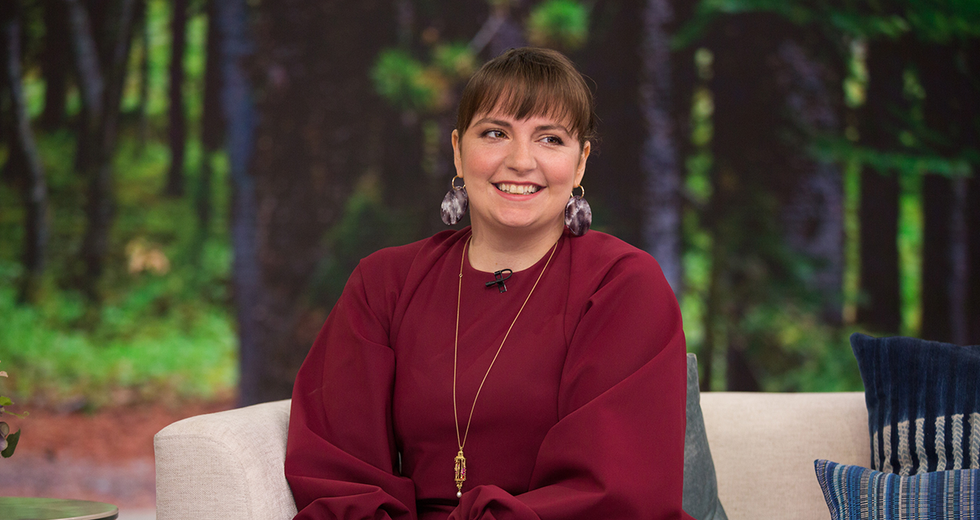 Lena Dunham just bared it all on Instagram in the name of body positivity and encouraging a “love yourself” attitude. The actress/writer/producer took to social media to share a photo of herself sunbathing in the nude.

“Any negativity that comes your way is just an excuse to love yourself even more, right?" Dunham wrote in the photo caption. She also added that the comment section was open for people to share reasons that they love themselves, all for a good cause. For every person that replied with a positive comment about themselves, Dunham donated one dollar to Friendly House LA, an organization that helps women to recover from substance abuse disorders.

Dunham wrote, “Comment below with a reason you love yourself. I’ll go first: I’m a sober accountable adult who still loves to get naked.” And many people did, including some celebrities.

Since posting her encouraging body positivity post, there have been more than 25,000 comments which means that Dunham has raised a large amount of money towards her favorite non-profit organization. Seeing Dunham’s pic is not only encouraging for so many people that deal with body issues, it’s also amazing to read how people are loving themselves and encouraging others to do the same.

Actress, writer, and producer, Lena Dunham, is no stranger to a great deal of social media attention.

She’s received plenty of criticism for things that she has said on social media and in interviews in the past.

Along with the controversies, which is something that most celebrities deal with, Dunham uses her voice and fame for charitable causes.

We all love a celebrity that uses their fame for good.

Dunham recently bared it all on Instagram and asked her fans to love themselves.

The Girls star shared her photo with an empowering message about body positivity.

“Any negativity that comes your way is just an excuse to love yourself even more, right?" she wrote.

She’s right. With all of the self-criticism that we force upon ourselves, we should take moments to acknowledge all of the positive things about us.

It’s especially refreshing to see a celebrity share a picture of themselves even though their body isn’t the typical beauty standard that is so often impressed into us by the media.

Dunham has always been a fierce advocate for changing the way that we view bodies; we should acknowledge the beauty in all of our imperfections.

Dunham herself has had her own body issues, which is why she’s so outspoken about it.

There is an undeniable bias about women’s bodies, but the truth is that we are not all model-perfect, which is exactly what Dunham expresses.

Throughout her show, Girls, that aired on HBO, Dunham appeared nude numerous times.

I admit that I was shocked the first time I saw her nude on screen. But that’s because I was not used to seeing a full-figured nude woman on TV. So my feelings immediately went to “OMG, I love her for this!" because there was finally someone breaking the mold of Hollywood beauty standards.

Dunham is clearly trying to get us all thinking about beauty differently.

And, most importantly, trying to encourage us to be comfortable in our own skin.

Because we’ve all struggled with body issues.

A lot of it has come from our perception of what beauty is, which we've been conditioned to think is what's on covers of most magazines.

Dunham is doing amazing things and has become an inspiration to many people.

Dunham is loving herself.

We’ve all seen this from Dunham at some point, and now she’s fiercely exuding this love in the direction of everyone else.

Not only is she expressing herself through photos, she’s also doing it through her art.

Her artwork is actually really good!

Dunham shares her artwork on Instagram and says that one of her favorite subjects are “complicated women".

Some of her art includes portraits of Mariah Carey, Mia Farrow, and Kate Moss.

Here, Dunham said that she created a painting of “inner Me"

Dunham also recently celebrated her one year of sobriety.

That’s an accomplishment that she and all of her loved-ones should be very proud of.

It’s also an important part of the “love yourself" motto that Dunham is campaigning for.

Because positivity starts with sobriety.

She also works to bring awareness to endometriosis since she herself has had surgeries to remove her ovaries because of the pain and complications from the incurable disease.

According to womenshealth.gov, more than 11% of American women between the ages of eleven and forty-four can be affected by endometriosis.

As part of her healing process and her mission to bring awareness to endometriosis, Dunham shares photos of her surgery scars.

The message that she conveys is that every scar on your body should be loved.

Dunham has created something of a little love fest through her Instagram posts and with her recent picture of herself in the nude, many people are also sharing the reason that they love themselves.

“Any negativity that comes your way is just an excuse to love yourself even more, right?" Dunham wrote.

“Comment below with a reason you love yourself. I’ll go first: I’m a sober accountable adult who still loves to get naked," Dunham wrote on her nude sunbathing photo.

She carefully posed so as to not expose too much since Instagram has community guidelines against nudity.

Her fans loved the photo and praised her for being real and honest. Dunham has had a long journey towards self-love and she’s now helping so many do the same.

In her photo caption, she also wrote that she would donate one dollar for every comment to Friendly House LA.

There are more than 28,000 comments on the photo, so her campaign has raised a lot of money for an amazing cause.

Dunham also hosted a Spring fundraiser for the organization.

The comment section is alive with beautiful, positive messages from thousands of people, including a few celebrities.

The picture has prompted some of the nicest comments that I’ve read on social media in a long time.

“I try to love unabashedly even though I’ve had my heart broken more than I can count," Retta wrote in reply to Dunham's "love yourself" post.

American model, Tess Holliday, who is also someone that has smashed all sorts of beauty standards, also got in on the love-fest.

“I love myself because it’s the greatest live I’ve ever known. I love my soft body, tender heart, and resilient and courage to keep going," Holliday commented on the post.

Actress, Kathy Najimy, best known for her roles in Sister Act and Hocus Pocus, left a comment about loving her surgery scar.

“I looove my 12in. back surgery scar," Najimy commented.

Dunham posted some of her favorite comments on her Instagram story.

Just reading through these will give you an amazing jolt of inspiration.

The post is headed to becoming a successful fundraiser for Dunham.

Something tells me that we’re going to see more like this from Dunham and I’m absolutely here for it.

Do it. It will be a great start to your day.