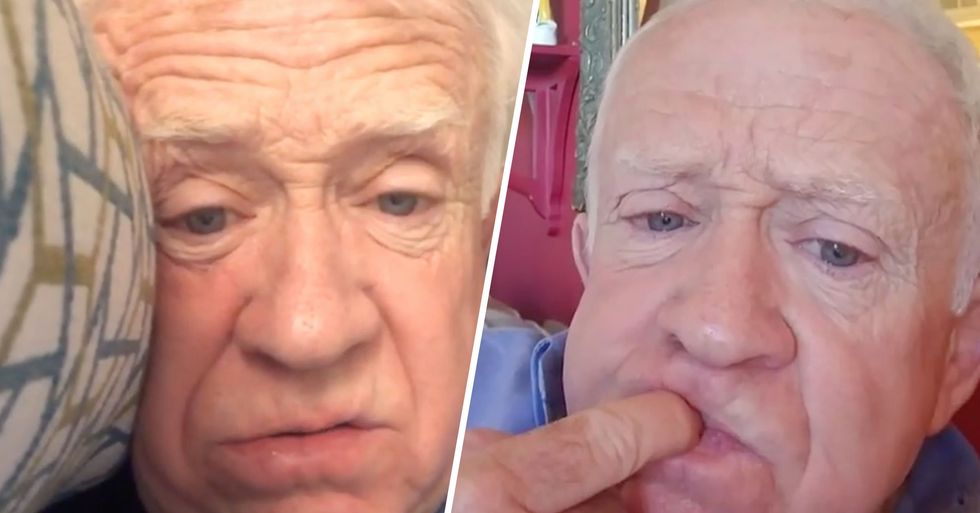 Amid the ongoing medical pandemic, Tennessee-born actor, Leslie Jordan, has been lifting the spirits of millions of people around the world with his hilariously crude Instagram lockdown videos.

Keep scrolling for the full story, and to see his amusing videos for yourself...

Leslie Jordan is the lockdown antidote none of us knew we needed.

During this ongoing medical pandemic, we all need a little bit of humor to lift our spirits while we sit idly in self-isolation.

And Leslie is giving us just that.

The sixty-four-year-old actor has been taking to Instagram during the lockdown and delighting his fans with his hilariously honest updates on his days in self-isolation.

But, before this lockdown, Leslie wasn't too well known for his social media antics.

The actor is perhaps most popular for his roles in various TV shows, such as Will & Grace and American Horror Story.

Oh, and his charmingly drawling Tennesse accent, of course.

Leslie famously reigns from the South, and was raised in a highly conservative, deeply religious atmosphere in Chattanooga, Tennessee.

Leslie, who has been one of the more prominent voices in the LGBTQ community, struggled with this type of upbringing.

In an interview where he discussed his role in the movie, Southern Baptist Sissies, Leslie recalled: "I really wanted to be a really good Christian, like some of the boys in the movie. I was baptized fourteen times. Every time the preacher would say, 'Come forward, sinners,' I’d say “Oooh, I was out in the woods with that boy, I better go forward.'"

In 1982, Leslie decided to leave the South to pursue a career in showbiz.

He made the big move to Los Angeles but picked up some disastrous alcohol and drug issues in the process.

Thankfully, Leslie was able to overcome these demons.

The actor has now been sober since 1997, and the last few decades has seen him achieve tremendous success in the world of acting and stand-up comedy.

He even bagged himself an Emmy Award back in 2006.

His portrayal of Karen's pretentious, sexually ambiguous rival, Beverly Leslie in Will & Grace landed the actor an Emmy for Best Guest Actor in a Comedy Series.

This small town country boy hasn't done too badly for himself.

And now, his fans are loving him for something other than his on-screen personas...

They're loving him for his very real social media presence.

For those of you who didn't know...

And he is using it spectacularly during this ongoing medical pandemic.

As the notorious virus brings the globe to a standstill, millions of us have been forced to quarantine in our own homes... Including Leslie.

Now, Leslie's Instagram has always been a platform for his general musings and story-telling...

But, during the lockdown, it is now dedicated to his self-isolation antics and woes.

To grab everyone’s attention, Leslie filmed himself retelling an article he read about medical advice for intimacy amid the coronavirus. He captioned the video, “Sex during pandemic."

“What are y’all doing? Screwing?" he asked his followers with a laugh. “There was an article in the New York Times about all the rules for sex during the pandemic…I feel like y’all are out of there screwing."

Leslie continued to host his "pillow-talk" sessions, and also filmed himself learning various dances and even discussed his efforts at learning Spanish during the lockdown. Spoiler: They're all hilarious, and not to be taken seriously.

And then there was the one we could all relate to.

Slumped hopelessly on the couch, a fed-up-looking Leslie ponders to his followers: "Well s***. What're you all doing? This is awful! It's still March! How many days in March? When will April just f****** get here?"

Then, upon hearing his mom upstairs, he abruptly sits up and exclaims:

"My mother, hollering at me up the steps, asking me who I'm talking to." He then bellows: "I'm talkin' to my friends! Quit bothering me!" Before turning back to the camera to say wearily, "I don't know how much more of this I can take!"

He even unashamedly documented himself watching "adult" movies with his breakfast...

Taking a bite into his sandwich and looking shiftily into the camera, he challenges his followers: "Oh don't you dare judge me! Ya'll out there doing it... I can at least watch it."

He had some observations to point out regarding the adult entertainers, noting that "they're very limber" while cocking his head to a side and hashtagging #gaypornisbetter.

Leslie has now surpassed a million followers thanks to his videos.

In which he said: “Nothing really changed, I’m still just sitting here watching murder programs. But you may wonder why I’ve got sunglasses and a little suit on because that’s the way that people dress who have one million Instagram followers."

Thank you for being the lockdown inspiration for us all. For more on what other celebrities are doing during the lockdown, keep scrolling to read about the famous faces reading bedtime stories to ease anxiety in self-isolated children...