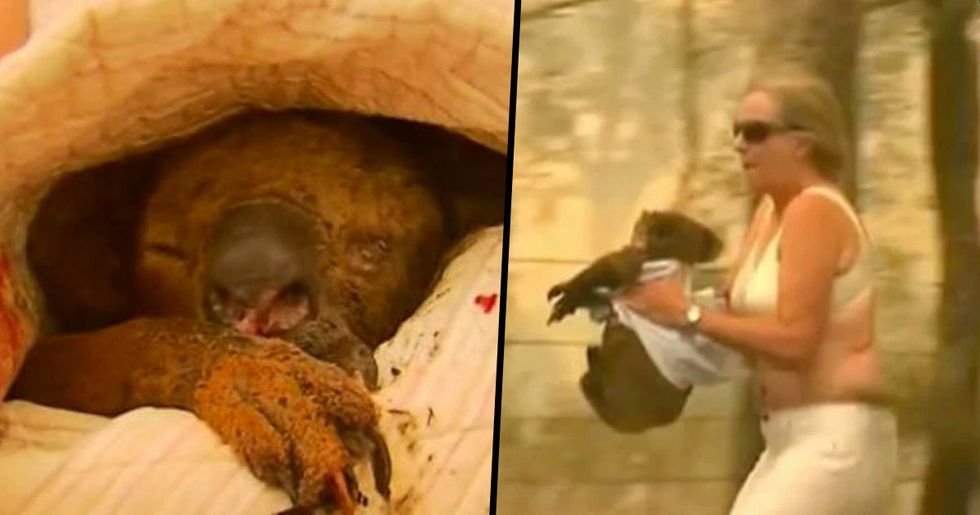 Lewis the Koala Rescued From Australian Bushfire Has Sadly Died

Ellenborough Lewis the koala captured the hearts of the nation when a video of him being rescued from a flame engulfed tree went viral. The little koala was just seconds away from death, when a woman, known only as Toni, ran to his aid using the clothes off her own back to wrap him up.

People across the globe have been closely following his recovery, but it seems there's been some devasting news. The hospital has announced that Lewis has sadly passed away.

4 people have been confirmed to have died in the fires since they ignited...

As many as 350 koala bears have died, with an approximate 75% of the fireground footprint said to have encroached on prime koala habitat.

One selfless woman along with an adorable koala named Lewis became an internet sensation when a video went viral...

Toni Doherty, a local to the New South Wales state, fearlessly ran into a bush fire at the aid of the helpless koala bear.

He was clearly very confused as to what is going on around him, and his vulnerability was very apparent.

The little koala is could then be seen stumbling through the burning forest...

It was truly devastating to watch, but help was soon on its way.

She took off her t-shirt and used it to wrap up the frightened animal. She then rushes off to give the koala plenty of water.

The koala was extremely dehydrated and his fur was matted from the heat...

The poor little thing could be heard wailing as Toni poured water over him and bundled him up in extra towels and blankets.

Toni proceeded to take the scorched koala, to the nearby Port Macquarie Koala Hospital, a specialist facility currently treating a number of injured koalas.

People across the globe have been following his recovery.

His horrific burns had to be bandaged up, and the hospital warned that burns tend to get worse before they get better.

His burns were continuing to get worse each day.

Sadly, the decision was made to have him put down.

The hospital announced the devastating news on Facebook this week.
"Today we made the decision to put Ellenborough Lewis to sleep.
"We placed him under general anesthesia this morning to assess his burns injuries and change the bandages."

Tragically, there was no way his burns would heal.

"We recently posted that 'burns injuries can get worse before they get better'. In Ellenborough Lewis's case, the burns did get worse, and unfortunately would not have gotten better."

The hospital then thanked everyone for their ongoing support.

"The Koala Hospital's number one goal is animal welfare, so it was on those grounds that this decision was made. We thank you for your ongoing support." Sadly, Lewis' story is a stark reminder of the devastating impact these fires are having on the local wildlife. In fact, koalas have faced a heartbreaking decline in numbers as a result of the bushfires, which many experts fear they will never fully recover from. Keep scrolling to learn more about this heartbreaking news and what the future (if there is one) is looking like for these animals.