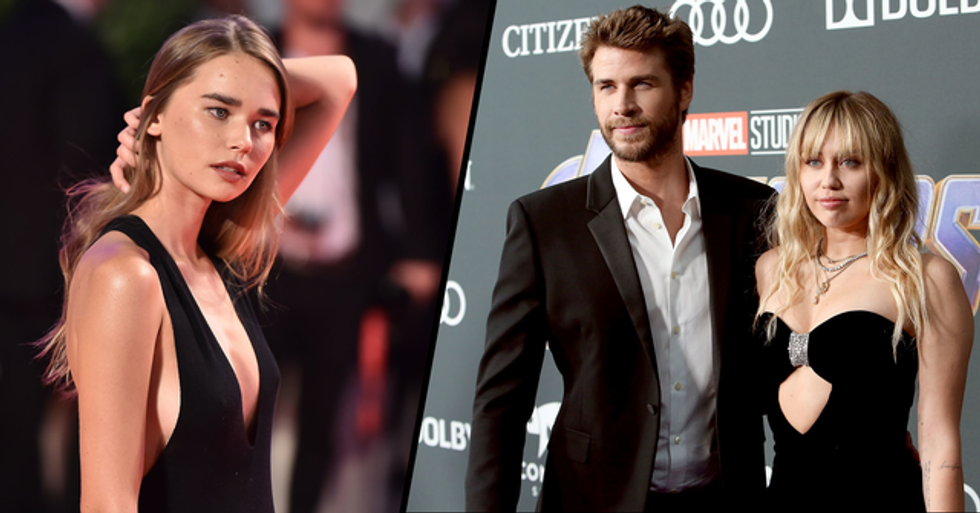 Unless you've been living under a rock for these past few months, you may have heard that Miley Cyrus and Liam Hemsworth broke up... Again.

And, as most newly-single people do, the pair have been hastily moving on with new love interests. But Liam's latest girlfriend has received some major backlash off loyal Cyrus fans, and they're all saying the same thing...

Back in August, only 7 months after tying the knot, the Cyrus-Hemsworth duo called time on their lengthy on-off relationship.

It's been one hell of a rollercoaster ride for the couple.

Miley and Liam first started dating back in 2008 when they met on the set of The Last Song and confirmed their engagement a couple of years later in 2012.

But there was trouble in paradise...

In 2013, after months of speculation, the couple officially called off their engagement.

Remember? When Miley swung around, half-naked, on a giant wrecking ball, singing a song that was not-so-subtly aimed at her relationship with Liam? What a time to be alive!

But the time apart seemed to do them some good...

And the ring was officially back on Miley's finger. “Of course it was hard, man. But at the time we were going in different directions, and it’s just what needed to happen," Liam explained to GQ about their break up. "We were both super young, and it was a good decision at the time—we both needed that."

Things seemed to be set in stone...

And the couple remained quite happily together for the next couple of years, with both of them regularly posting cute selfies and videos onto their social media accounts.

And the news everyone had been waiting for came in December 2018...

Miley and Liam finally tied the knot in a private and low-key ceremony on Christmas Eve.

Things seemed to be going well...

After a decade of breaking up and getting back together, the pair had seemingly solidified their relationship... What could possibly go wrong?

7 months of happy marriage was quite clearly enough for Miley and Liam, and they officially called it a day back in August.

The Australian actor posted a sunset picture with the caption, "Hi all, just a quick note to say that Miley and I have recently separated and I wish her nothing but health and happiness going forward."

And, of course, there was instant drama.

Who even is Miley without a little controversy? Just weeks after her split from Liam, Miley was pictured cuddling and kissing her "friend", Kaitlynn Carter while on vacation.

But, Miley being Miley...

Her fling with Kaitlynn didn't last too long, and she quickly moved into more familiar territory.

She was quick to show off her new romance with Australian musician, Cody Simpson, back in October.

And ever since, the loved-up couple have seemingly been inseparable, and are consistently sharing selfies and even matching tattoos.

But, while Miley's been flaunting her new relationship to the world...

Unlike Miley, the actor has remained quiet on their relationship breakdown...

Liam has remained respectful, even when Miley and Cody put him on blast on their live Instagram Stories. Which wasn't cool by the way, Miley...

There have been a couple of dating rumors...

And he was spotted walking around New York hand-in-hand with the Australian model, Maddison Brown, a couple of months ago.

But nothing serious ever came of Liam and Maddison's brief romance...

And the actor found himself single once again.

Liam seems to have found love once more.

The Australian model has reportedly been dating Liam for the last couple of months...

And rumors were fueled even more when she was seen having lunch with Liam and his parents in their home country of Australia... This must be getting serious if she's meeting the 'rents!

But, despite their happy romance...

Miley fans are not pleased with Liam moving on with his life...

Despite the fact that Miley herself moved on mere weeks after their split. How does that work, guys?

Poor Gabriella has taken all the heat from angry fans...

With social media users relentlessly comparing her to Liam's old flame. "You can never be better than Miley." one Instagram user commented, while another wrote, "From Miley Cyrus to Gabriella... such a downgrade."

And nor does anyone partaking in a relationship - Mind your own business, everyone! Celebrity relationships are always going to come under the fire of the public, and one man who isn't a stranger to this is the Hollywood actor, Leonardo DiCaprio. He has recently been called out for having "age-inappropriate" girlfriends, and his current love interest, twenty-two-year-old Camila Morrone has now addressed the issue. Keep scrolling for the full story...