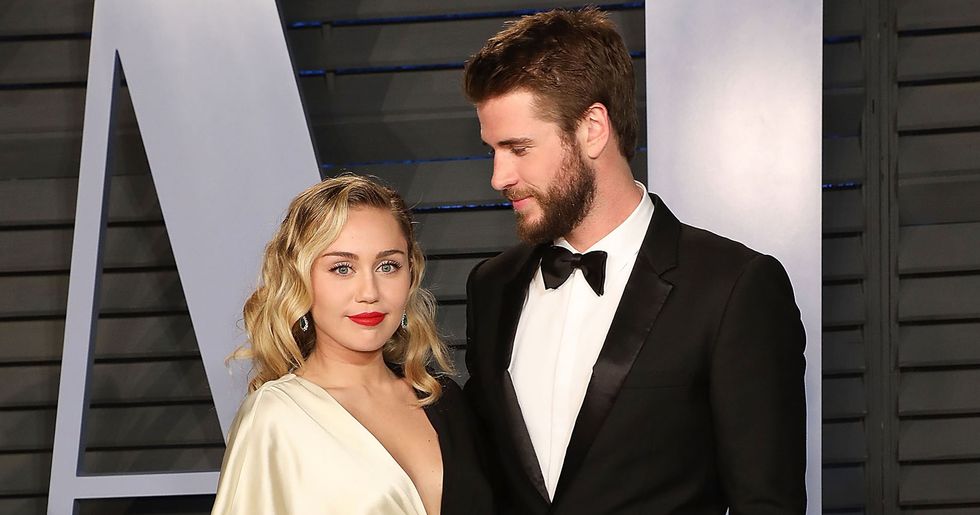 When Miley Cyrus and Liam Hemsworth finally tied the knot, after an on-and-off 10-year relationship, it was the news of the century.

However, after just 8 months of marriage, the "happy couple" announced their split.

It's certainly been a turbulent few months for the pair, with Liam expressing his heartache, while Miley has had numerous very public flings with the likes of Kaitlynn Carter and Cody Simpson.

But Liam's sister-in-law has spoken out about the split, claiming that her brother-in-law deserves much better.

She was Hannah Montana a very long time ago...

Miley Cyrus got her first big break in showbiz way back in 2006, having first auditioned for the role when she was just eleven years old. She played alongside her real-life dad, Billy Ray Cyrus, as she oscillated between being a pop star and a regular teenager. Presumably, something about this role just spoke to her.

And then she went on to conquer the music world...

Miley has had 3 number-one albums on the U.S. Billboard 200, plus another top 5 albums, all since 2007. She's also had 9 top-ten singles, including Party in the U.S.A., The Climb, Wrecking Ball, and Malibu.

In true Hollywood style, twenty-year-old Liam and seventeen-year-old Miley first met on set back in 2009. They played the unlikely couple who found love in this Nicholas Sparks adaptation. It's not quite The Notebook, but it did bring us this wonderful, real-life romance.

In September 2013, after months of speculation by the media that things may be on the rocks, this dream couple split up. They stayed good friends, but they just needed some time apart at this point.

And then Malibu happened...

They were destined to get back together...

In a case of life is better than fiction, it seems like this couple was just meant to be. At the end of 2015, they started hanging out again and ended up getting back together.

Before they broke up in 2013, they had spent nearly a year being engaged to each other. When they got back together, in 2015, they remained fiancées. They even kept the same ring.

They were living their best lives... or so it seemed.

They were living together, holidaying together, and just generally looked so happy, and so normal. Plus, they are both vegans and regularly share pictures together of themselves with all their pets.

After months, years even, of thinking that maybe they were just another celebrity couple who would never tie the knot, 2 pictures were posted.

Out of nowhere, to celebrate Valentine's day, Miley started posting some photos from their wedding. In true Miley style, she posted a real picture of them just being them.

This is one of the few pictures that have been posted of Miley in her wedding dress. Her Vivienne Westwood dress is simple but elegant. Much like their wedding, which was for close family only.

A rep for Miley told People 8 months after the marriage: “Liam and Miley have agreed to separate at this time. Ever-evolving, changing as partners and individuals, they have decided this is what’s best while they both focus on themselves and careers. They still remain dedicated parents to all of their animals they share while lovingly taking this time apart. Please respect their process and privacy."

Miley captioned the picture "Mute me if you don’t want SPAMMED" In response to the image, her sister, Brandi, commented, “Boooooooooooooom!"

But Miley's antics over the last few months certainly confirmed the split...

She quickly jumped into very public flings with fellow A-listers such as Kaitlynn Carter and Cody Simpson.

Miley also made sure to make plenty of digs at Liam during this time...

Who could forget the time Miley did a live Q&A on her Instagram with Cody Simpson?

Miley was clearly hinting at Liam...

She continued, “I always thought I had to be gay because I thought all guys were evil, but it’s not true. There are good people out there that just happen to have d**ks. I’ve only ever met one, and he’s on this live." At this point, Cody starts laughing and beaming... clearly loving the blatant digs at the ex-husband.

Miley's childish behavior didn't go down well with Liam and his family...

Liam, as well as many others, denied Miley's claims of him being a neglectful husband and it's very likely that Miley has been very dramatic in these ridiculous accusations.

He is dating Australian actress Maddison Brown, and the pair seem to be a much more suitable match than he and Miley were.

But just because he's dating again...

Doesn't at all mean he's over his heartbreak.

Liam's sister-in-law has spoken out about his well-being...

Elsa Pataky, who is married to Chris, spoke to Hola! recently about how Liam is doing.

Of course, Liam has been a little down...

"My brother-in-law, well… After a relationship that you've dedicated 10 years to, he's a little bit down, but he's coping well," she said.

Liam and Chris are very close.

"You always find support in your family, and he's joined at the hip with his brother, who has been there to give all the strength he needed," Pataky added.

We hope that Liam finds true love with his new beau...

As, at the end of the day, he's handled his divorce with dignity and respect, unlike his ex-wife. To keep reading about Miley-related news, keep scrolling to find out why she split up with Cody Simpson...