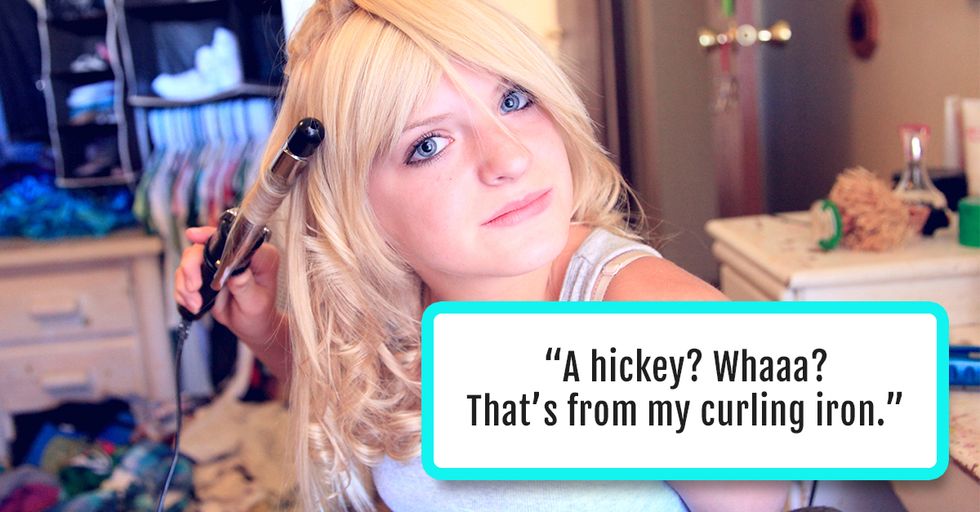 We all told lies when we were kids.

It was a basic part of growing up, and one of the only ways you could escape the many and numerous punishments headed your way whenever you were bad.

Now, people are going to Twitter to reveal their most common lies.

Actually, if you think about it, this isn't so much a lie as it is a slight twisting of the truth. Note the strategic use of the words, "I think."
"I think" isn't the same thing as saying "I know." In other words, not a lie. Just saying...

Oh, what tangled webs we weave. This right here is one of the most common excuses known to adolescence.
Sure, your volume wasn't a thousand percent up, but the parents don't need to know that, do they?

Scratch what we said before about blocking parents on Twitter, this is the original excuse to end all excuses.
Even back in the days of Tom Sawyer and Huck Finn, failing students used this excuse. It always caught up with them, though...

5. But do you have a curling iron though?

It's not hard at all to see the resemblance between a hickey and a curling iron burn.
Parents however, may be more eagle-eyed than we think. Yeah, your lie may have worked, but probably not...

"Then what's that smell on your breath?" That's the exact question your mom is gonna ask when you stumble home.

Serious question, does this gambit ever work? A couple of us have tried it, but no dice.
The moment mom brings out that thermometer, you're screwed. This is one of those lies we wish we could have pulled off.

This is one of those lies that isn't actually a lie, per se. When we were teens, we honestly meant to do the dishes. Really, we did!
It was just, other things got in the way, like texting, talking on the phone, watching TV, gaming, walking the dog, considering doing our homework...

It took us a few seconds to understand what this tweet meant, and wow, we can imagine this is one of the most embarrassing lies to tell.
We can also imagine that very few parents would actually believe it, unless they're very, very, very naive.

This right here is one of those old reliable-type lies that saves your ass because everyone remembers it being true in some instances.
The curve was real even back in your parent's day, not to mention their parents, and so forth.

11. But what do you actually need it for?

This is a darn near universal lie. You're broke, you need money (probably for alcohol and other not so legit things) so you say you need it for drinks.
Of course your parents would believe you. After all, you're their innocent little angel, aren't you? Also, books are super expensive these days.