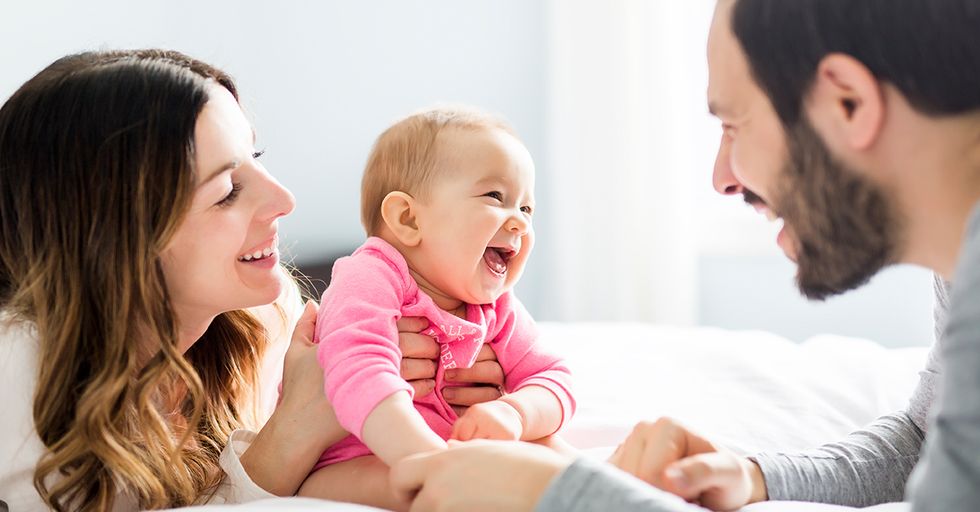 So you're having a baby. Great news! You're probably really excited and also a little scared. It also probably means as soon as your stomach started to pop out of your jeans, you were bombarded with advice about how to raise the child who hasn't even exited your womb yet.

For some reason, people love to share their parenting secrets with you. Whether you want them to or not. Heck, people will share them with you even if they're related to you or not. Just try to stand in line at the grocery store and see how long you can go without someone telling you how you absolutely must have a water birth, while someone on the other side of you assures you water births are very dangerous. Or they'll tell you how you should ever feed a child peanuts, because they might have an allergy, and so on, forever.

People love to tell pregnant women and expecting partners all the terrible things that are going to happen once they have that baby. They typically mean well, but I wouldn't believe everything they say.

Well, that's just not true. After all, if people only got pregnant one time and then never had sex again how would you explain siblings? The truth is that having a baby can change your sex life dramatically, but that doesn't mean it has to go away completely.

Some women even say that they feel sexier after having a baby.

Having a baby can actually spice up your sex life. Whether it's seeing how well your partner takes care of your new baby that gets you in the mood, or a new mixture of hormones, some people find parenthood very sexy.

But some people don't, and that's normal, too.

The truth is having a baby can slow down your sex life or put the brakes on it altogether. It can be stressful, tiring, and not to mention, hard on the woman's body to create a new person. But, just because you may not be having sex as much, it doesn't mean you and your partner won't find ways to be close, it just might involve less sexy lingerie.

Ok, technically this is true. Most women are healed enough from childbirth to have intercourse after 6 weeks. But that doesn't mean either partner will be emotionally ready by then. So don't be surprised if sex at 6 weeks, this doesn't happen or if it isn't as fulfilling as sex used to be. But that doesn't mean things won't get better!

New parents do get a lot less sleep. In fact, a recent survey found that only half of the parents with kids under 6 months get more than three hours of uninterrupted sleep per night. I wouldn't be too discouraged, yet.

The American Academy of Pediatrics does recommend that new mothers try to breastfeed. Breast milk is the healthiest food for babies, and the act of breastfeeding can help a mother and baby bond. However, there are many reasons people choose not to breastfeed: and that's totally okay!

Some women don't produce enough milk to feed their babies, have medical conditions that don't allow for breastfeeding or have other reasons for not breastfeeding.

Baby formula is created to give babies all the nutrients they need so if you aren't able to breastfeed, they will still be fed properly. In fact, those studies you see online that show how breastfed babies are healthier than formula fed babies aren't even necessarily accurate. Most of those studies didn't account for other factors such as income and the environment. It's hard to say for sure how much better breastfeeding actually is than formula, so just do what works best for you!

Lie: "Breastfeeding isn't painful if you do it right."

One of the reasons women choose not to breastfeed is that it can be painful. Breasts can become chapped, sore, and cut up from little baby teeth, but that doesn't mean things aren't going well. Breastfeeding is going to be at least slightly painful and unless your doctor says you are doing it wrong, there's no reason to think this is a bad sign.

If you're worried about losing weight post-baby, don't rely exclusively on breastfeeding to get you back to your former size. While breastfeeding does burn a lot of calories, it also makes you super hungry, and as a result, you will likely eat a lot more.

For some women, breastfeeding does help them lose weight.

But for others, it doesn't. It just depends on your body. So if you were counting on breastfeeding being the magic potion to melt away those pounds: don't be disappointed if it turns out not to make much of a difference. Doctors say the best way to lose weight after pregnancy is to try not to gain much in the first place.

Lie: "You can eat whatever you want when you are pregnant."

Sigh. This is a bummer. We've been conditioned to think women are supposed to gain lots of weight during pregnancy and that it's an excuse to eat whatever we want, but sadly, that might not be true.

So only about as much as an extra sandwich or a bowl of ice cream, not an entire order of nachos to yourself for every meal. Doctors say you should still eat a healthy diet, too, or you could be putting yourself at risk for gestational diabetes. Basically, it's not the free pass we all wish it was.

Lie: "You have to get rid of your pets when you have a baby."

People have asked me if I'm going to get rid of my cats when I have kids. Um, not a chance! There are a lot of old wives tales about pets and babies that make people think they can't co-exist, but luckily, most of them are untrue.

As long as pets are vaccinated and healthy, they aren't a danger to your baby.

However, some cats do shed a parasite called, toxoplasmosis in their waste that can be dangerous to pregnant women. But it's very easily avoided by not being the one to clean out the litter box (a win for pregnant women!) or wearing gloves when you do.

Lie: "Cats suck the life out of babies."

One old wives' tale mentions that cats will smell milk on a baby's lips and try to lick it off, suffocating them. Or they will sleep on top of the baby and suffocate it. While it's true that cats are prone to sleeping on whatever warm surface they can find, as long as you are supervising your cat while it is with your baby and not letting it sleep in their crib, there's not really any danger of this. Babies are actually much more prone to suffocating when sleeping with a human, which is why doctors advise parents not to co-sleep with their babies.

Lie: "Dogs will become jealous and bite the baby."

It's not likely that a baby will change your dog's personality much. If your dog is well-trained and supervised when it's with the baby and your kid is taught how to respect the dog when it gets older, there's no reason to get rid of Fido.

Lie: "You can sleep when the baby sleeps."

Well, you could, but have you ever met a baby? They don't exactly sleep like a normal human, they sleep in chunks throughout the day. This may be ideal for some, but most people don't want to and probably can't take five 45 minute naps throughout the day.

Lie: "Once you have the baby, you'll forget the pain of childbirth."

Having a baby doesn't erase the pain. You may be brave enough to go for it again, but that doesn't mean you'll forget the pain of childbirth. Psychically, you'll need time to heal your body as it just performed an incredible feat!

Some women even suffer PTSD from labor.

And some women experience postpartum depression. There are lots of reasons you may not forget the pain of labor, and all of them valid. Be sure to take care of yourself as well as your new baby after birth.

Lie: "The day you meet your baby will be the best day of your life."

Here is a truth that we definitely don't tell new moms and dads: sometimes you don't love your baby right away.

It may sound crazy, but it's true and it's nothing to be ashamed of!

We always imagine as soon as our baby comes into the world we will look at their tiny little face and fall in love. That's what it's like in movies and that's the story you probably hear from most parents. But that's not actually the way it goes a lot of the time. As many as 20% of new parents say they didn't feel a bond with their infant for days, weeks, or even months after birth.

This often happens to parents who didn't get to spend time with their babies right after they were born.

If a baby was rushed to the NICU or the mother had a complication that required them to have medical treatment after birth, they may feel like they didn't bond with their baby right away. This also occurs to dads who don't get to experience the closeness of breastfeeding. But not to worry, the bond will come.

What does "easier" mean, exactly? Things will definitely change, but every age will bring new challenges. Some things may get easier, and some things may get harder. Don't expect things to be smooth sailing just because you've passed the teething stage.

Lie: "You'll have no social life."

Look, nobody who is having a baby should expect to be out clubbing every night, but that doesn't mean you won't have any friends. True friends will always be around, even if they may have to entertain themselves for 20 minutes while you soothe a crying baby or if your weekly lunch dates have to happen over Skype now.

Many communities have programs set up specifically for new moms to make friends with other new moms.

Do some research and find spaces in your community where you can connect. You may make more friends now that you have a kid!

Babysitters can be expensive, but it's worth shelling out the cash for one night alone together. If it's really not in your budget, ask a family member or friend if they are willing to help out.

Many people think you can't get pregnant when you are breastfeeding, so why use a back-up birth control? That's not exactly true. Breastfeeding does stop ovulation for a while, however, there's no way to know exactly when it will start up again. So you may ovulate without knowing it.

Lie: "Having a baby will fix a relationship."

This is a grand lie! Having a baby will add much more stress to your life, so if your relationship is in trouble, having a baby isn't the way to fix it, it will more likely make things worse.

Lie: "Getting pregnant is the easy part."

Last but not least, if you are reading this list but aren't pregnant, be warned. Getting pregnant is much harder than you may have been led to believe in your high school sex ed classes. It could take one cycle or it could months, or even years to get pregnant. So, remember this the next time you ask someone when they're going to have a baby, you never know where someone is on their journey to parenthood.