What Life Inside an Amazon Warehouse Is Really Like | 22 Words 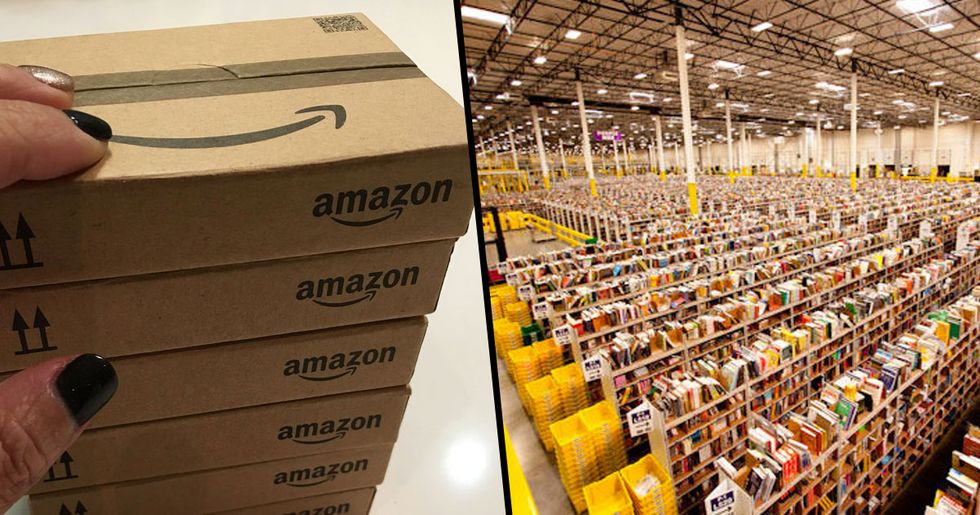 What Life Inside an Amazon Warehouse Is Really Like

Imagine a job where you're mechanically deterred from taking breaks, from talking, where free time is labelled 'off task', and compensation claims are repeatedly denied. Imagine a job where your salary barely keeps you afloat, whilst the value of your labour is accumulated into the pockets of a man who owns his own space program. Imagine having to continue working with carpel tunnel in your wrist, or with baulky knees, or with boxes falling on your head. Imagine being electronically tracked, down to the nearest second, by line managers. Imagine a job where engineers propose wheeling you around the factory floor in a cage. Imagine a job with mandatory overtime during the holiday season, or with deadlines so tight, that there's no time to use the bathroom. This is the price for our pursuit of comfort. This is life inside an Amazon Fulfilment Center. I think it's time to ask ourselves - what's fulfilment worth?

It all started in 1997, that was when the big switch came

It all started back in 1997 when, three years after the company had launched, Amazon changed its business model from selling books to an online distribution network. It was during this year that the first two fulfilment centres opened in Seattle and Delaware.

The decision actually beckoned in the dark ages for Amazon; the internet was still in its infancy and Amazon’s Jeff Bezos had a hard time fitting the new business model to it. In 2000, Amazon reported a quarterly loss of $323 million, and a subsequent quarterly loss of $200 million, sending share prices plummeting.

But then the clouds cleared in 2005

But the storm clouds cleared for Amazon, and from 2005 the company experienced massive financial growth, opening up fulfilment centres all over the world at an alarming rate.

Today they have more than 75 fulfilment centre in the North America alone.

In September, 2018, the stock market briefly listed Amazon as worth over $1 trillion, before dipping back down again. Founder, Jeff Bezos, is currently the richest man in the world and the owner of a space program and a newspaper.

Wages have been stagnating while the net worth has gone up

Wages are low. Whilst Amazon made a big song and dance about the fact that they will now pay workers a living wage of $15 per hour, that’s still not enough to lift someone securely into the American middle class. This new wage has been raised from the $10 per hour starting salary, reported in one fulfilment centre in Austin.

All the while, Bezos rakes the profits

While his workers stumble towards a living wage, Bezos accrues a personal wealth increase of over $200 million dollars per day.

The Fulfilment Centres are the red blood cells of the Amazon model. The company needs people working round the clock at the fulfilment centres, so they can constantly deliver goods as fast as possible, and manage their enormous inventory.

Men work best with machines at their heels

Whilst much of the work in the fulfilment centres has been fully automated, Amazon still relies on an army of employees to connect the gaps left by the machines.

Work on the fulfilment floor is strenuous, repetitive and labour intensive: workers (or as Bezos likes to call them - ‘Amazonians’) are monitored and frequently treated as disposable parts in an otherwise functioning machine. Pushes towards unionisation have been met with top-down legal action and remonstration, and injuries are rife.

All watched over by machines of loving grace...

Amazon is a complex machine, with a complex schedule. For all this to run smoothly, workers must be monitored and directed down to the nearest second. They have strict time schedules with each task timed based on a “rate" set by managers who push workers ever faster. Monitoring the workers also helps line managers quell descent and highlight insurrection. Amazon workers in Staten Island say they have to pick up a package once every seven seconds.

An undercover investigation in the UK revealed that workers were urinating into water bottles and trash cans, because they couldn’t find time in their strict schedule to use the bathroom. When the results were published, more came forward - and drivers told journalist that they’d be forced to use their vans as makeshift toilets to meet delivery goals.

I'm afraid for some Amazon employees, thanksgiving is cancelled.

According to a part-time employee at the Stoughton, Massachusetts, in 2015, Amazon warehouse told employees that they wouldn’t be given the day off for Thanksgiving - thanks to latent ’targets’.

There was a rigid points based system for a while.

There’s some confusion as to whether Amazon still uses this draconian system as a weapon to deter people from calling in sick or prioritising anything but work. Amazon have come out to various publications to say that they’ve now dropped the system, but one worker, as of last may, came out to say the system was still in place. Which raises the question - why don’t we know more about this?

At this point you’re probably saying to yourself, ‘come on, it’s not that bad; it’s a job, and like any job, there are rules. It’s not like they’re some kind of evil dystopian institution.’ Well, I have three words for you: Workers… In… Cages…

I’m actually serious... They considered this doing this.

In 2016, Amazon filed a patent for a ‘cage for workers on wheels’. The patent was filed very quietly and was only found thanks to the diligent work of two academics. The cage on wheels was meant to protect workers from dangerous robotics on the factory floor - but once the information got out, it was dismissed by executives as ‘a bad idea’.

And it’s not just on the factory floor, it’s the offices above too.

Floor workers may get a bad time of things, but it’s no better for the office workers. An investigation by the New York Times into the Amazon headquarters revealed a number of troubling facts about work life there.

New Amazon software allows not only for bosses to evaluate subordinates, but for co-workers to anonymously evaluate each other as well, creating a climate of fear and control at work.

Executives are also expected to be available by email 24 hours a day - so the executives are just as stressed.

Where shall we go on holiday this year? How about Starbucks?

One employee reportedly spent her whole holiday in Starbucks, so she could deal with the intense expectations of her strenuous work life.

Another employee was told she was a ‘problem’ after taking some time off to look after her father, who was dying. And after that, she was blocked from moving to a less pressured job. Does all corporate life warrant this kind of systematic emotional abuse?

Meet Vickie Shannon Allen, she was injured while working at a Fulfilment Center in Austin, Texas.

Then things got really bad.

After successfully filling for worker’s compensation and returning to work in January 2018, she was injured again, whilst lacking a brush guard. She then received no sick pay, and was evicted from her caravan park. She now lives in her car.

After receiving only one week of paid leave…

After receiving only one week of paid leave, Amazon offered her a $3,500 buyout, which would involve her signing an NDA. She rightfully declined.

The videos she posted went viral.

Allen posted the videos above, which went viral, and when Business Insider reached out to Amazon regarding the case, this was their official response...

The response from Amazon was...

"We don't recognise these allegations as an accurate portrayal of working at Amazon… We are proud of our safety record and thousands of Amazonians work hard every day innovating ways to make it even better… Amazon has created over 130,000 jobs in the last year alone and now employs over 560,000 people around the world. Ensuring the safety of these associates is our number one priority."

At the heart of that is an argument that reads ‘But we’re an enormous international monopoly, therefore, of course we care about our workers.’ Which unsurprisingly doesn’t ring true.

So what can we do about this?

It seems pretty bleak, and, as an individual, it’s out of your hands. However, as a society, there are plenty of social, political and economic measures we could put in place to quell the tyranny of corporate giants like Amazon.

There have been brutal attempts by the company to crush the promise unionisation, and there’s a huge push for warehouse workers to unionise. But these unions will be fragile and will need public support to ensure they aren’t compromised.

Amazon got away with paying the princely sum of $0 in federal taxes last year. This isn’t good enough, we need politicians who will tax the company properly.

And the third is to ask yourself - is this really worth it?

Yeah, maybe just stop using Amazon so much. The platform has an intense grip over international consumerism, and while you can wait around for governments to regulate it, that may not happen, and if it does, it will happen very slowly. Monopolies are good for the consumer, but not for everyone else involved in the system, and they let companies like Amazon get away with treating workers like animals - or worse - machines. Consider waiting a little longer for your stuff on account of Vickie's story and others' like her.

I know this has been a hard read, so you’ve earned this.

Look, I know thinking about this stuff is difficult and makes you feel powerless. But I’m really glad you stuck it out to the end. So, for your amusement, here’s a video of a topless ‘bro’ trying to teach viewers how to maintain a mullet. I promise it's every bit as stupid as it sounds. Enjoy...