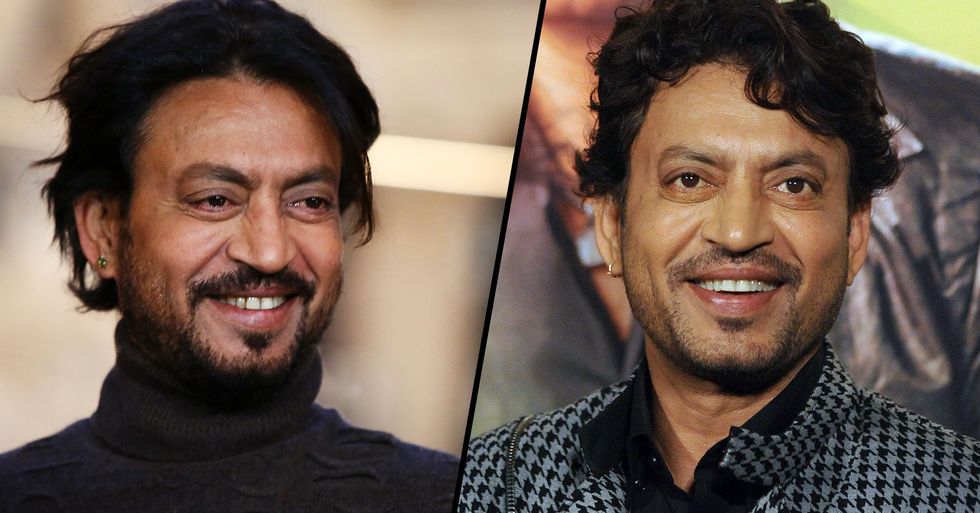 'Life of Pi' Actor Irrfan Khan's Cause of Death Confirmed

Irrfan Khan, the star from hit movies such as Jurassic World and Slumdog Millionaire, has sadly passed away.

Keep scrolling for the full story, and to hear the tragic circumstances surrounding his death...

Bollywood has lost one of its legends.

Aged only fifty-three, Irrfan Khan has sadly died in a hospital in the western city of Mumbai, his agency has confirmed.

Khan was incredibly well known amongst the Bollywood community.

From Jaipur, India, Khan embarked on his acting career after being granted a scholarship at the National School of Drama in New Delhi.

But the actor came from humble beginnings.

Throughout his early life, Khan and his family struggled with money, and the actor's promising cricket career was cut short as a result of his financial difficulties.

And this scholarship was set to change his life forever.

While working as an airconditioning repairman, Khan worked hard at making it as a Bollywood actor. And, evidently, his passion and dedication to acting eventually paid off.

Khan went on to portray many roles in Hindi cinema...

Lunchbox, Piku, and Hindi Medium, just to name a few.

But most of you will probably recognize him from his roles in Hollywood blockbusters...

Such as Slumdog Millionaire, Life of PI, and Jurassic World.

The actor went on to win many awards in his lifetime...

Including a win in India's National Film Award for his leading role in the 2013 Paan Singh Tomar, a biopic about a top athlete who becomes a bandit.

Khan was known for his nuanced and understated performances...

And he was even regarded by many as one of India's most talented actors.

But, despite his success...

The actor was actually severely unwell.

It has been a long and gruelling battle for the actor.

And, yesterday, he was rushed to Kokilaben Dhirubhai Ambani Hospital in Mumbai as a result of his debilitating condition.

But, devastatingly, his health took a sudden turn for the worst.

And, today, he succumbed to his illness.

Irrfan peacefully passed away surrounded by his family.

The statement released by his PR company confirming his death said, "Surrounded by his love, his family for whom he most cared about, he left for heaven abode, leaving behind truly a legacy of his own. We all pray and hope that he is at peace."

And their 2 sons, Babil Khan and Ayan Khan.

Since news of his death broke, tributes have been flooding in.

His Lunchbox costar, Amitabh Bachchan, tweeted about his "gracious colleague", and labeled him as a "prolific contributor to the world of cinema."

A fantastic costar, an actor par excellence ,and a beautiful human being , you are irreplaceable #irrfankhan. ⁦… https://t.co/oyyVmplhgz
— Raveena Tandon (@Raveena Tandon)1588143121.0

And to share their thoughts on the man they loved so much.

The Prime Minister of India even paid tribute.

Irrfan Khan’s demise is a loss to the world of cinema and theatre. He will be remembered for his versatile performa… https://t.co/Jw9HjDBJg5
— Narendra Modi (@Narendra Modi)1588149860.0

Narendra Modi tweeted: "Irrfan Khan’s demise is a loss to the world of cinema and theatre. He will be remembered for his versatile performances across different mediums. My thoughts are with his family, friends, and admirers. May his soul rest in peace."

But now, we are all wondering the same thing...

What was it exactly, that cut Khan's life so brutally short?

Well, back in 2018, the actor was diagnosed with a rare form of cancer.

An endocrine tumour, to be precise. This aggressive type of cancer affects cells that release hormones into the bloodstream.

Two months after his diagnosis, Khan penned an open letter about his experience with his cancer treatment...

Where he voiced the "intensity" of his pain and the "uncertainty" he held of his life.

Today, the world has lost a true legend.