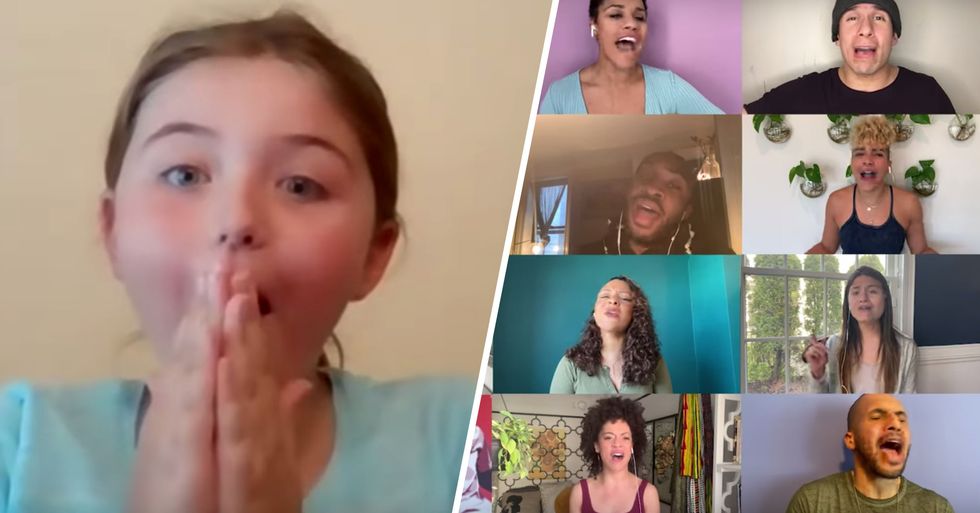 We all need a little bit of happiness during these difficult times, and thanks to John Krasinksi, this has been made possible.

In a heartwarming turn of events, he organized for the original Hamilton cast to surprise a 9-year-old superfan via a Zoom call...

We are living in uncertain times...

And we all need a little bit of hope and happiness to get us through these difficulties.

Luckily for us, John Krasinksi has come up with an amazing way of spreading a little joy.

For those who aren't familiar, John is an American actor and filmmaker who is best known for his role in The Office U.S and for creating, directing and starring in A Quiet Place.

The pair starred alongside each other in A Quiet Place and, we must say, they make for the cutest couple.

It is called Some Good News and he uses the show to talk about heartwarming stories that often includes special guests.

The channel has been a major success...

And it already boasts an impressive 1.35 million subscribers.

And even though this episode was truly special, this week's episode is perhaps the best yet.

The episode started with heartwarming stories from all over the world...

But John then pulled up a tweet from a mom who reached out to Hamilton creator Lin-Manuel, explaining that her 9-year-old daughter has been dreaming for the last year to see the show live in Broadway and they had secured tickets to see the show this year. But of course, it has sadly been canceled and the little girl has had to go without.

For those who aren't aware, Hamilton is an award-winning Broadway musical.

This little girl is named Aubrey and John invited her to live-chat on the episode.

"I hear you're a big Hamilton fan," John said to the little girl...

John promised to fly Aubrey and her mom to New York to see the musical when the lockdown is eventually lifted...

But that wasn't the only surprise the generous actor had for her.

Emily Blunt, who plays the infamous Mary Poppins - which is another of Aubrey's favorites, then joined the call saying "Hi Aubrey!"

And whilst she was chatting to Emily, Lin-Manuel Miranda (the creator and star of Hamilton) arrived in the Zoom chat... leaving the little girl completely speechless.

John explains to Lin-Manuel his plan to send Aubrey to New York to watch the show...

And he replies with, "I think we can top that right now" as more people begin to join the call.

And they all began singing "Alexander Hamilton" in perfect harmony - which is Aubrey's favorite song.

And it is truly a performance that Aubrey will never forget.

You don't have to be a Hamilton fan to get shivers watching their incredible performance...

And there were certainly a few tears involved!

This was truly a special moment for Aubrey...

And it was the kindest thing that John, Emily, and the entire cast of Hamilton could do for a down-heartened little girl. Watch the incredible episode here, and keep scrolling to learn about the celebrities who are reading bedtime stories for children who are experiencing stress and anxiety...