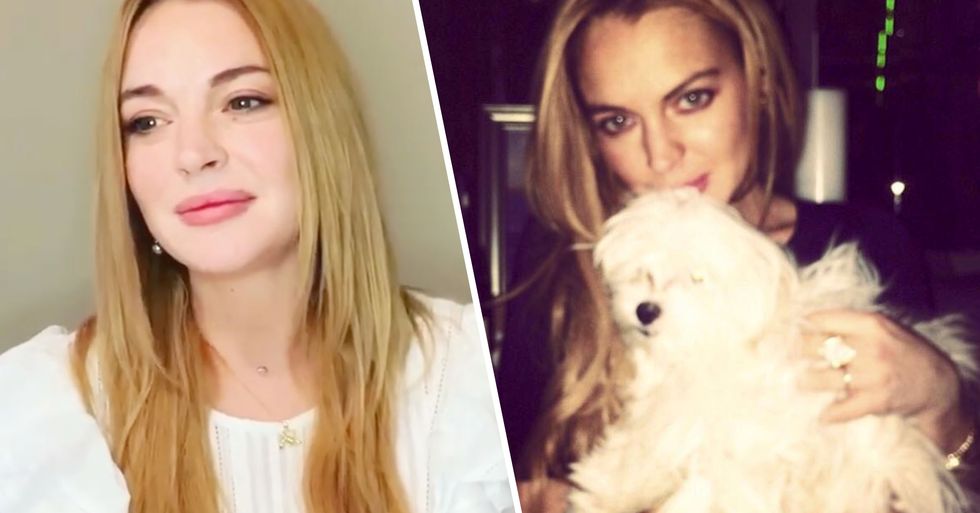 Sadly the time must come for all our furry companions, but that doesn't make it any easier. The love we have for our little friends makes us want them to live forever.

It's not surprising that people will go to great lengths to try and prove to the world how fantastic they really were.

Even if that means making up their age, on purpose or by accident, because that childhood pet really does feel like you've had them forever.

That might just be the case for this A-list celebrity. Keep scrolling to read more...

Dogs might just be the single best things on this planet...

We need therapy dogs now more than ever...

Many service dogs are used for a little bit of therapy...

And they have proven to be calming for people who work in stressful situations.

That being said, Bluey, the Australian cattle dog holds the world record for being the oldest dog ever recorded, at twenty-nine years and 5 months old.

Lindsey Lohan claims that her dog wasn't far off breaking that record.

She shocked dog owners everywhere with the news that her former dog, Gucci, lived for twenty-seven years!

The Mean Girls' actress revealed the news on her Instagram live.

She said that the mini Maltese lived to be over twice the average age of normal dogs, which seems pretty unlikely.

It's recorded that Maltese dogs have an average lifespan of twelve to sixteen years.

This all started when she responded to a fan's question about her pups, Lindsay said: "I do not have a dog. My dog actually passed away a few months ago. She was my baby. I had two. I had Chloe and Gucci."

Lindsay clearly thought the world of her pup.

"I named my dogs after… I had my first dog when I got my first pair of Gucci boots and she ate them and I named her Gucci. And she lived until 27 years old. She was a strong, little, mini Maltese and yeah, that happened. God bless her. God rest her soul. She’s watching me, my puppy angel."

Twenty-seven years for any dog is an incredible feat.

When Gucci died, back in 2013, Dina tweeted that she was in fact fifteen.

She wrote: "Sad Day Gucci our family Dog passed away! She was 15 and brought so much love to us ……she will forever be missed xo."

But here's where it gets even more confusing...

A source told E! News at the time, the family pup lived to see 19-years-of-age and died just before Lindsay’s 27th birthday.

No wonder Lindsay is so confused, we all are.

While we know it's not completely impossible, according to the Guinness World Records, only 7 dogs have lived up until the age of 27. I mean, does it really cause anyone harm in letting her think she lived that long? Keep scrolling to see some super cute footage of puppies training to be guide dogs, you won't regret it...