Lion Terrifies Photographer With Loud Roar, Then Winks at Him | 22 Words 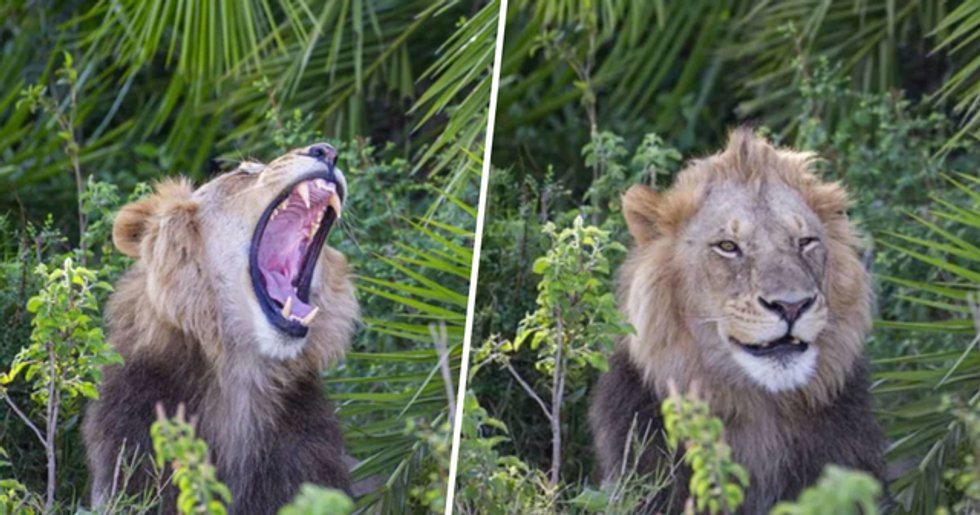 Lion Terrifies Photographer With Loud Roar, Then Winks at Him

Nature photographers have one of the coolest jobs out there. They get to travel to the most exotic locations and see some of the most incredible creatures on Earth. But aside from the more exciting aspects of the job, there are also some slightly off-putting aspects, too. Like, for example, getting absolutely terrified by one of the most dangerous animals on earth, perhaps?

One photographer certainly saw the less fun side of the profession this month, when the king of the jungle decided to play a prank on him. The lion first let out an almighty roar at the photographer - and then, once satisfied they were suitably terrified, gave him a cheeky wink. Curious? Read on.

For many, wildlife photography is a dream profession.

The idea of being able to capture the beauty of our incredible planet for a living seems almost too good to be true.

It encapsulates much of what people hope to get out of a career.

Like, for example, the opportunity to travel to remote, unusual, or interesting locations around the world.

Wildlife photographers also get the privilege of interacting with some of the weirdest, most wonderful, and rarest of species.

But it's not a career for everyone.

There are certain elements of the work that are not just scary - but actually dangerous. Getting up close and personal with a potentially threatening species is no joke.

And the undisputed king of the jungle?

Well, that would have to be the lion. And as much as they're majestic and wonderful, there's no denying that they're also kind of ... scary.

Gren Sowerby is a wildlife photographer.

He's based in Northumberland, in the north-east of the UK, and specializes in music, food, travel, and, of course, wildlife.

And on top of that, Sowerby also has his own official website. It's pretty stunning stuff, and well worth a scroll.

He spoke to the Daily Mail about his recent funny experience.

Sowerby said, "I regularly go on these safaris and really enjoy photographing wildlife. They have grown up around the safari so they're used to cars and tourists."

But there's one creature he has a real reverence for.

"'The King of the Jungle' is always something you've got to capture," he explained.

And recently, he got the perfect opportunity.

"I regularly go on these safaris and really enjoy photographing wildlife. They have grown up around the safari so they're used to cars and tourists."

The pics in question were taken in Maasai Mara, Kenya.

Sowerby was traveling there last month, during which he took a lot of snaps - but he hadn't looked at them until he got home.

He says he saw a lion and lioness about ten to fifteen meters away, and was "taken aback by the sheer size and scale."

The photo session started with "him being very still and quiet."

But it wasn't long after Sowerby started taking the photos that the lion did something expected.

The lion clearly felt the need to pose for the camera.

It let out an enormous roar, which terrified Sowerby - but, ever the diligent photographer, he kept on snapping.

"From him being very still and quiet then for him to let out a big boom was quite something."

But then the lion took it a step further.

After wowing the crowd with its incredible roar, the lion then starts experimenting with some different poses.

Once Facebook user wrote, "Just as well it was an after dinner yawn, otherwise you could have been the main course. Wonderful photo Gren, pleased to hear your back safe and sound."

Some even thought the lion was winking.

It certainly looks like a cheeky smile - as if the lion has just pranked Sowerby by frightening him with the roar.

Either way, it's a pretty cool image of the beautiful animal.

Want to see another interaction with a lion that's rather less respectful? Keep scrolling for the story of one woman who climbed into an enclosure to taunt one.