Lion, Tiger, and Bear Become Lifelong Friends After Being Rescued as Cubs | 22 Words 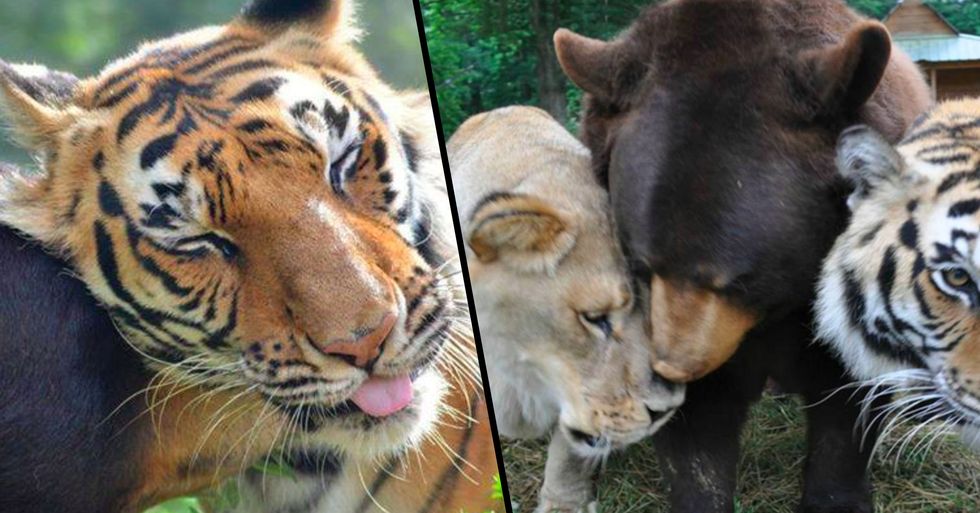 Lion, Tiger, and Bear Become Lifelong Friends After Being Rescued as Cubs

There's something about unlikely animal pairings that just warms our hearts. But even better than an odd couple? Well, that would have to be an odd throuple.

Yep, you read that right. Here we have a lion, tiger, and bear (oh my) who appear to be the best of friends - and our hearts are melting.

Animals are great, obviously - but when 2 different animals become BFFs, well, that's too much for our little hearts to handle.

But a recent animal trio has gone viral.

There are 3 species sharing an unlikely friendship - and it can't just be popular because of The Wizard of Oz, right?

The pictures are just heart-melting.

And what makes the story even cuter? These three were all rescued together as cubs, which explains their strong bond.

Baloo the black bear, Leo the lion, and Shere Khan the tiger all live at Noah's Ark Animal Sanctuary (NAAS) in Georgia.

They were found together in a basement as cubs during a drug raid in the state.

All 3 were suffering badly with malnutrition.

And to make matters worse, they were all infected with parasites, too.

Shere Khan is named after the famous Jungle Book tiger.

He has a more mischevious and affectionate personality, as demonstrated here.

Leo is named after his Latin name.

He's supposedly more stoic than his peers, and loves a good nap. (Who doesn't?)

And Baloo is another Jungle Book name.

He's a confident bear who loves a sweet treat. We can relate!

The 3 have all recovered from their early health issues.

And it's believed their traumatic early start in life has created a bond between the 3.

The 3 are uber-affectionate with each other.

And though they're older now, they still enjoy playing with their best pals. Fancy more cute bears? You're gonna love this guy playing with a ball - we can hardly take the adorableness.