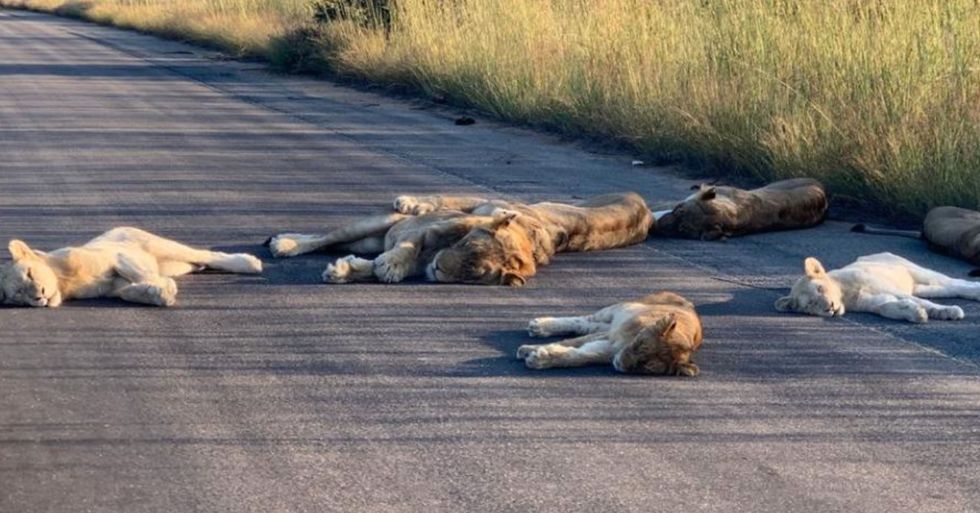 You would think that by the year 2020, trophy hunting would be a game of the past but there are people out there who are still running around, murdering defenseless animals and then cowardly attempting to justify it by calling it a "sport."

However, now that we've been in quarantine for a month or so, humans haven't had the opportunity to disturb wildlife as much as usual and it seems as though animals are using all the free space to their advantage.

Keep scrolling to see the amazing pictures of lions using a road to take their daily nap...

Lions are a trophy hunter's most challenging target.

The animals are often bred in captivity and are released into a fenced-off area where they are cornered in and gunned down by hunters.

And Kruger Wildlife Park ensures the safety of their animals from hunters.

The South African safari park offers a wide range of activities that boast the best qualities of the area.

It is also one of the largest reserves in South Africa.

From wildlife tours to romantic safari getaways, the park is used as a versatile way of getting up close and personal with the wildest animals.

But the park has been closed to the public since 25th March.

Due to the ongoing pandemic, the park has been shut, with only essential work being carried out by workers. As a result, the animals have been free to roam around the large expanse of land.

And incredibly, they have been making good use of the space around them.

On April 15th, a pride of lions were caught snoozing in the middle of a road near Orpen Rest Camp by the ranger, Richard Sowry, who was carrying out the regular checks for poachers.

Naturally, Sowry was shocked to have stumbled across such a rare sight.

Parking up approximately 5.5 yards away from the majestic creatures, he watched in awe.

He then got out his phone to snap some photos.

Of course, if he was re-telling this story, no one would believe him without proof. Keep scrolling to see them all...

And let me tell you, they are amazing.

After the zoo's official Twitter account shared the posts, social media users also expressed their shock at the sight.

This user had a wave of inspiration...

Maybe, after this is all over, we can all be more aware and more kind towards nature.

The post has since racked up over 10 thousand likes.

And as more and more people are introduced to the photos, it seems as if we, as a human race, are realizing how much of an impact we have on the state of wildlife.

Sowry told the BBC this:

"Lions are used to people in vehicles," he explained. "All animals have much more of an instinctive fear of people on foot, so if I had walked up they would never have allowed me to get so close."

"Kruger is a very wild place," he says. "It has been wild and it is still wild. These are difficult times for everyone and the intention was to bring people joy." And trust me, they did!

One user had some advice for us all after he saw these photographs: "Nice," he writes. "Virtual tourism is an ideal alternative avenue you could pursue during this sad time and after the lockdown. We need to keep in touch with nature and wildlife."

And this one is a good close-up:

These shots are incredible.

Richard was in the right place at the right time.

If you're in the mood to see some more amazing animals, then keep scrolling...

Some lucky people witnessed fifty elephants crossing a road in Thailand and it was truly a sight to see...