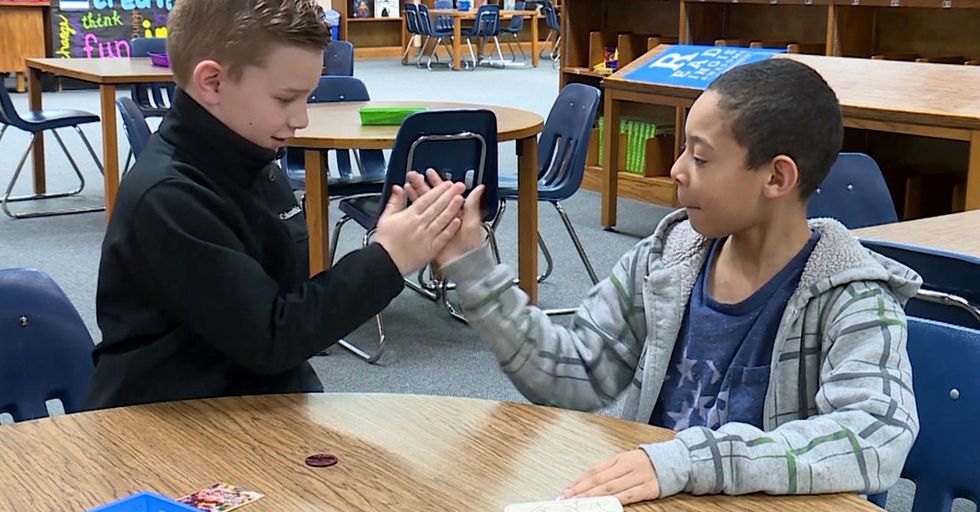 Childhood hunger is a real thing– and it's a serious issue in our world. Sometimes all it can take to turn a day from hungry to hopeful is the generosity of a true and loyal friend. And it is even better if that friend is a third grader who knows how to care for another.

This story here is a particular one. One full of friendship and the kindness of a young soul. If you're looking to smile, then this heartwarming story is for you.

These two pals are Jackson and Mark.

They're absolute besties, and it's obvious that their friendship will serve them well as they grow up. In fact, it's already proving to be a powerful force.

Jackson noticed that his pal was missing some important things that any kid needs during the school day.

Mark was missing both a lunch and a pair of socks. And Jackson wasn't about to let that stand.

Jackson whipped out his wallet and made sure that Mark had enough to get by for the day.

Not only that, but he used some of his own birthday money to do it! What a sweetie.

I know I'm over here hoping that if I'm ever in trouble, I've got a pal like Jackson who will have my back. He seriously rose to the challenge on this occasion.

There are a few ways to react to this...

One is with the joy and tingles you get from seeing pure generosity in action. This is a heartwarming story after all.

Getting to the heart of the matter

@Chubbybunny hit the nail on the head, here. The point of the story is the kindness that Jackson showed when he saw that someone else was in need. It's something we can all learn from.

You might also find yourself astounded that this little cutie has $32 in his wallet! I don't even have $32 in my wallet!

Can this kid take us out to dinner?

Seriously, I could get some quality apps at Applebee's with $32, I am reeling over here. Not only does this kid have the dough but he's willing to share it.

Of course the story doesn't end there.

Mark felt some serious gratitude that his best friend could help him out when he was in a tight spot and made sure his bestie knew how he felt. Honestly, though, we're with you Mark: what even is $32?

Mark did what any self-respecting kid would do.

He bought himself some dang Lunchables. I can only dream of how many sweet, cardboardy pizzas you can buy with $32.

Even the principal noticed.

We're happy to report that Jackson's above and beyond behavior was noticed by the school.

His teacher wasn't the only one to notice.

Commenters found the whole story to be very heart-warming and were quick to recognize how Jackson is wise beyond his years. This kid is going to do amazing things if he keeps on down this path.

We can all learn.

Twitter user @lib_nerd took the opportunity to remind us that we can all learn from Jackson's actions: kids coming to school hungry is a real problem that affects their ability to learn.

What you may not know is that 16.2 million children go hungry in America each year. These children are twice as likely to repeat a grade as children who have adequate food.

While some students get free or reduced cost lunches, in 2016 only 59% of food-insecure households reported that they took advantage of those programs.

Nearly half of all food stamps recipients are children.

That's a lot of kids who aren't certain where their next meal is coming from, who may be reliant on school lunches, or who aren't getting enough food at all.

The impact goes beyond hunger.

A lack of proper nutrition can lead to poor health later in life, but it also affects children emotionally. Many children end up with trust issues, difficulty with focus, or behavioral problems.

Kiddos who don't get enough food when they're very young can impact cognitive, social and emotional development. They may not reach major milestones, and it can even affect their motor skills.

As they get older, these problems can intensify. Children who are food insecure are 7 to 12 times more likely to have problem behaviors like fighting, not listening, or stealing.

It's no wonder this story hits a note with so many people. If only we all had a Jackson on our side.

Jackson did more than feed a hungry friend.

Jackson's actions go beyond helping out a friend in need. He ensured that Mark had the ability to focus through the day without an empty stomach.

If you want to be like Jackson, there are tons of ways that you can help kids from hunger. If you want to get involved, the first thing you can do is call your political representatives to let them know childhood hunger matters.

If political advocacy isn't up your alley, you can also volunteer with a local food organization. It's a great way to make a personal, hands on difference.

If none of those options appeal to you, you can always pull a Jackson and send $32 to the nearest organization fighting childhood hunger. Do it in the name of your best friend.

Generosity is its own reward.

Jackson and Mark will remember this interaction for years, and so will we. One meal can be an inspiration to each of us to act generously.

We're confident that these buds will have each other's backs for a long time. Make sure you shoot a text to your bestie and remind them how much you care today.

They've even got a best buds secret handshake to prove that their bond is real. I guess it's time for me to start working on one with my bestie.

This story is Grinch proof

If this story didn't leave you smiling, at least a little, it's official proof that you're a Grinch. But even Grinches need friends, so why not share a meal with your favorite person today?

At the end of the day, the real question is whether these bros will be getting unlimited Lunchables for life, which is what they truly deserve.

We love these kids!

Whether it's the love of a friend or Lunchables, these friends deserve all the best. We're rooting for you Jackson and Mark!