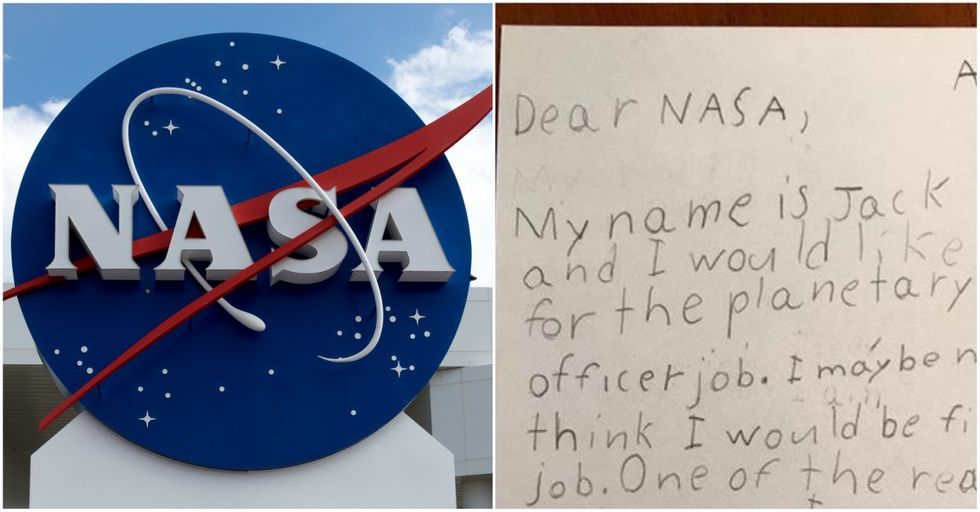 In case you missed it, NASA's officially on the hunt for Earth's mightiest hero.

They've released a job listing for a new role called Planetary Protection Officer. Daily tasks would include protecting our planet from alien invaders.

As you can imagine, once news of this exciting new job broke, space-obsessed applicants flooded NASA with submission. None stood out quite as much, though, as this letter from...a 9-year-old?!

Whether they've been inspired by valid research or the slew of alien-centered storylines presently weaving their ways through Marvel and DC properties, NASA is on the hunt for our planet's next superhero.

Their Planetary Protection Officer would, in the event of an alien invasion, defend the Earth from takeover at all cost. And also get paid a six-figure salary. But we digress...

Sound like a super sweet job? Well, get in line!

All sorts of alien-obsessed applicants have already started throwing their hats into the ring. Make over 100K a year to obsess over aliens and also potentially one day become Earth's mightiest hero? Sign us up!

Still, no application has yet come close to the following letter, submitted by fourth grader Jack Davis...

Naturally, someone in Jack's parents' inner circle found this letter beyond adorable and up on Reddit it went. In no time, other Redditors swarmed the post, completely on board with Jack's argument for why he should indeed be NASA's next Planetary Protector.

I mean, the kid's got clever points!

Honestly, so are we. NASA would be a fool not to take this budding Guardian of our Galaxy up on his proposal. Or at least invite him over for a photo opp.

Some folks even started relinquishing their own futile attempts at landing the job, recognizing Jake as a worthy opponent.

A 9-year-old with both the wit to craft such sound arguments and the gumption to actually send his submission in? This kid's going places! Jack's note even inspired other Redditors to share a few deeply moving memories from their childhoods...

One commenter offered the thread this lovely memory of when they too wrote to NASA...

Leave it to a coalition of rocket scientists to devise the most epic way to blow an entire school of childrens' minds with a surprise gift. What's the likelihood of NASA sending a gift like that in response to a present-day millennial 20-something's equally-ish heartfelt note? Asking for a friend.

We sure hope NASA responds to Jack's letter.

They do have a history of doing that sort of thing. How do we know? Well, thanks once again to Reddit.

Four years ago, another little boy wrote a letter to NASA, and NASA wrote back!

Dexter wanted to go to Mars. So, NASA sent him tons of Mars stuff!

NASA employees even found the Reddit thread about Dexter's letter and started commenting.

What a beautiful way to inspire younger space cadets to continue following their dreams. We too hope both Dexter and Jack get to one day go where very few others have gone.

That it does, folks. That is certainly does.