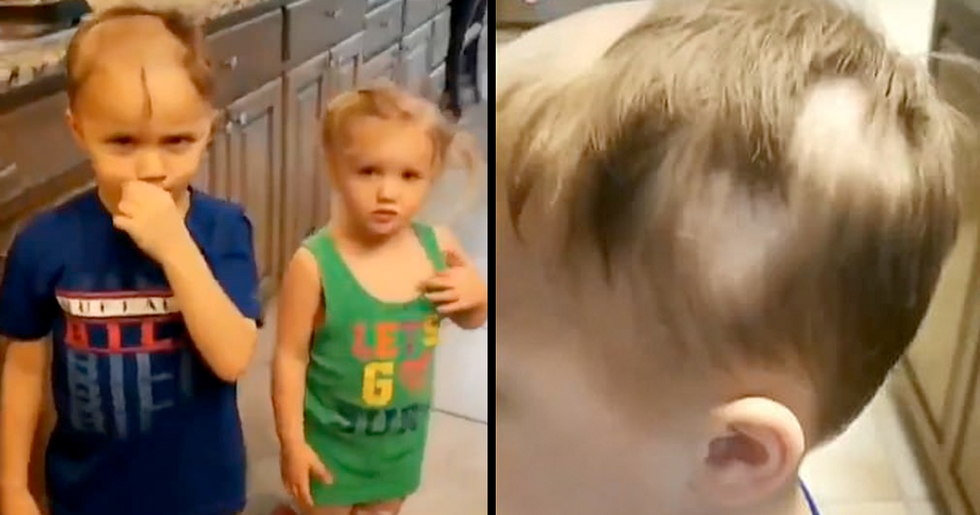 If there's any mischief to be had, you can bet that a child will manage to sniff it out. Even if you turn your back for mere seconds, you can never be too sure what to expect.

A Mom from Texas, recently found this out the hard way when she discovered to her little boy had discovered an electric razor.

He managed to shave not only his own head but also the heads of his younger siblings too.

The flustered mom shared the videos and images of the incident online and they're as funny as they are tragic.

After the incident, she had to make quite an unusual decision as to what to do with her kids' massacred hair.

We've got all the pictures right here, keep on scrolling to see them.

Kids really are the best.

Their innocence and wonder at the world around them is something we adults should try to emulate more often.

But that isn't to say they're always little angels.

In fact, kids can notoriously be as naughty as they are nice - as anyone who's spent significant time with one can tell you.

Which has gained kids another reputation.

They're also known for being a pretty big nuisance - albeit one that parents will always say is totally worth it.

There's something scary about kids left on their own.

They seem to have an innate ability to come up with the most dastardly schemes - and then laugh about them afterwards!

There are a few classic kids "pranks."

Unwinding all of the toilet paper is one of the most common - and luckily, fairly easy to undo.

They rarely mean to do any harm.

After all, kids are just small, barely functional adults, in a world not exactly built for their needs.

Which makes getting into mischief all too easy.

Even if that was never their intention. But sometimes, it seems kids have an intrinsic desire for destruction.

And there's one area where kids tend to particularly excel.

Although it's nothing they should be too proud of, we're talking about the notorious DIY haircut.

There's just something about it kids find hard to resist.

When a child sees a pair of scissors or clippers, they all tend to have the same reaction - "I should cut my hair off."

Which isn't really the best idea.

Because being a successful hairdresser requires a fair amount of skill and practice. And kids? Well, they have neither.

What they do have?

Absolute confidence in their "craft." And some sort of haircut devil sat on their shoulder, encouraging them along the way.

The results are never what you'd hope for.

In fact, most people have a story about a mangled, self-administered haircut during their formative years.

It seems to be a universal impulse.

There is something attractively reckless about the idea of taking clippers to your own head - although in adults, usually good sense prevails.

But it can get even worse.

If an older child gets their hands on the clippers or some scissors, it's not just their hair at risk but their younger siblings too.

Usually, by the time the mischief has been discovered, it's usually too late. Hair grows pretty slowly, so covering up a bad trim can be pretty tricky.

And one Mom learned this to her detriment.

This is Stephie Leigh, a young mother from Texas, USA.

Here she is with her family.

Alongside being a mother to three cute kids, Leigh also works as a nurse.

Here are the three adorable kids.

But Leigh recently made a horrendous discovery.

Her kids were looking a little less cute than normal, thanks to some self-administered haircuts.

She started the video she shared in tears because of the aftermath of Teddy's clipper spree.

Teddy had given himself an unusual 'do.

He'd clipped off all the hair at the crown, but left himself with curtains at either side - sort of like a baby monk.

But Eloise suffered an even worse fate.

Her two pigtails remained intact in the front - but once she turned around, it was clear she'd got a pretty bad deal. The entire back of her head was bald!

Leigh shared the incident on her Instragram story, where it quickly gained the attention of the internet.

At first, Leigh was pretty upset.

It's quite understandable, given the initial shock of the situation. She even begins the video in tears.

But it's clear Leigh is pretty resilient.

She quickly puts on a brave face to avoid upsetting the children and concedes that it's only hair, after all.

Leigh had a pretty innovative solution to the trims.

She decided there was no rescuing the butchered haircuts, and instead opted to shave the remaining hair and start again.

Leigh also shared their new looks on her Instagram.

It seems the pair aren't too upset about their new, high-fashion vibes.

We have to say, we kind of like it.

Not only do they look pretty cute - but it's great to see that they haven't let one dodgy haircut get them down!

After all, it is only hair.

It always grows back in the end - so there's no point getting too upset about it!

Although we're sure Leigh will be hiding the clippers in the future.

As will we. Thanks for the cautionary tale - and for being such good sports about it!