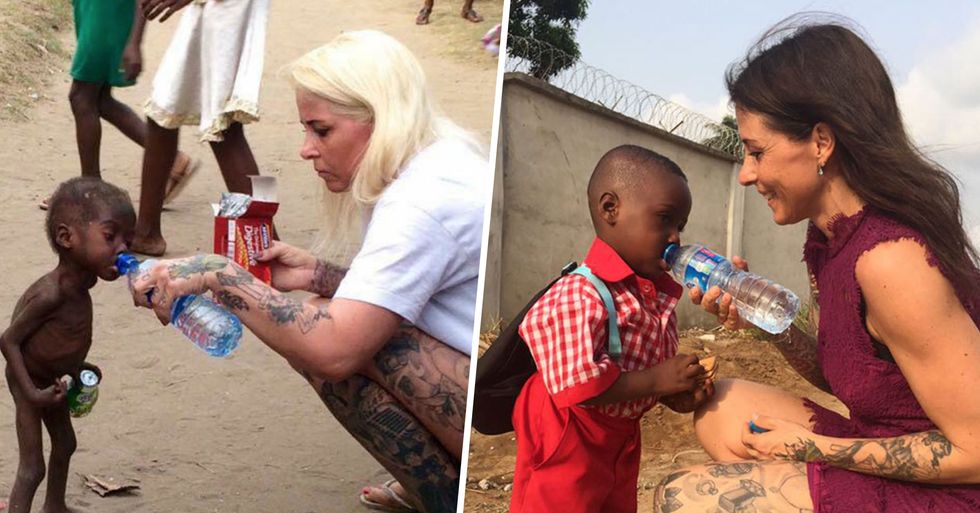 In January 2016, a haunting photograph was released of a starving boy on the edge of death.

That very boy was rescued by a Danish aid worker and has undergone the most miraculous recovery.

Keep scrolling to see his transformation...

It was a rescue mission in Nigeria.

The Danish aid worker, Anja Ringgren Lovén, was on a rescue mission when she spotted the starving boy.

He was on the edge of death...

The photograph captures the first few moments the pair shared together.

It shows Lovén offering the frail boy a drink out of her water bottle.

Anja works for DINNødhjælp translating to "your relief."

This is how she found the abandoned boy.

He was named Hope.

The organization rescues children that have been branded "witches." They are often tortured and killed by their own parents, who have no money to treat them.

It's a tactic used by religious leaders.

Some religious leaders in Nigeria accuse children of witchcraft in order to get money from poor families to pay for exorcism services.

Anja and her team are on hand.

They combat this terrible practice by offering shelter to the children accused of witchcraft.

She said: “Thousands of children are being accused of being witches and we’ve both seen torture of children, dead children, and frightened children."

Hope was only 2-years-old.

He had been wandering the streets for 8 months before the team found him suffering from worms and malnutrition.

It is all thanks to Anja and her team.

Just 1 year later, and he is a completely different little boy.

He is now attending school for the first time.

He has done incredibly to recover from the devastating condition they found him in.

He slowly started to gain weight.

Just 8 months after being discovered, things started to look up for Hope.

It was a new lease of life for the little boy.

He was even pictured getting a new haircut!

Hope has now made a full recovery.

He is completely unrecognisable from before!

He now lives in an orphanage.

With other children that have also been cast out as "witches."

The orphanage is run by Anja.

As well as her hardworking team, who have given Hope the family he deserves.

Saying: “All children have rights and those rights must be protected, always." The love and care this organization shows has saved countless children from an unnecessary death.