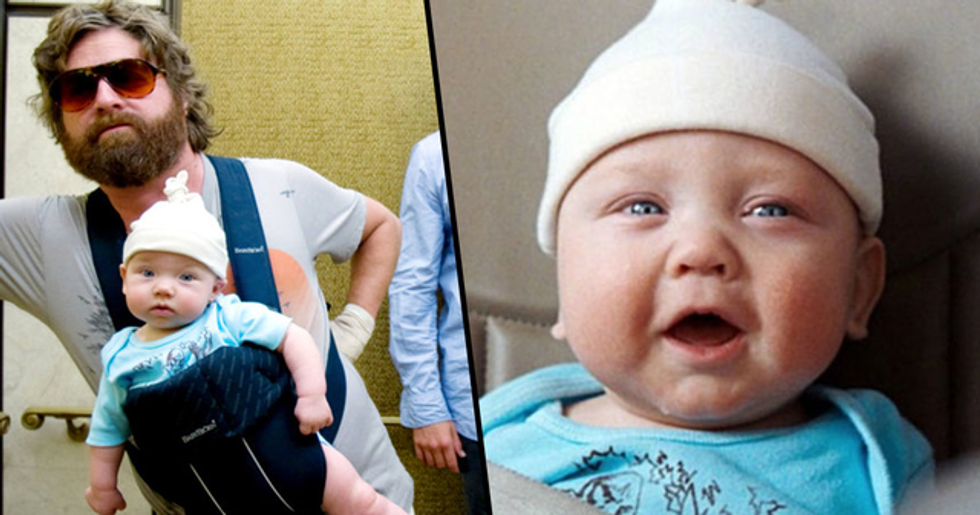 Warning: This article is going to make you feel old.

It's been an entire ten years since The Hangover aka the bachelor party of every man's dreams, graced our screens. The movie, which features A-listers such as Bradley Cooper, Zach Galifianakis, and Mike Tyson, depicted an out-of-hand bachelor night in Vegas and has remained iconic in the world of Hollywood ever since.

Perhaps the most memorable part of the film was the unfortunate baby, Carlos, who the guys "adopt" while on their adventures. The baby stole the spotlight from his co-stars and even went on to appear in the sequel, The Hangover Part III.

But what is baby Carlos doing now? Well, as it happens, there was more than one baby Carlos - twin babies were actually used in the production of the film! The twins are now eleven years old, and they're so cute! Keep scrolling to see the twins all-grown-up and for a peek at an interview with the mother of the kiddies - it's revealing for sure.

The Hangover was released in cinemas in 2009.

Yep, that's an entire decade ago. The iconic movie has been with us for a staggering 10 years now and it feels like only a minute ago that it was showcased for the first time.

The film tells the story of a bachelor party in Las Vegas.

The Hangover follows the misadventures of a group of friends embarking on a bachelor party for their friend, Doug, in a celebration of his impending wedding.

After a mix-up of drugs, the group lose the bachelor.

The main character, Alan, who is portrayed perfectly by Zach Galifianakis, accidentally laces his friends' drinks with the Date Rape drug (as you do...), which then descends the movie into a blurred evening of chaos.

The bachelor, Doug, is nowhere to be found the following morning.

Stu, Phil, and Alan, who, by the way, is the black sheep of the group, have to find their friend and bring him home in time for his wedding, which is fast approaching.

The journey to finding their friend is quite ridiculous.

Losing your buddy on a night out in Vegas. Anyone's worst nightmare, right? Throughout the duration of the film, the guys find themselves in hilariously silly situations while hunting down their still-missing friend.

They find themselves in some sticky situations.

Due to their lack of memory from the night before, the guys begin by painstakingly re-tracing their steps. This is after they've woken up in their trashed hotel room with a chicken and a tiger, by the way.

But before finding Doug, they steal a police car. Because... Vegas.

After getting arrested for stealing the car, they are then "made an example of" by the police in front of a class of school children, where Alan famously gets called a "fat Jesus" before being tasered.

And their antics from the night before begin to gradually unfold...

As the film progresses, vague memories from their rampage through Vegas start to come back to them...

Just when you were thinking that this film couldn't get any more ridiculous... They ended up hanging out at his house, where poor Alan got knocked out by a single Tyson punch. Ouch.

They win big at the casino.

When they're unable to locate their winning casino chips from the night before, they attempt to win the thousands of dollars back with the help of Alan, who is unexpectedly an excellent hand at Black Jack.

And they have a run-in with drug lord, Mr. Chow.

It turns out that they got friendly with Mr. Chow the night before and had promised him half of the casino winnings... which they have since lost. Not the best situation to get yourself into, is it?

On top of all this ridiculousness, they temporarily "adopted" a baby.

Oh, did we forget to mention that? Upon waking up in a hotel room with a live tiger, they also find a baby, whom they had become temporary guardians to the night before.

And the baby quickly became the star of the movie.

The little boy, who Alan named Carlos, stole the hearts of viewers across the world.

Turns out, his mom was a stripper.

The night before, one of the guys had struck up a romance - and an impromptu Vegas wedding - with a stripper. They then decided that they would look after baby Carlos (who was originally named Tyler), while his mom went back out to work. You can't get more Vegas than that, can you?

Alan carrying baby Carlos in a papoose has become a famous image worldwide, and it has become a classic "Dad in Vegas" look.

The pair have even become a popular Halloween duo-costume.

Though we hope that these babies aren't exposed to live Tigers like poor Carlos was...

Not that he seemed too bothered...

The blue romper, the white hat, and the oversized aviator sunglasses became instantly recognizable and made baby Carlos a much-loved figure across the world.

So, who played Carlos?

It turns out that there wasn't just one Carlos. There were several.  A total of 8 different babies played Carlos in the first movie!

Because babies can only be used on set for a short amount of time (mainly due to their feeding and sleeping patterns), it's common to use several different babies for the same role.

The baby that we all know and love was primarily played by twins.

A set of twins were used for the bulk of Carlos' scenes and they took up the most screen-time for the role of baby Carlos. Confusing, we know...

The grown-up Carlos'! Yep, one of the baby Carlos' was a girl.

Their mother is a photographer.

She did admit that she was concerned about her babies' well-being on the set.

Any parent would be. In an interview, she admitted her worries while her babies were on the raunchy set: "I was so concerned with the safety and temperament of my baby, that I didn't realize what the actors were doing and trusted their choices". Awkward...

As for the controversial scene at the table...

Carrie continued, "It was only after the footage was in the can that the child welfare worker asked me if I was okay with the content. As for the physical comedy, there was a stunt baby for that". Thank goodness for that.

Their mom explained that "both Avery and Grant worked about 15 days, so that was a nice little seed at 6 months old". And Grant still has money coming in from his role in The Hangover Part III.

In which scene did the Holmquist twins first appear?

Carrie recalls that they were unable to attend the first few days of filming. "My family was not available for the first two or three days of filming on the Hangover, and the pool scene at Caesars was the very first scene of the first job my kids ever worked". But the twins ended up becoming the first choice for the baby Carlos role.

And the cast were also big fans of the twins.

Carrie remembers the way that the cast were with her kids: "They seemed really excited to see us and loved being with the babies. I have some priceless shots of Grant snoozing in the carrier on Zach’s chest during a break".

Are the kids old enough to watch the movie themselves yet?

It's a no from Carrie. For the moment, anyway... "They probably can watch it once they hit high school and can appreciate some of the situation jokes more," though she admits that they've both watched their own scenes.

And the twins have actually been back to Vegas!

Carrie explained how she's taken the kids back to the fateful set, "We saw the 'Hangover' slots and Wolf Pack gear at Cesar's Palace, and I took them through the Valet driveway too". These twins have had a unique start to life, to say the least. We're just waiting for their own version of The Hangover... When they're twenty-one, of course.