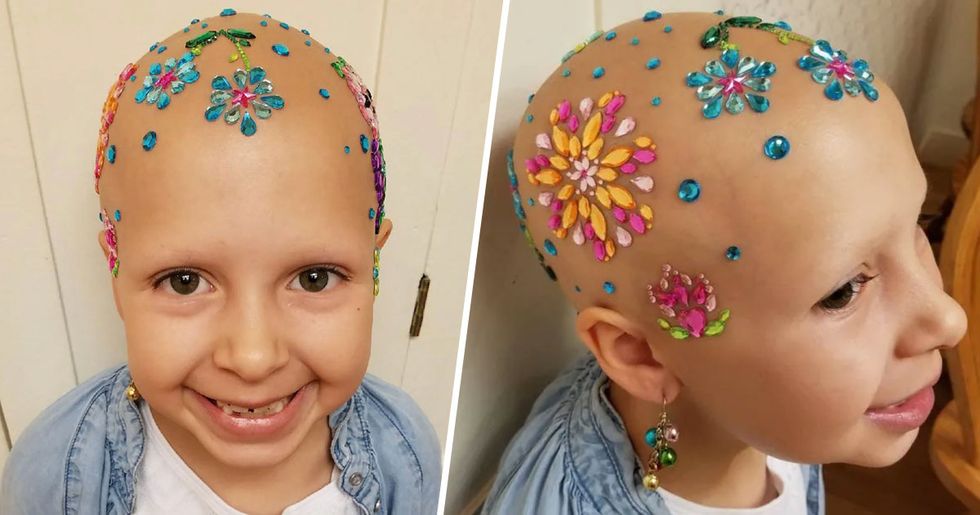 For many people, their self-confidence is wrapped up in their hair, and it's hard to imagine a life with none. But 9-year-old Gianessa Wride, who has alopecia, doesn't let it stop her.

When crazy hair day at school rolled around, Gianessa and her mom, Daniella, were understandably nervous. After all, how do you do crazy hair when you have none? But, determined to get involved regardless, the little girl certainly didn't let her lack of hair stop her and rocked the most amazing look for the themed-day.

With the help of her mom, Gianessa's scalp was transformed into a beautiful piece of art that left many of her classmates envious of her dazzling look.

Keep scrolling to see her crazy-hair look for yourself.

Alopecia is a medical condition that causes hair loss.

The auto-immune condition causes hair to begin to fall out in circular patches, and can even cause those diagnosed with it to lose all their hair.

The condition occurs when the immune system attacks the hair follicles.

Hair loss can occur on the scalp and in some cases the eyebrows, eyelashes, and face, as well as other parts of the body.

In some cases, the condition can also prevent hair from growing back.

Alopecia can result in complete hair loss, called alopecia universalis, and can prevent hair from growing back entirely. If/when hair does grow back, it’s possible for the hair to fall out again.

The illness is unpredictable.

Hairloss associated with the condition is unpredictable and research shows that it occurs spontaneously.

However, the extent of hair loss does vary from person to person.

Hair loss and re-growth completely depend on the individual, as the condition affects people differently.

Although, there are treatments that can aid hair growth and increase the rate in which it grows back, as well as preventing future hair loss. For example, several over-the-counter medications are available to rub directly onto the scalp, as well as steroid injections for mild forms of the condition.

And, of course, there are also ways to cover up hair loss.

From wigs to headscarves, there are an array of options out there to cover up the hair loss and bald patches.

Although some people prefer to embrace their baldness.

Numerous people with the condition don't let it stop them and are more than happy to be completely themselves, hair or no hair. Either way, it's a completely personal choice!

The 9-year-old from Salem, Utah, was diagnosed with the condition in 2017, after her mom noticed a bald spot on the back of her head that was the size of a quarter.

The hair around her temples was also beginning to thin.

A visit to the pediatrician and the dermatologist confirmed Gianessa’s alopecia diagnosis.

Soon, her hair was completely gone.

Mom, Daniella, who is a nurse, believes that Gianessa's hair loss was triggered by the stress from her grandmother's death.

The little girl chose to have what was left of her hair cut off.

Many of the treatments available for alopecia are short-term and aren't always effective, so, instead, Gianessa chose to embrace her new look.

Gianessa has tried wigs and scarves.

Although she often chooses to rock her hair loss without covering it up.

Shortly after her diagnosis, her school's annual "Crazy Hair Day" came around.

Understandably, Gianessa and her mom were a little nervous about the day.

But she wasn't going to let alopecia stop her.

Despite feeling apprehensive, Daniella came up with a creative look for the day that would celebrate her daughter's hair loss.

So, Daniella hit the craft aisle in Walmart.

The mom-of-3 found a pack of jeweled scrapbooking stickers and thought that the bright colors and intricate designs would perfectly match her daughter’s dazzling personality.

And the result was amazing.

Gianessa picked the design that she wanted and her mom arranged the stickers on her scalp.

Speaking to HuffPost, Daniella said that the look fitted her daughter's personality "perfectly," and that, despite initially being nervous about what people would think, Gianessa was "ecstatic" when she looked in the mirror.

The best thing? She ended up winning "Crazy Hair Day."

Her classmates were starstruck by her sparkling jewels, and her ensemble ended up seeing her crowned the winner on the day. "She opened the car door in the car drop-off lane and kids were already telling her that it was amazing and awesome and that they wish they could do it and that it looked so great," Daniella explained. “When she got home from school she told me they all told her that they absolutely loved her crazy hair."

“She's is so brave and beautiful," said a very proud Daniella. “The sheer determination and confidence rolls off in waves from this tiny girl. I just love her!" You go, girl! Many other people with the hair loss condition are also embracing it. Like bride-to-be, Makenzee Meaux, who decided to bravely remove her wig during her engagement photoshoot. The pictures are beautiful. Keep scrolling to check them out.