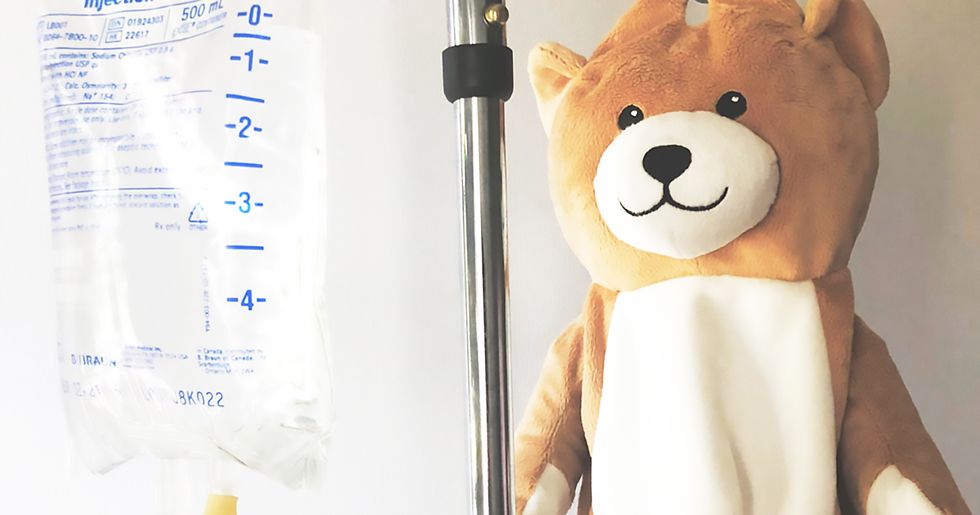 Steel yourself, because this story is going to make you cry. But not in the "Oh god, what is the world coming to?"-sort of way we usually cry — it'll make you cry because it is happy and sad in equal parts.

A little girl named Ella Casano was diagnosed with idiopathic thrombocytopenia purpura, otherwise known ITP. That's the sad part. But what's happy about this story is that what she's doing with that diagnosis is actually very sweet and thoughtful and maybe even kind of inspirational?

Since her condition forces her to regularly go to the hospital, Ella saw a lot of IV bags dangling over her, looking all bleak and intimidating. So she decided to cover them up with joy.

Ella invented the Medi Teddy, a cute little teddy bear who can cover up the IV bags. And since she figured IV bags and other medical equipment were probably freaking out other kids, she's working to mass-produce Medi Teddys.

Millions of children go to the hospital each year.

The Connecticut Hospital Association suggests that 3 million kids a year are hospitalized. It's sad every time, and just feels... off. Because hospitals aren't where kids belong.

Where do kids belong?

Kids belong either outside, runnin' all around and getting dizzy, or in the living room, playing video games and getting the controllers all sticky. Maybe the bank, if their mom or dad doesn't have anywhere to drop them off.

And pediatricians do that mostly by humoring kids and putting their stethoscopes up to whatever nonsense toy they bring along with them. And god bless them for doing that — I know I wouldn't have the patience to take the heartbeat of a GI Joe.

But for kids, the hospital experience is almost always scary.

I know this because I got my tonsils out when I was, I don't know, seven, and I knew I'd get endless ice cream and Game Boy games afterward. But I was still terrified.

All that medical equipment sitting around doesn't help.

Between all the computer screens and defibrillators and MRI machines and EKGs and IV bag drips, it's hard for kids not to think they're always one bad cough away from becoming a medical experiment.

There has to be a way to hide it all.

How has the technology we use to hide TV cords in the walls not trickled down to hospital equipment? No children are overwhelmed with fear when they see TV cords! (Unless they're really into interior design, which, I don't know, maybe some kids are?)

And who better to find a way to hide that medical equipment than someone who deals with it on the regular?

This is Ella Casano, age 12, and she's got a great idea to make the looming terror of medical equipment a little easier for kids to deal with when they go to the hospital.

This condition makes Ella more likely to be injured or bleed during certain activities because her blood is platelet-deficient. As Ella puts it on her website, "Many kids who get this grow out of it within a few months, but for me it’s never gone away. That makes me a pretty rare case."

Her condition can be managed, but not cured.

There's no single solution that will cure Ella of ITP, but she does have a few options, including going into the hospital for an IVIG infusion, which increases her blood platelet count.

So while she's pretty used to the hospital by now...

For years now, Ella's gone to the hospital for an IVIG infusion every eight weeks. You have to imagine she knows all the front desk and gift shop employees by now.

... that doesn't make the hospital any less scary.

Come on, it's still so terrifying! This is how medical stuff appears to kids — it looks like an overhead laser is about to cut them open and jostle their kidneys all around.

Ella, then, decided to make that equipment cheerier.

Why, it's always a positive step to change something that once looked sad into something that looks happy! That's why we all love The Joker, America's most beloved public figure!

Ella's Medi Teddy, an adorable little sack of joy that can make any hospital visit less upsetting, is a pretty genius idea, and is almost certain to make a number of kids less anxious.

Medi Teddy is designed to cover up IV bags.

On her website, Ella wrote, "When I had my first infusion, I was surprised and a little bit intimidated by the look of the amount of tubing and medical equipment on my IV pole." Ella decided that, instead of looking at sterilized medical equipment, she'd rather have a little friend hanging by her bed side.

When I first saw the Medi Teddy, I was like "why doesn't the IV bag go inside?"

Initially, I thought the IV bag should just slide inside the bear and be completely covered up. That way, even if a gust of wind made the bear/bag rotate, the IV would still be hidden.

But then I realized nurses would still need to check it.

It's not like nurses could just unzip the bear, pull out the IV bag, do that weird flicky thing they do to IV bags, and put it back without completely traumatizing the child watching. It'd look like their favorite bear was getting their guts pulled out!

But now it kind of looks like the teddy bear has on a sweet backpack.

Ella started making Medi Teddys on her own before hospital visits.

Ella's mom, Meg Casano, talked to CNN and said, "[Ella] cut up a stuffed animal and used a hot glue gun and made her very first Medi Teddy." It's all very much a Frankenstein-sort of deal, but, like, a cute Frankenstein, so it's okay.

And Ella got great feedback from the nurses.

You know, I'm sure the hanging bears are a nice change of pace for the nurses too. They spend their entire working lives at the hospital — you have to imagine they're pretty much over looking at all that medical equipment themselves.

Her plans go beyond making Medi Teddys for herself. Still writing on her website, Ella said, "As I saw more and more children experiencing the same feelings, I became more interested in creating a friendlier experience for young IV patients, so I created Medi Teddy!"

She recently launched a GoFundMe to mass-produce Medi Teddys.

Thank god — a good use for GoFundMe. If I get one more invite from my buddy Kelvin asking me to help "chip in on my rent brah, times are rough," I will honestly consider not donating.

And her goal was shattered.

This is clear evidence that the internet is touched by Ella's idea. We all want to ease the suffering of kids who have to go to the hospital, and Ella's GoFundMe is a small way to do that.

Ella and her family are trying to make Medi Teddy a 501(c)3 non-profit.

While the idea of setting up a non-profit is incredibly noble, my god it sounds so complicated. I imagine you'd have to fill out forms and find notaries and, I don't know, reference cross-sections.

Meaning she wants to give out Medi Teddys to kids all over the world.

Ella's goal isn't to make maximum profits off of Medi Teddys. She just wants to give them to the kids they would help. We could soon see one of these adorable faces in every pediatric hospital in the nation.

It's one thing to figure out a way to make yourself less afraid...

This would have been a cool story on its own if Ella had made a single Medi Teddy, hung it up over her IV bag, and found the courage to continue doing what she has to do.

... But it's another thing entirely to help make other people less afraid.

But that's not all she did — Ella took her Medi Teddy idea and used it as a starting point to help other people going through the same thing she is.

What Ella's doing here is so thoughtful.

Let's not forget, Ella Casano is sick. I don't know how you are when you're sick, but I curl up in a blanket and pound cans of chicken noodle soup like they were Bud Lights at a frat party. The idea of helping someone else is never further from my mind than when I'm sick.

Also, every one of Ella's Instagram posts are dedicated to other hospital-bound kids.

It's a good reminder that even the terrible things that happen to us...

... are opportunities to help other people.

But we do get to decide how we react to that chaos. Obviously Ella Casano didn't choose to get sick, but she did choose to use that awful experience to lessen the pain of other kids going through it. And that is truly just the nicest thing.